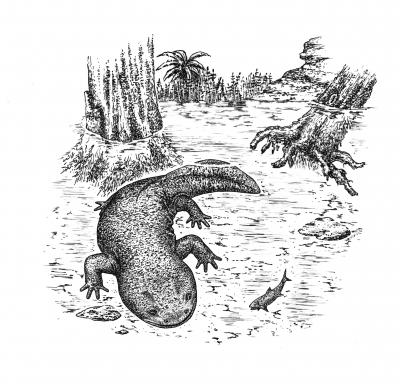 IMAGE: A group of Russian and German palaeontologists have described a previously unknown genus and species of prehistoric salamanders. The new amphibian is named Egoria malashichevi -- in honor of Yegor...

The palaeontologists found the remains of the ancient amphibian at the Berezovsky quarry, a fossil locality in the Krasnoyarsk Krai near the town of Sharypovo. Fossils of ancient fish, various reptiles, mammals, herbivorous and predatory dinosaurs have been previously found there. The research materials were collected on field expeditions in the mid-2010s. In these expeditions the scientists from St Petersburg University worked alongside experts from the University of Bonn (Germany), the Tomsk State University, the Zoological Institute of the Russian Academy of Sciences, and the Sharypovo Museum of Local History and Nature.

Four vertebrate fossils enabled the scientists to declare the finding of a new genus and species. These were: three trunk vertebrae and the atlas - the first and, in the case of the salamander, the only cervical vertebra. Since the atlas is a highly specialised vertebra, providing for attachment and rotation movements of the skull, it has a rather complex structure, the scientists explain. It is therefore most suitable for describing a new species as it provides much information for analysis. The amphibian proved to have belonged to the geologically oldest stem salamanders.

It was not the first time that remains of ancient salamanders had been found at the Berezovsky quarry. One of them - a basal stem salamander Urupia monstrosa, named after the nearby Uryup River - was about 50-60 centimetres long. Another one - Kiyatriton krasnolutskii - was named after a local historian Sergei Krasnolutskii, the discoverer of the fossil locality Berezovsky quarry. By contrast, this one was quite small in size (about 10-15 centimetres) and looked more like modern Hynobiidae. The newly discovered salamander, judging by the size of the vertebrae, was of medium length (about 20 centimetres).

'Salamanders first appear in the fossil records in the Middle Jurassic, including representatives of both the present-day salamander families and the most primitive ones,' said Pavel Skutschas, associate professor of St Petersburg University, doctor of biology, expert in Mesozoic vertebrates. 'When they had just appeared, salamanders made efforts to occupy different ecological niches. Thus, the stem salamanders filled the niche of large water bodies; while those close to the present-day salamanders found their niche in small water bodies. As for the newly discovered salamander, it occupied a middle position, although morphologically, it is closer to the primitive.'

The scientists not only described the external characteristics of the specimens, but were able to look inside the fossils. In this they were assisted by the experts from the 'Centre of X-ray diffraction studies' at the Research Park of St Petersburg University, where the specimens were scanned on up-to-date microtomography scanners. Based on the obtained data, the palaeontologists created 3D reconstructions of the vertebrae and described their internal structure. As expected, it proved to be very similar to that of the large stem salamanders.

The ancient amphibian received the name Egoria malashichevi - in honour of Yegor Malashichev, associate professor of the Department of Vertebrate Zoology at St Petersburg University, who, among other things, studied the morphology of caudate amphibians. 'Yegor Malashichev was a wonderful person and a very talented scientist. He supported aspiring palaeontologists and did everything to help them to stay in scientific research,' remarked Pavel Skutschas. Additionally, Malashichev studied the phenomenon of lateralisation (body asymmetries associated with the functioning of the nervous system), as well as other asymmetries in motor performance and visual perception. Yegor Malashichev's professional career was almost exclusively connected with St Petersburg University. In 1996, he graduated from the Faculty of Biology and Soil Science. In 2000, he began to teach there, and in 2003, he defended his dissertation and was awarded a PhD in biology. Sadly, in late 2018, he passed away unexpectedly.

The next step for the palaeontologists is to compare the bones of the 'Berezovsky' salamanders with the fossils from Great Britain: the 'Kirtlington' salamanders which were found at the Kirtlington quarry in Oxfordshire. The Siberian and British faunas of the mid-Jurassic time were very similar. Besides, the palaeontologists are aware of similar amphibians that lived in the territory of present-day England. 'They may be representatives of the same genera. However, to ascertain this, a detailed comparison of the palaeontological collections is required. In the coming spring, our colleagues from England will come to St Petersburg to study our research materials. We may discover that Urupia and Egoria used to have a very wide habitat, extending across Europe and Asia,' mused Pavel Skutschas.