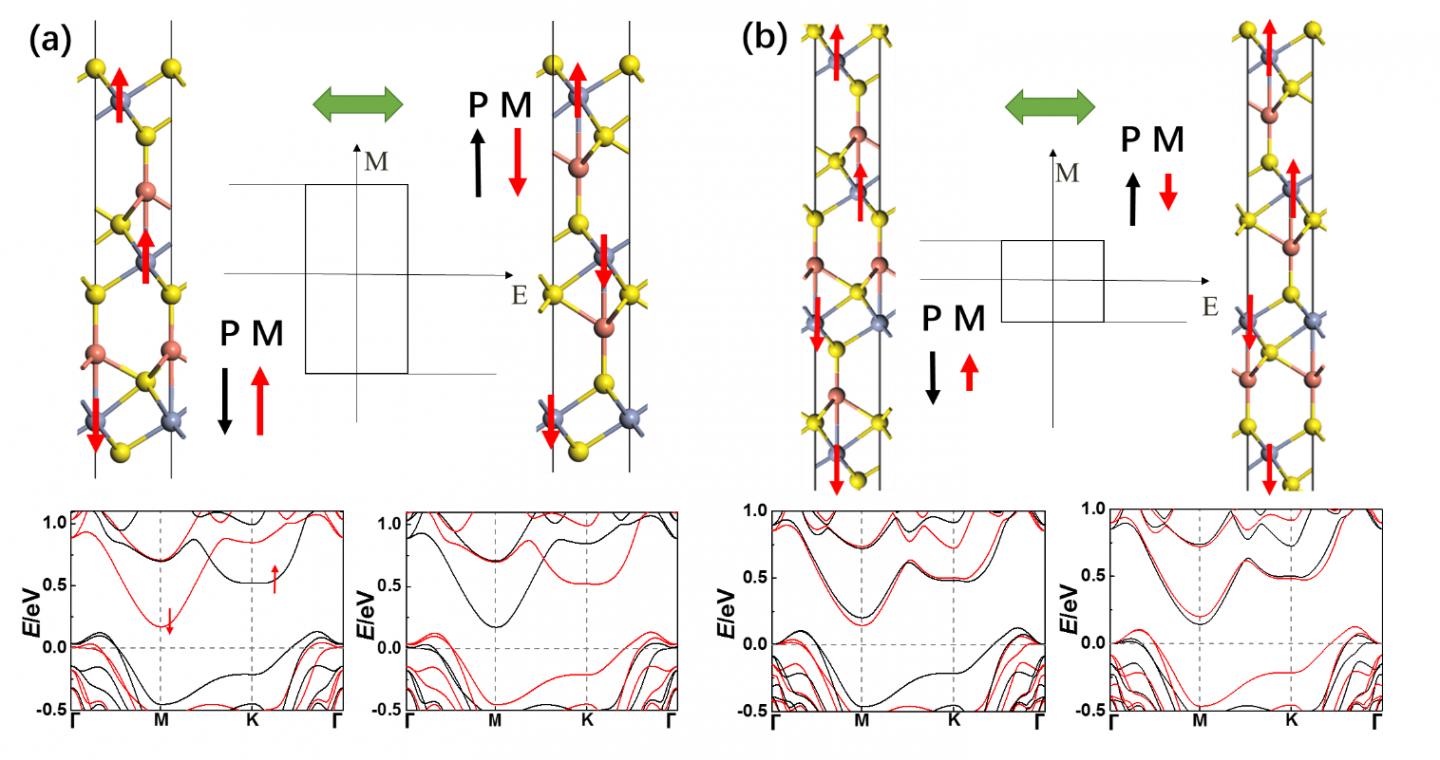 IMAGE: The change of spin distribution and bandstructure upon FE switching for (a) Cu2(CrS2)3 and (b) Cu3(CrS2)4. Black and red arrows in the sketches of M-E loops denote the direction of...

2D multiferroics with magnetoelectric (ME) couplings have also been explored, which are highly desirable for realizing efficient "magnetic reading + electric writing". Multiferroic materials which are both FE and magnetic are rare in nature due to the mutual exclusive origins of the two orders (empty d shell for conventional FE order and partially filled d shell for magnetic order). Meanwhile, for traditional multiferroics, the ME coupling is weak in type-I multiferroics with ferroelectricity and magnetism arising respectively from different mechanisms, while for type-II multiferroics where ferroelectricity is induced by magnetic ordering their spin-driven FE polarizations (mostly

In a new article published in the Beijing-based National Science Review, scientists at Huazhong University of Science and Technology and at the Nanjing University, China present a first-principles predictions of 2D multiferroics with robust and diversified magnetoelectric couplings: thin-layer CuCrX2 (X=S or Se).

"Theoretically, the mutual exclusion between ferroelectricity and magnetism or between high Curie temperature and strong magnetoelectricity in traditional multiferroics can be avoided here." they state in an article titled "Room-Temperature Multiferroicity and Diversified Magnetoelectric Couplings in Two-Dimensional Materials." "The vertical ferroelectricity is neither induced by empty d-shell nor spin-driven, giving rise to an alternative possibility of resolving those intrinsic exclusions and contradictions."

"Tri-layer Cu-intercalated CrX2, denoted as Cu2(CrX2)3, is still completely FM for X=Se while Cu2(CrS2)3 possesses much more complex spin configurations. Although the magnetic coupling is FM in-plane for Cu2(CrS2)3, we still need to check various possible configurations of interlayer coupling as listed in Table. S3. The FM state is higher in energy compared with three ferrimagnetic states, and the ground state turns out to be the configuration in Fig. 4(a), with a total magnetization of 2.62 μB/f.u.. When the polarization is aligned downwards, the middle layer is FM coupled with the top layer while AFM coupled with the down layer; as the polarization is reversed, according to the symmetry, the middle layer should be AFM coupled with the top layer and FM coupled with the down layer in the ground state. The energy will be lowered by 16.4 meV with the magnetization reversal of the middle layer, which should take place spontaneously considering the small barrier of spin switching equivalent to the spin anisotropy energy (

"Their ferromagnetism can be stabilized due to enhanced carrier density and orbital shifting by the vertical polarization, and the Curie temperature of both ferromagnetism and ferroelectricity can be above room-temperature. Layers with different thickness may exhibit diversified types of magnetoelectrics for efficient magnetic reading + electrical writing due to the gradient of interlayer coupling parameter, where a considerable net magnetization can be reversed upon FE switching." they add. "Our prediction does not only exploit new types of multiferroic couplings in 2D, but also propose a way of constructing robust multiferroics for practical applications, which may stimulate experimental efforts concerning the recent synthesis of previously predicted intrinsic 2D ferroelectrics."