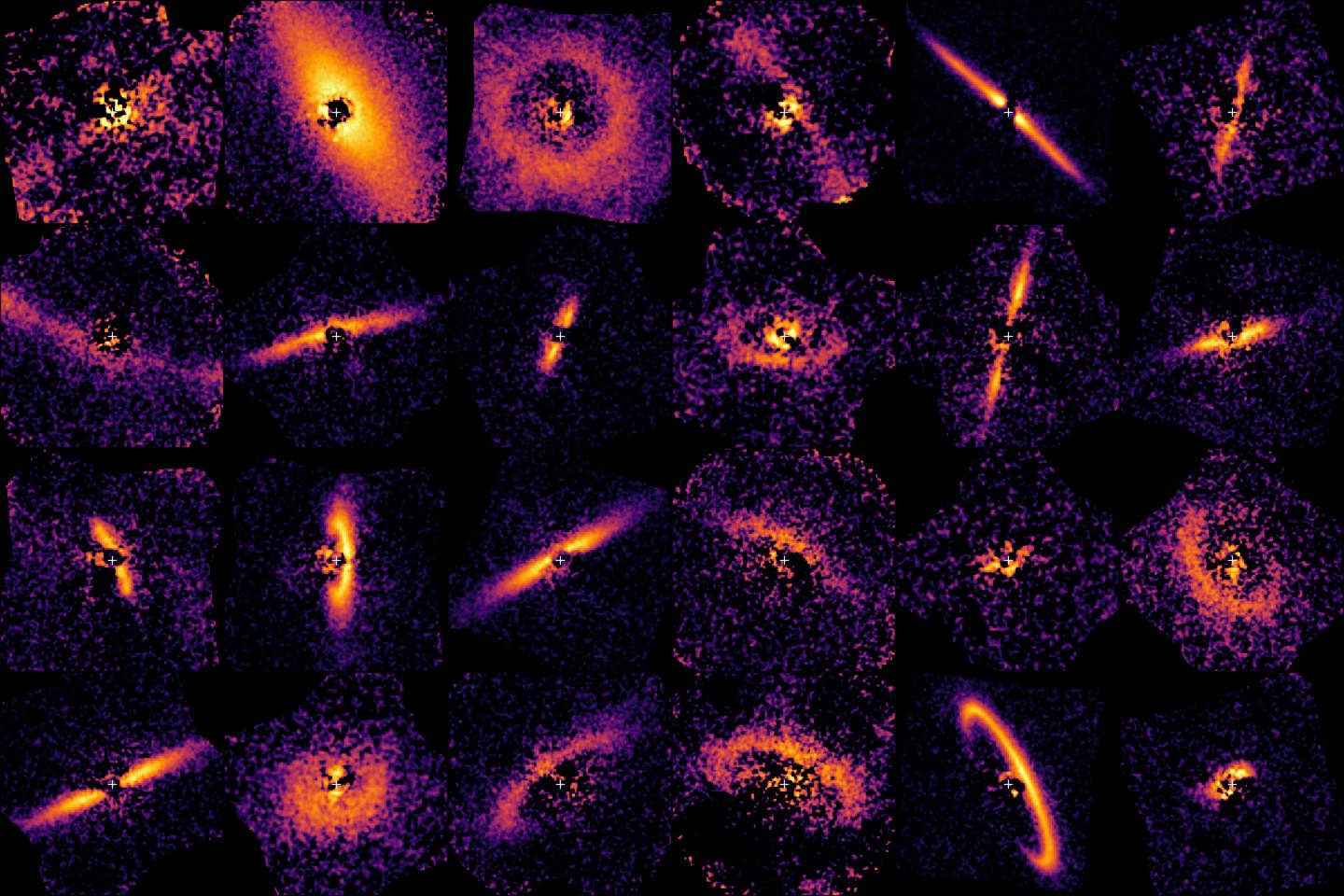 IMAGE: This figure shows the dust rings around young stars captured by the Gemini Planet Imager Exoplanet Survey, or GPIES. The rings show a diversity of shapes and sizes, made more...

Astronomers this month released the largest collection of sharp, detailed images of debris disks around young stars, showcasing the great variety of shapes and sizes of stellar systems during their prime planet-forming years. Surprisingly, nearly all showed evidence of planets.

The images were obtained over a period of four years by a precision instrument, the Gemini Planet Imager (GPI), mounted on the 8-meter Gemini South telescope in Chile. The GPI uses a state-of-the-art adaptive optics system to remove atmospheric blur, providing the sharpest images to date of many of these disks.

Ground-based instruments like GPI, which is being upgraded to conduct similar observations in the northern sky from the Gemini North Telescope in Hawaii, can be a way to screen stars with suspected debris disks to determine which are worth targeting by more powerful, but expensive, telescopes to find planets -- in particular, habitable planets. Several 20-, 30- and 40-meter telescopes, such as the Giant Magellan Telescope and the Extremely Large Telescope, will come online in the next couple of decades, while the orbiting James Webb Space Telescope is expected to be launched in 2021.

"It is often easier to detect the dust-filled disk than the planets, so you detect the dust first and then you know to point your James Webb Space Telescope or your Nancy Grace Roman Space Telescope at those systems, cutting down the number of stars you have to sift through to find these planets in the first place," said Tom Esposito, a postdoctoral fellow at the University of California, Berkeley.

Esposito is first author of a paper describing the results that appeared June 15 in The Astronomical Journal.

Comet belts around other stars

The debris disks in the images are the equivalent of the Kuiper Belt in our solar system, a frigid realm about 40 times farther from the sun than Earth -- beyond the orbit of Neptune -- and full of rocks, dust and ice that never became part of any planet in our solar system. Comets from the belt -- balls of ice and rock -- periodically sweep through the inner solar system, occasionally wreaking havoc on Earth, but also delivering life-related materials like water, carbon and oxygen.

Of the 26 images of debris disks obtained by the Gemini Planet Imager (GPI), 25 had "holes" around the central star that likely were created by planets sweeping up rocks and dust. Seven of the 26 were previously unknown; earlier images of the other 19 were not as sharp as those from GPI and often didn't have the resolution to detect an inner hole. The survey doubles the number of debris disks imaged at such high resolution.

"One of the things we found is that these so-called disks are really rings with inner clearings," said Esposito, who is also a researcher at the SETI Institute in Mountain View, California. "GPI had a clear view of the inner regions close to the star, whereas in the past, observations by the Hubble Space Telescope and older instruments from the ground couldn't see close enough to the star to see the hole around it."

The GPI incorporates a coronagraph that blocks the light from the star, allowing it to see as close as one astronomical unit (AU) from the star, or the distance of the Earth from our sun: 93 million miles.

The GPI targeted 104 stars that were unusually bright in infrared light, indicating they were surrounded by debris reflecting the light of the star or warmed by the star. The instrument recorded polarized near-infrared light scattered by small dust particles, about a thousandth of a millimeter (1 micron) in size, likely the result of collisions among larger rocks in a debris disk.

"There has been no systematic survey of young debris disks nearly this large, looking with the same instrument, using the same observing modes and methods," Esposito said. "We detected these 26 debris disks with very consistent data quality, where we can really compare the observations, something that is unique in terms of debris disk surveys."

The seven debris disks never before imaged in this manner were among 13 disks around stars moving together though the Milky Way, members of a group called the Scorpius-Centaurus stellar association, which is located between 100 and 140 parsecs from Earth, or some 400 light years.

"It is like the perfect fishing spot; our success rate was much greater than anything else we have ever done," said Paul Kalas, a UC Berkeley adjunct professor of astronomy who is second author of the paper. Because all seven are around stars that were born in the same region at roughly the same time, "that group itself is a mini-laboratory where we can compare and contrast the architectures of many planetary nurseries developing simultaneously under a range of conditions, something that we really didn't have before," Esposito added.

Of the 104 stars observed, 75 had no disk of a size or density that GPI could detect, though they may well be surrounded by debris left over from planet formation. Three other stars were observed to host disks belonging to the earlier "protoplanetary" phase of evolution.

What did our solar system look like in its infancy?

The extent of the debris disks varied widely, but most ranged between 20 and 100 AU. These were around stars that ranged in age from tens of millions of years to a few hundred million years, a very dynamic period for the evolution of planets. Most were larger and brighter than the sun.

The one star, HD 156623, that did not have a hole in the center of the debris disk was one of the youngest in the group, which fits with theories of how planets form. Initially, the protoplanetary disk should be relatively uniform, but as the system ages, planets form and sweep out the inner part of the disk.

"When we look at younger circumstellar disks, like protoplanetary disks that are in an earlier phase of evolution, when planets are forming, or before planets have started to form, there is a lot of gas and dust in the areas where we find these holes in the older debris disks," Esposito said. "Something has removed that material over time, and one of the ways you can do that is with planets."

Because polarized light from debris disks can theoretically tell astronomers the composition of the dust, Esposito is hoping to refine models to predict the composition -- in particular, to detect water, which is thought to be a condition for life.

Studies like these could help answer a lingering question about our own solar system, Kalas said.

"If you dial back the clock for our own solar system by 4.5 billion years, which one of these disks were we? Were we a narrow ring, or were we a fuzzy blob?" he said. "It would be great to know what we looked like back then to understand our own origins. That is the great unanswered question."