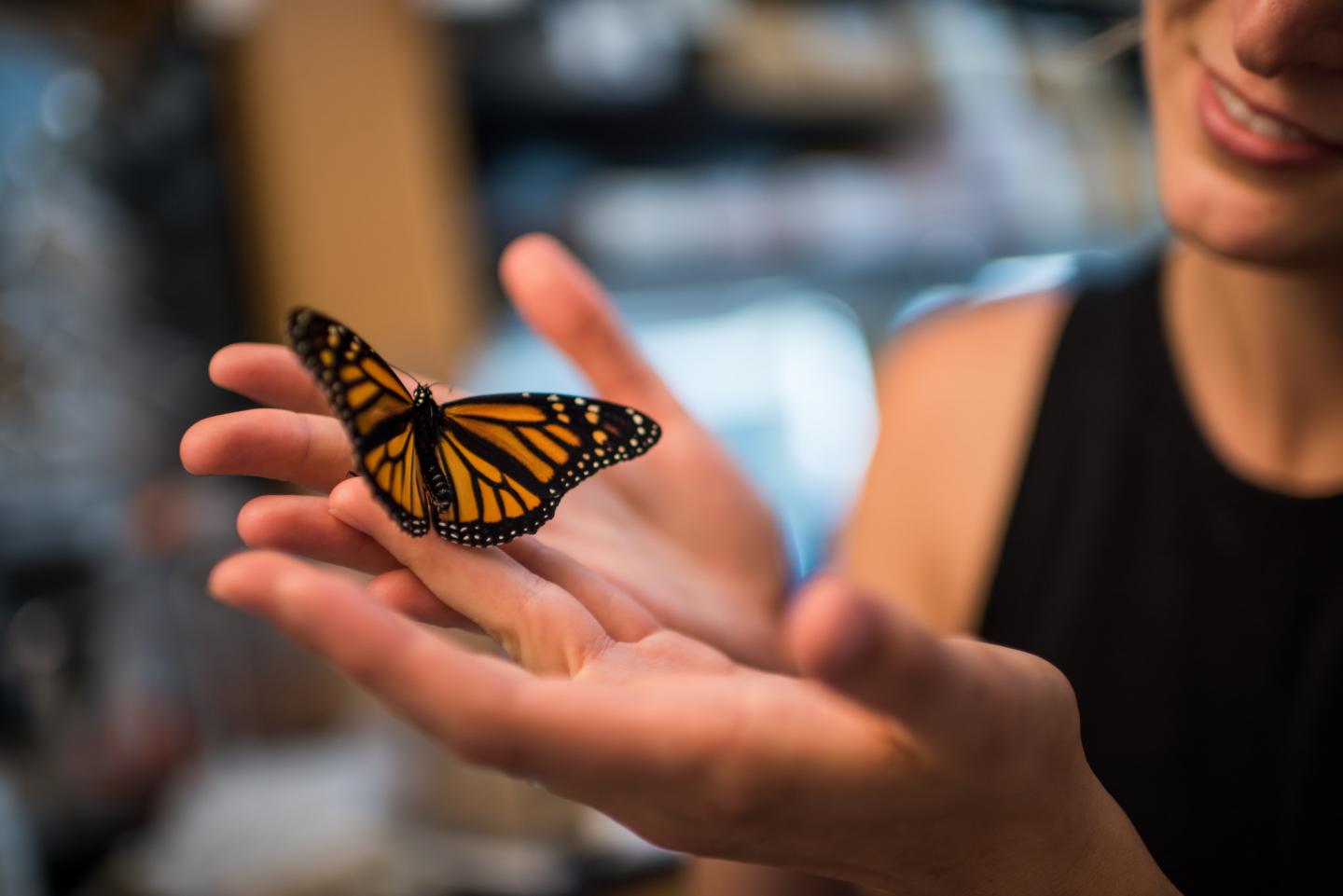 IMAGE: This is researcher Leslie Decker with a monarch butterfly in a University of Michigan laboratory.

Milkweed leaves contain bitter toxins that help monarchs ward off predators and parasites, and the plant is the sole food of monarch caterpillars. In a multi-year experiment at the U-M Biological Station, researchers grew four milkweed species with varying levels of those protective compounds, which are called cardenolides.

Half the plants were grown under normal carbon dioxide levels, and half of them were bathed, from dawn to dusk, in nearly twice that amount. Then the plants were fed to hundreds of monarch caterpillars.

The study showed that the most protective of the four milkweed species lost its medicinal properties when grown under elevated CO2, resulting in a steep decline in the monarch's ability to tolerate a common parasite, as well as a lifespan reduction of one week.

The study looked solely at how elevated carbon dioxide levels alter plant chemistry and how those changes, in turn, affect interactions between monarchs and their parasites. It did not examine the climate-altering effects of the heat-trapping gas emitted when fossil fuels are burned.

"We discovered a previously unrecognized, indirect mechanism by which ongoing environmental change--in this case, rising levels of atmospheric CO2--can act on disease in monarch butterflies," said Leslie Decker, first author of the study, which is scheduled for publication July 10 in the journal Ecology Letters.

"Our results emphasize that global environmental change may influence parasite-host interactions through changes in the medicinal properties of plants," said Decker, who conducted the research for her doctoral dissertation in the U-M Department of Ecology and Evolutionary Biology. She is now a postdoctoral researcher at Stanford University.

U-M ecologist Mark Hunter, Decker's dissertation adviser and co-author of the Ecology Letters paper, said findings of the monarch study have broad implications. Many animals, including humans, use chemicals in the environment to help them control parasites and diseases. Aspirin, digitalis, Taxol and many other drugs originally came from plants.

"If elevated carbon dioxide reduces the concentration of medicines in plants that monarchs use, it could be changing the concentration of drugs for all animals that self-medicate, including humans," said Hunter, who has studied monarchs at the U-M Biological Station, at the northern tip of Michigan's Lower Peninsula, for more than a decade.

Earlier work in Hunter's lab had shown that some species of milkweed produce lower cardenolide levels when grown under elevated carbon dioxide. That finding caught the attention of Decker, who with Hunter designed a follow-up study to look at the potential impact of rising CO2 on the disease susceptibility of monarchs in the future.

They created an experimental system that allowed them to manipulate and measure all the key links in the chain: carbon dioxide levels, toxin concentrations in milkweed leaves, infection by parasites, and monarch susceptibility to those parasites. The fieldwork was conducted in 2014 and 2015.

Inside 40 growth chambers on a hilltop at the Biological Station, they exposed milkweed plants to two different carbon dioxide levels. Twenty chambers were maintained at current global CO2 concentrations of around 400 parts per million, and 20 chambers received 760 ppm of CO2, a level that could be reached well before the end of the century if the burning of fossil fuels continues unabated.

Three-day-old caterpillars were also infected with carefully controlled doses of a common monarch parasite that is distantly related to the malaria pathogen. Ophryocystis elektroscirrha is a protozoan that shortens adult monarch lifespan, impedes its ability to fly and reduces the number of offspring it produces.

Over about two weeks' time, the infected caterpillars grew to a length of about 2 inches, with striking yellow, white and black bands. Then they pupated inside a hard-shelled chrysalis for about 10 days before emerging as orange-and-black butterflies.

At their Biological Station lab, Decker and Hunter raised hundreds of adult monarchs. The lifespan of each individual--in Michigan, monarch butterflies typically live for about a month--was recorded, and the number of parasitic spores on each carcass was counted.

Piecing together all this data, the researchers were able to determine how changes in atmospheric carbon dioxide levels altered toxin concentrations in the four milkweed species and, in turn, how exposure to those plants affected the monarch's lifespan and disease susceptibility.

The largest declines in parasite tolerance and butterfly lifespan occurred in monarchs that fed on A. curassavica, a milkweed species in which cardenolide production declined by nearly 25 percent when grown under elevated CO2.

"We've been able to show that a medicinal milkweed species loses its protective abilities under elevated carbon dioxide," Decker said. "Our results suggest that rising CO2 will reduce the tolerance of monarch butterflies to their common parasite and will increase parasite virulence."

In recent years, monarch populations have been declining rapidly. Most discussions of the monarch butterfly's plight focus on habitat loss: logging of trees in the Mexican forest where monarchs spend the winter, as well as the loss of wild milkweed plants that sustain them during their annual migration across North America.

"Habitat loss, problems during migration and climate change all contribute to monarch declines," Hunter said. "Unfortunately, our results add to that list and suggest that parasite-infected monarchs will become steadily sicker if atmospheric concentrations of CO2 continue to rise."