An international team of researchers has documented a remarkable example of natural selection in a tropical butterfly species that fought back - genetically speaking - against a highly invasive, male-killing bacteria.

Within 10 generations that spanned less than a year, the proportion of males of the Hypolimnas bolina butterfly on the South Pacific island of Savaii jumped from a meager 1 percent of the population to about 39 percent. The researchers considered this a stunning comeback and credited it to the rise of a suppressor gene that holds in check the Wolbachia bacteria, which is passed down from the mother and selectively kills males before they have a chance to hatch. 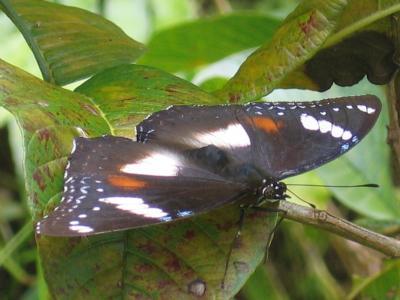 Shown is a female Hypolimnas bolina, also called the Blue Moon or Great Eggfly butterfly. The proportion of females in some populations of H. bolina in the South Pacific reached 99 percent as a result of infection by a bacteria that kills males before they hatch. However, researchers recently witnessed a remarkable comeback of male butterflies on some islands thanks to the rise of a suppressor gene. Credit: Sylvain Charlat

"To my knowledge, this is the fastest evolutionary change that has ever been observed," said Sylvain Charlat, lead author of the study and a post-doctoral researcher with joint appointments at the University of California, Berkeley, and University College London. "This study shows that when a population experiences very intense selective pressures, such as an extremely skewed sex ratio, evolution can happen very fast."

The researchers' findings are described in the July 13 issue of the journal Science.

Charlat pointed out that, unlike mutations that govern such traits as wing color or antennae length, a genetic change that affects the sex ratio of a population has a very wide impact on the biology of the species.

It is not yet clear whether the suppressor gene emerged from a chance mutation from within the local population, or if it was introduced by migratory Southeast Asian butterflies in which the mutation had already been established.

Charlat worked with Gregory Hurst, a reader in evolutionary genetics at University College London and senior author of the paper. Descriptions of all-female broods of H. bolina date back to the 1920s, but it wasn't until 2002 that Hurst and colleagues first identified Wolbachia bacteria as the culprit behind the distorted sex ratio.

"We usually think of natural selection as acting slowly, over hundreds or thousands of years," said Hurst. "But the example in this study happened in a blink of the eye, in terms of evolutionary time, and is a remarkable thing to get to observe."

The researchers noted that bacteria that selectively kill male offspring are found among a range of arthropods, so what was seen in this study may not be unusual, despite the fact that it has never before been described in the scientific literature. Previous research has revealed some of the extraordinary ways in which insects adapt to the pressures inherent when nearly all its members are of one gender.

Notably, Charlat and Hurst reported in an earlier study that, thanks to Wolbachia, when males of H. bolina, commonly known as the Blue Moon or Great Eggfly butterfly, become a rare commodity, the number of mating sessions for both males and females jumps, possibly as an attempt to sustain the population despite the odds.

Charlat added that the relationship between Wolbachia and the Blue Moon butterfly illustrates the so-called Red Queen Principle, an evolutionary term named after a scene in Lewis Carroll's famous book, "Through the Looking-Glass," in which the characters Alice and the Red Queen run faster and faster at the top of a hill, only to find that they remain in the same place.

"In essence, organisms must evolve or change to stay in the same place, whether it's a predator-prey relationship, or a parasite-host interaction," said Charlat. "In the case of H. bolina, we're witnessing an evolutionary arms race between the parasite and the host. This strengthens the view that parasites can be major drivers in evolution."

The researchers focused on the Samoan islands of Upolu and Savaii, where in 2001, males of the Blue Moon butterfly made up only 1 percent of the population. In 2006, the researchers embarked on a new survey of the butterfly after an increase in reports of male-sightings at Upolu.

They found that males that year made up about 41 percent of the Blue Moon butterfly population in Upolu. They hatched eggs from 14 females in the lab and confirmed that the male offspring from this group were surviving with sex ratios near parity. For Savaii, the population was initially 99 percent female at the beginning of 2006. By the end of the year, researchers found that males made up 39 percent of the 54 butterflies collected.

The researchers tested for the continued presence of Wolbachia in the butterflies. By mating infected females with males from a different island that did not have the suppressor gene, they also confirmed that the bacteria were still effective at killing male embryos. The male-killing ability of the bacteria emerged again after three generations. Thus, they could rule out a change in the bacteria as an explanation for the resurgence of the males in the butterfly populations studied.

The field work for this study was based out of the UC Berkeley Richard B. Gump South Pacific Research Station on the island of Moorea in French Polynesia. The Gump station is part of the Moorea Coral Reef Long Term Ecological Research Site, one of 26 sites funded by the National Science Foundation to study long-term ecological phenomena.

The Gump Research Station is managed through UC Berkeley's Office of the Vice Chancellor for Research. George Roderick, UC Berkeley professor of environmental science, policy and management and curator of the Essig Museum of Entomology, is a former director of the station, and Neil Davies is the station's executive director and research scientist. Both Roderick and Davies are co-authors of this study.