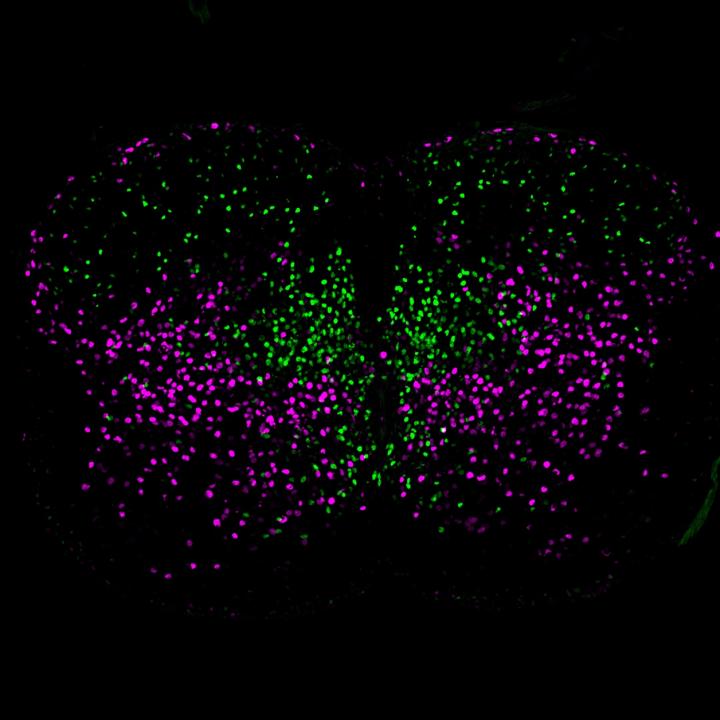 IMAGE: Researchers discovered a genetic marker that differed between spinal cord neurons that only had short connections (green) and those that had more long-range connections (purple).

LA JOLLA--(April 22, 2021) Spinal cord nerve cells branching through the body resemble trees with limbs fanning out in every direction. But this image can also be used to tell the story of how these neurons, their jobs becoming more specialized over time, arose through developmental and evolutionary history. Salk researchers have, for the first time, traced the development of spinal cord neurons using genetic signatures and revealed how different subtypes of the cells may have evolved and ultimately function to regulate our body movements.

The findings, published in the journal Science on April 23, 2021, offer researchers new ways of classifying and tagging subsets of spinal cord cells for further study, using genetic markers that differentiate branches of the cells' family tree.

"A study like this provides the first molecular handles for scientists to go in and study the function of spinal cord neurons in a much more precise way than they ever have before," says senior author of the study Samuel Pfaff, Salk Professor and the Benjamin H. Lewis Chair. "This also has implications for treating spinal cord injuries."

Spinal neurons are responsible for transmitting messages between the spinal cord and the rest of the body. Researchers studying spinal neurons have typically classified the cells into "cardinal classes," which describe where in the spinal cord each type of neuron first appears during fetal development. But, in an adult, neurons within any one cardinal class have varied functions and molecular characteristics. Studying small subsets of these cells to tease apart their diversity has been difficult. However, understanding these subset distinctions is crucial to helping researchers understand how the spinal cord neurons control movements and what goes awry in neurogenerative diseases or spinal cord injury.

"It's been known for a long time that the cardinal classes, as useful as they are, are incomplete in describing the diversity of neurons in the spinal cord," says Peter Osseward, a graduate student in the Pfaff lab and co-first author of the new paper, along with former graduate student Marito Hayashi, now a postdoctoral fellow at Harvard University.

Pfaff, Osseward and Hayashi turned to single-cell RNA sequencing technologies to analyze differences in what genes were being activated in almost 7,000 different spinal neurons from mice. They used this data to group cells into closely related clusters in the same way that scientists might group related organisms into a family tree.

The first major gene expression pattern they saw divided spinal neurons into two branches: sensory-related neurons (which carry information about the environment through the spinal cord) and motor-related neurons (which carry motor commands through the spinal cord). This suggests that, in an ancient organism, one of the first steps in spinal cord evolution may have been a division of labor of spinal neurons into motor versus sensory roles, Pfaff says.

When the team analyzed the next branches in the family tree, they found that the sensory-related neurons then split into excitatory and inhibitory neurons--a division that describes how the neuron sends information. But when the researchers looked at motor-related neurons, they found a more surprising division: the cells clumped into two distinct groups based on a new genetic marker. When the team stained cells belonging to each group in the spinal cord, it became clear that the markers differentiated neurons based on whether they had long-range or short-range connections in the body. Further experiments revealed that the genetic patterns specific to long-range and short-range properties were common across all the cardinal classes tested.

"The assumption in the field was that the genetic rules of specifying long-range versus short-range neurons would be specific to each cardinal class," say Osseward and Hayashi. "So it was really interesting to see that it actually transcended cardinal class."

The observation was more than just interesting--it turned out to be useful as well. Previously, it might have taken many different genetic tags to narrow in on one particular neuron type that a researcher wanted to study. Using this many markers is technically challenging and largely prevented researchers from studying just one subtype of spinal cord neuron at a time.

With the new rules, just two tags--a previously known marker for cardinal class and the newly discovered genetic marker for long-range or short-range properties--can be used to flag very specific populations of neurons. This is useful, for instance, in studying which groups of neurons are affected by a spinal cord injury or neurodegenerative disease and, eventually, how to regrow those particular cells.

The evolutionary origin of the spinal neuron family tree studied in the new paper is likely very ancient because the genetic markers they discovered are conserved across many species, the researchers say. So, although they didn't study spinal neurons from animals other than mice, they predict that the same genetic patterns would be seen in most living animals with spinal cords.

"This is primordial stuff, relevant for everything from amphibians to humans," says Pfaff. "And in the context of evolution, these genetic patterns tell us what kind of neurons might have been found in some of the very earliest organisms."