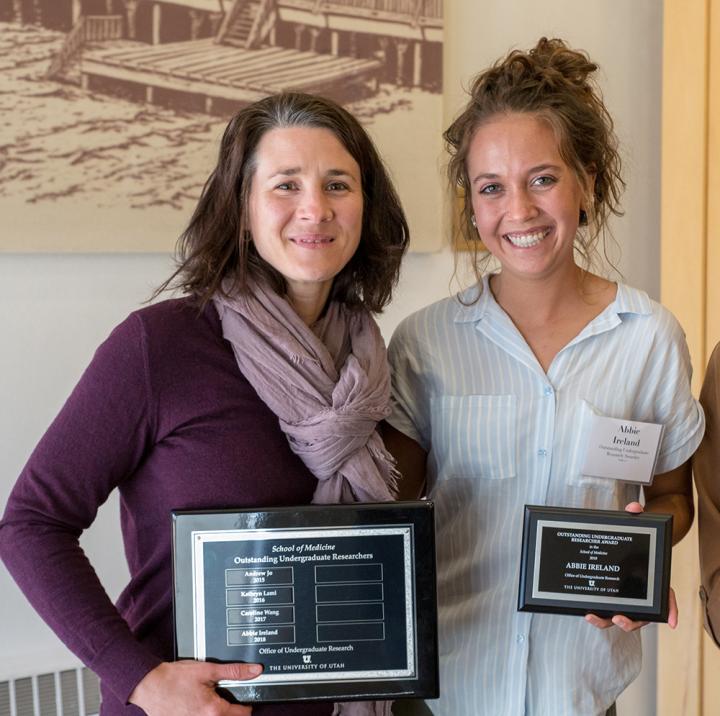 IMAGE: Today in the journal Cancer Cell, scientists outline new findings about the origins of these lung cancer subtypes, paving the way for a new foundation to study this disease.

Lung cancers account for approximately 25 percent of all cancer deaths. Even among those who do not smoke, 1 in 15 men and 1 in 17 women are expected to develop lung cancer in their lifetime, according to the American Cancer Society. Lung cancer has confounded scientists who strive to develop better therapies for this aggressive and deadly disease.

Trudy Oliver, PhD, a lung cancer researcher at Huntsman Cancer Institute (HCI) and associate professor of oncological sciences at the University of Utah (U of U), is working to improve our ability to fight this disease. Prior work in her lab helped create a mouse model of small cell lung cancer, providing researchers with a sophisticated tool to better understand how this disease progresses and to analyze potential treatment approaches. According to Oliver, "Small cell lung cancer has historically been treated as a single disease, which has been an unsuccessful approach for most patients. Thanks to rapid advances in the field, we now understand that each type of small cell lung cancer has specific traits--including traits that may help us understand better ways to tailor treatment for patients."

U of U graduate student Abbie Ireland, a member of Oliver's team and first author on the study, developed a new assay that allowed the team to follow single cells from tumor samples and observe how they change over time. Ireland and colleagues found that the major subtypes of small cell lung cancer are not so discretely different after all. Rather than thinking of them as distinct diseases, the team found that one tumor subtype can evolve to become a different subtype. And further, a tumor may have cells representing multiple subtypes at any given time.

"Human development involves multiple stages--infancy, adolescence, and adulthood. While we are humans at each of those stages, we have unique characteristics and behaviors at each stage," says Oliver. "Our data suggest that small cell lung cancer is the same way, that it changes at different stages and displays unique characteristics and behaviors in each stage." Oliver's team believes this means small cell lung cancer will have unique vulnerabilities as it evolves. To treat these sophisticated tumors may require a therapeutic approach that acknowledges the tumors are a "moving target" and that treatments need to evolve over time with the tumor. It is also possible these cancers will require combinations of drugs that can target multiple subtypes of the tumor at the same time.

This finding may also aid in understanding other cancers known to have subtypes, such as breast cancer or glioblastoma. The team speculates that subtypes in other cancers may also represent stages of tumor evolution.

Through a collaboration with HCI lung cancer physicians, Oliver was able to access samples of tumors donated by 21 patients who had surgeries at HCI. Tumor samples of small cell lung cancer are very difficult to obtain, and this opportunity to study tumor traits from tumors donated by patients was important to advance insights into this disease. Ireland and her colleagues analyzed tumors for markers of small cell lung cancer subtypes and found that many tumors had markers of more than one subtype, consistent with their ability to change subtype or evolve. Additionally, through a collaboration at Washington University in St. Louis, the team studied one human tumor at the single-cell level using a relatively new, advanced technology called single-cell RNA sequencing.

Oliver's group further showed that a gene called MYC, which is known to promote tumor growth in many cancers, appears to be responsible for driving the evolution of small cell lung tumors.

"Together, the results of these human tissue analyses revealed that small cell lung cancer tumors indeed harbor multiple subtypes," says Oliver. Oliver posits this may explain why so many therapies have failed for small cell lung cancer in clinical trials. Since the tumor is naturally evolving, there may need to be multiple, simultaneous treatments in order to be effective.

Oliver's team now plans to investigate how the evolution of tumors may affect response to various therapies.