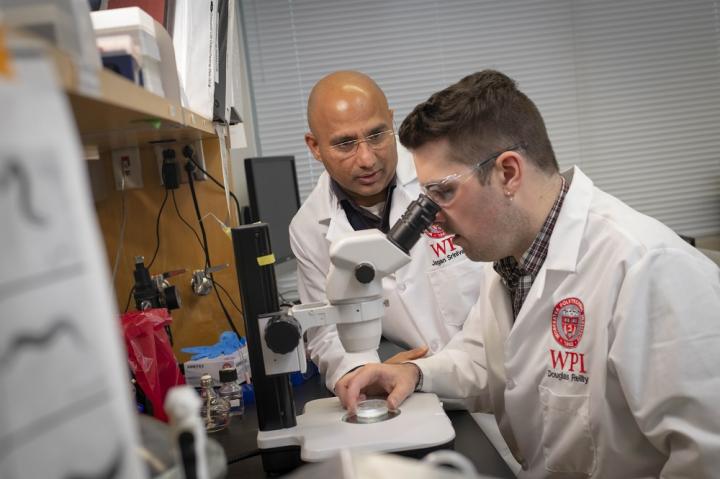 Worcester, Mass. - January 14, 2020 - Researchers at Worcester Polytechnic Institute (WPI) have developed a tool to identify molecular receptors in worms that are involved in sensing pheromones related to mating, an advance that could speed up neuroscience research into pheromones by eliminating months of work.

Associate professor of biology and biotechnology Jagan Srinivasan, doctoral candidate in biology Douglas K. Reilly, and researchers at Cornell University published their findings in Organic & Biomolecular Chemistry, a journal of the Royal Society of Chemistry in the United Kingdom.

Pheromones are chemicals produced by animals that send signals to other animals and trigger social responses, such as mating. Srinivasan and Reilly study pheromones in microscopic worms known as Caenorhabditis elegans, or C. elegans, to better understand how the sense of smell works. Their research could have implications for human research because C. elegans has a nervous system that mimics the basic mechanisms of smell in humans, and loss of the sense of smell is associated with neurodegenerative disorders such as Alzheimer's disease.

Srinivasan and Reilly developed a process that more quickly isolates pheromone receptors in C. elegans. Receptors are specialized proteins that act as docking stations for molecules. When worms are exposed to pheromones, the pheromones latch onto the molecular receptors in the worms.

Isolating a specific molecular receptor traditionally has been a long, laborious process because the worms possess more than 1,000 molecular receptors. Srinivasan described the traditional process--which takes three or four months--as hunting for a needle in a haystack. The new method he and Reilly developed takes about a month.

"Here we are saving months of work, we're streamlining the process, and we're getting a targeted approach," Srinivasan said.

In their study, Srinivasan and Reilly attached a chemical known as an alkyne to an ascaroside, a pheromone produced by C. elegans to attract male worms for mating.

"We wanted to find a way that we could take a pheromone and link it to a probe, yet it would still be biologically active so a male would sense it and respond to it with the right receptor," Reilly said. "Then we wouldn't have to screen 1,200 receptors that are in the genome."

For this study, the researchers focused on the process rather than the resulting receptor, which they said could be a subject of further research. Their probe methods could also be applied to other pheromones and to other research organisms, such as flies, to better understand how receptors function, they said.

"We're looking at this mate attractant pheromone, but there are people looking at pheromones involved in foraging for food and other actions," Reilly said. "For those, we can start to ask what receptors are sensing the pheromone we're using."

In addition, Srinivasan said, "Applications of this new technology could help identify receptors in parasitic nematodes that cause damage to agricultural crops."