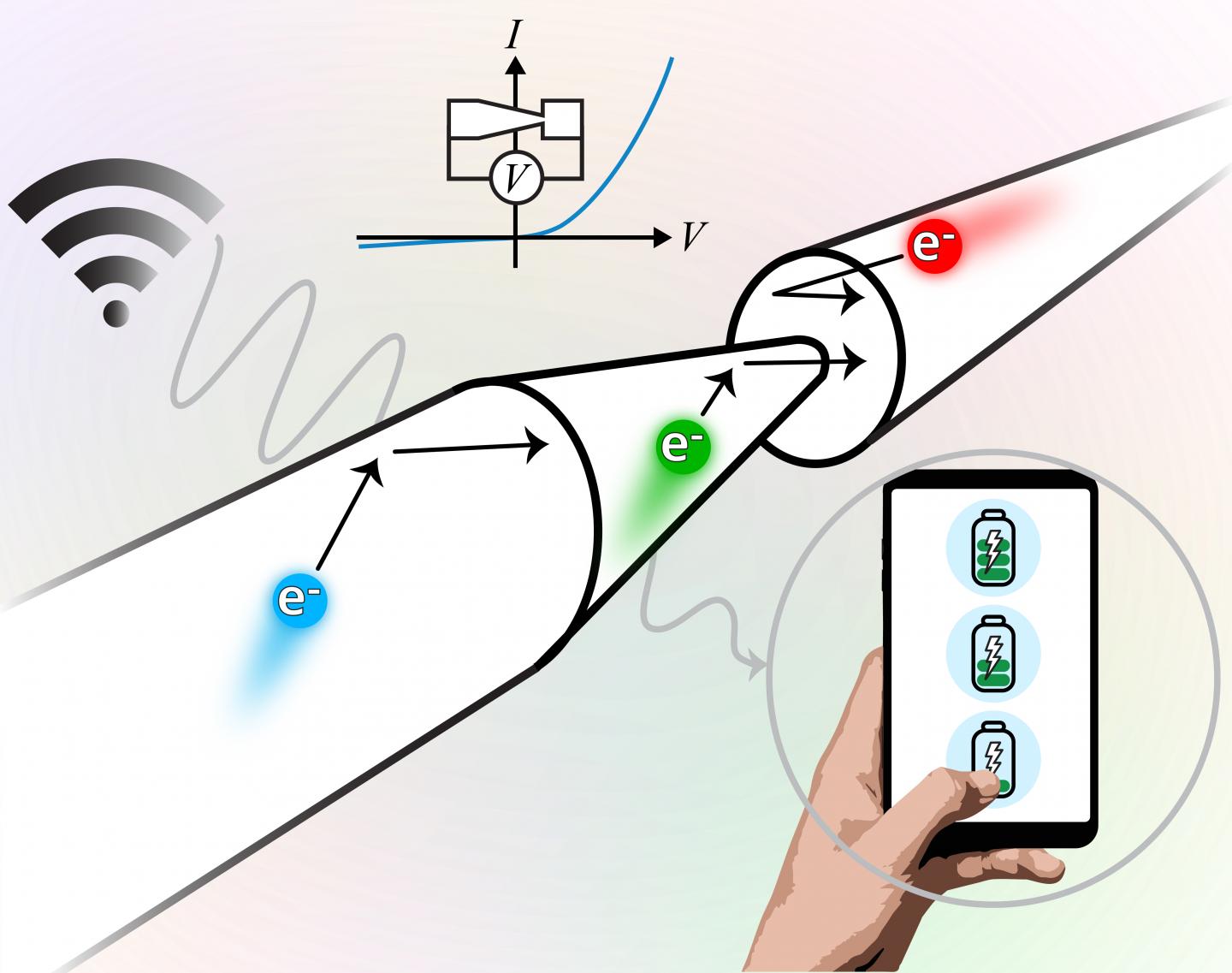 IMAGE: In an ultra-small geometry under the right conditions, electrons can be treated like particles bouncing off a wall. If the electrons are contained in a wire and symmetry is broken,...

Researchers at the University of North Carolina at Chapel Hill made a one-way street for electrons that may unlock the ability for devices to process ultra-high-speed wireless data and simultaneously harvest energy for power. The researchers did this by shaping silicon on a microscopic scale to create a funnel, or "ratchet," for electrons.

This method overcomes the speed limitations of prior technologies by removing interfaces that tend to slow down devices."This work is exciting because it could enable a future where things like low-power smartwatches are wirelessly charged from the data they already receive without ever needing to a leave a person's wrist," said James Custer Jr., a doctoral student in UNC-Chapel Hill's College of Arts & Sciences.

The findings were published April 10 in the journal Science. Custer is lead author. He worked with collaborators at Duke and Vanderbilt universities.

Electrons carry electrical current, and they typically don't care about the shape of the wire in which the current flows. Yet, when things get very small, shape begins to matter. The funnels here are ultra-small, more than a million times smaller than a typical electrical wire. As a result, the electrons inside behave like billiard balls -- bouncing freely off of surfaces. The asymmetric funnel shape then causes the electrons to bounce preferentially in one direction. In effect, the electrons are forced to follow a one-way street.

Under a direct current (DC) voltage, the funnel makes it easier for current to flow in a forward direction than reverse direction, creating an electrical diode. When alternating current (AC) is applied, the structure still only allows current to flow in one direction, behaving as a ratchet and causing electrons to build up on one side. This process is like a socket wrench, which ratchets force to produce physical motion in only one direction.

The work has shown that these electron ratchets create "geometric diodes" that operate at room temperature and may unlock unprecedented abilities in the illusive terahertz regime.

"Electrical diodes are a basic component of electronics, and our results suggest there could be a completely different paradigm for the design of diodes that operate at very high frequencies," said James Cahoon, an associate professor of chemistry. Cahoon is corresponding author and led the study's research group. "The results are possible because we grow the structures from the bottom up, using a synthetic process that yields geometrically precise, single-crystalline materials."

The electron ratchets are created by a process previously developed in the Cahoon group called ENGRAVE, which stands for "Encoded Nanowire Growth and Appearance through VLS and Etching." ENGRAVE uses a vapor-liquid-solid process to chemically grow single-crystal cylinders of silicon, called nanowires, with precisely defined geometry.

"A lot of the work in this field has previously been done with expensive materials at cryogenic temperatures, but our work highlights that geometric diodes made with relatively cheap silicon can function at room temperature, which even surprised us at first," Custer said. "We hope our results spark a surge of interest in geometric diodes."

Diodes are the backbone for all technology; they allow computers to process data by encoding signals as 1s and 0s. Traditionally, diodes require interfaces between materials, such as between n-type and p-type semiconductors or between semiconductors and metals. By contrast, geometric diodes are made of a single material and simply use shape to direct charges preferentially in one direction.