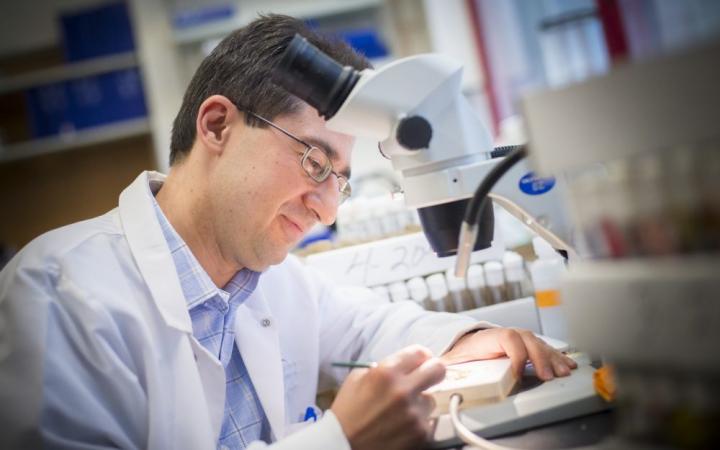 IMAGE: Fabio Demontis, Ph.D., of the St. Jude Department of Developmental Neurobiology is researching how skeletal muscle communicates energy needs to the brain.

The brain determines when it is time to feed - but how does it know? Findings from St. Jude Children's Research Hospital provide new understanding of how the brain orchestrates this process. Skeletal muscle, like other tissues, communicates with the brain to convey information about nutritional status. The researchers showed that manipulating this mechanism influences food seeking and feeding in fruit flies. This work was published online today in Genes & Development.

Tissues like adipose, intestine and liver signal to the brain through hormones that regulate feeding behavior. Skeletal muscle makes up 40% of the human body and has high energy and nutrient demands. However, until now scientists did not appreciate how skeletal muscle can similarly communicate with the brain through signaling factors called myokines.

"Until now, the brain has been the least-studied target of myokine activity," said corresponding author Fabio Demontis, Ph.D., of the St. Jude Department of Developmental Neurobiology. "There are many myokines that act on other tissues, but their roles in signaling to the brain have been largely unexplored."

The molecular key to muscle-brain communication

To better understand how skeletal muscle communicates with the brain regarding feeding behavior, the researchers looked at the myokine Dpp in fruit flies. Dpp is the fruit fly equivalent of the BMP2 and BMP4 signaling factors in humans.

A link between Dpp, dopamine and feeding initiation

The researchers also found that muscle-derived Dpp regulates the levels of brain tyrosine hydroxylase, an enzyme key to the synthesis of the neurotransmitter dopamine. Among a number of other roles, dopamine has previously been linked to feeding behavior.

The researchers found that lowering Dpp levels in muscle led to higher levels of dopamine in the brain and increased feeding. Conversely flies with higher Dpp levels in muscle had lower levels of brain dopamine and were less likely to seek food. The researchers also found that modulation of dopamine synthesis in the brain is key to the regulation of feeding by muscle-derived Dpp.

"Dpp is doing more than anyone thought it was. Beyond feeding behavior, endocrine Dpp signaling could be regulating a number of other tissue and systemic functions, including disease processes that involve dopaminergic neurons, " Demontis said. "And because Dpp has comparable proteins in humans, it may be relevant to feeding behavior and metabolic diseases in higher organisms."