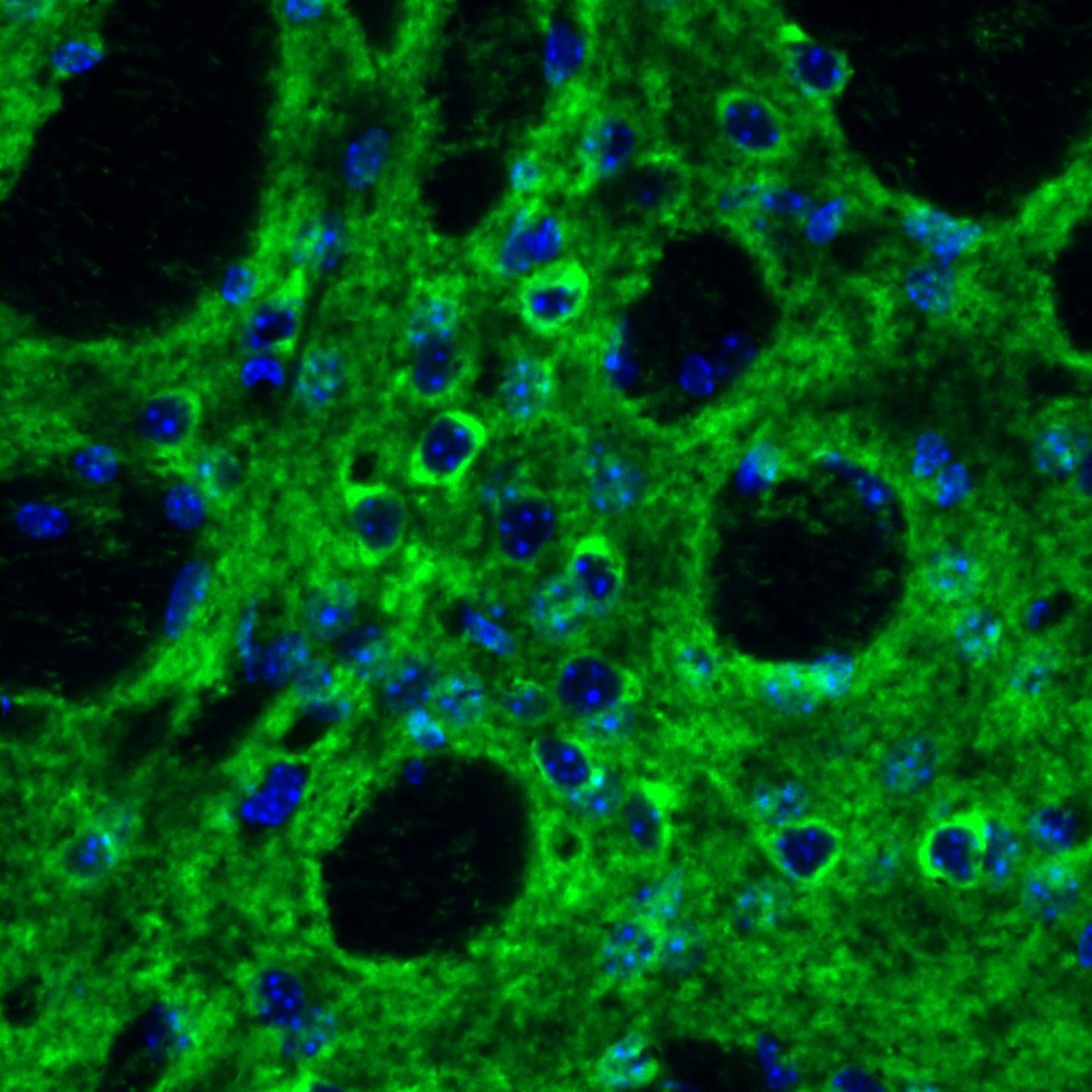 IMAGE: In this figure from a prior study, green staining highlights Stat3 in the striatum region of the brain. Stat3 is a major transducer of IL-6 signaling.

More than a decade before people with Huntington's disease show symptoms, they can exhibit abnormally high levels of an immune-system molecule called interleukin-6 (IL-6), which has led many researchers to suspect IL-6 of promoting the eventual neurological devastation associated with the genetic condition. A new investigation by MIT neuroscientists shows that the story likely isn't so simple. In a new study they found that Huntington's model mice bred to lack IL-6 showed exacerbated symptoms compared to HD mice that still had it.

"If one looks back in the literature of the Huntington's disease field many people have postulated that reductions to IL-6 would be therapeutic in HD," said Myriam Heiman, associate professor in MIT's Department of Brain and Cognitive Sciences and a member of The Picower Institute for Learning and Memory and the Broad Institute of MIT and Harvard. She is senior author of the paper in Molecular Neurodegeneration. Former postdoc Mary Wertz is the lead author.

To test the hypothesis that knocking out IL-6 would help HD mice, the researchers crossbred mice engineered to model HD with mice engineered to lack IL-6. They then compared the performance of offspring on a variety of standard movement tasks to that of healthy mice, mice just lacking IL-6, and mice just modeling HD but still having IL-6. The HD mice lacking IL-6 performed significantly worse than the other mouse lines, including the HD mice that still had IL-6.

The result was as surprise not only because of the record in prior studies, but also because in a paper published earlier this year, Wertz and Heiman conducted a sweeping analysis of genes that promoted neuron survival in Huntington's disease and some of the hits they turned up were ones that are associated with interleukin signaling.

Struck by the findings in the new study, the team sought to understand why they occurred. To do that, they measured gene expression in all the major cell types in the striatum, the brain region most affected in HD, by sequencing RNA in thousands of individual cells in each mouse line. When they looked at the differences in gene expression in neurons between the two HD mouse lines - the ones that had IL-6 and the ones that didn't - they saw that many genes important for synapses, the connections that link neurons into circuits, were significantly less expressed in the HD mice without IL-6.

"Perhaps this worsening of the phenotype is due to perturbation of those synaptic signaling pathways," Heiman said.

While the study shows there is definitely not a therapeutic benefit to completely knocking out IL-6, it may still be possible to find a level between overexpression and complete knockout that is therapeutic, Heiman said. It may also be possible that timing is crucial. For instance, in this study mice lacked IL-6 right from birth, but potentially intervening to modulate IL-6 levels is more beneficial at some stage of adulthood, she said. The lab plans to continue to pursue that investigation.

"What these results show us is that we really have to understand which parts of innate immune signaling are activated when and what the order of events is," she said.