Troy, N.Y. – Steel walls are no match for Tristan Lawry. The doctoral student at Rensselaer Polytechnic Institute has developed and demonstrated an innovative new system that uses ultrasound to simultaneously transmit large quantities of data and power wirelessly through thick metal walls, like the hulls of ships and submarines.

Lawry, a student in the Department of Electrical, Computer, and Systems Engineering at Rensselaer, is one of three finalists for the 2011 $30,000 Lemelson-MIT Rensselaer Student Prize. A public ceremony announcing this year's winner will be held at 7 p.m. on Wednesday, March 9 in the auditorium of the Rensselaer Center for Biotechnology and Interdisciplinary Studies.

Lawry's project is titled "A High-Performance System for Wireless Transmission of Power and Data Through Solid Metallic Enclosures," and his faculty adviser is Gary Saulnier, professor of electrical, computer, and systems engineering at Rensselaer.

In our increasingly tetherless world, wires have been all but replaced by more convenient wireless connections in homes and offices – everything from phones and accessing the Internet to keyboards and printers. In the area of defense, a progression from wired to wireless systems presents an opportunity to improve the safety of naval vessels. Presently, to install critical safety sensors on the exterior of ships and submarines, the U.S. Navy is forced to drill holes in the hull through which cables for data and power transmission are run. Each hole increases the risk of potentially serious issues, including leaks and structural failure. Additionally, installing these sensors on commissioned vessels requires the use of a drydock or cofferdam, which can take months and cost millions of dollars. 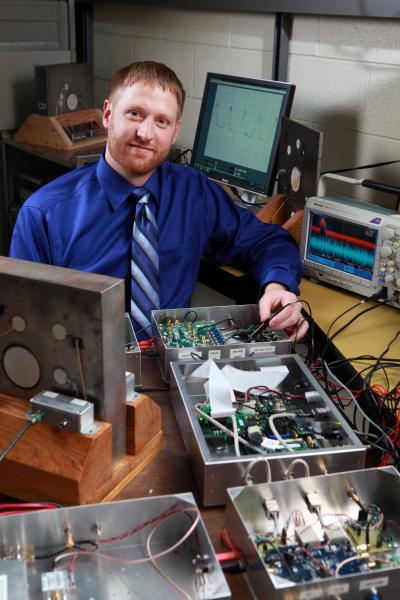 Steel walls are no match for Tristan Lawry. The doctoral student at Rensselaer Polytechnic Institute has developed and demonstrated an innovative new system that uses ultrasound to simultaneously transmit large quantities of data and power wirelessly through thick metal walls, like the hulls of ships and submarines.

With this new system, Lawry has demonstrated the simultaneous, continuous delivery of 50 watts of power and 12.4 megabytes per second (Mbps) of data through a 2.5-inch-thick solid steel block in real time. These results far surpass all known previously published systems capable of simultaneous data and power transmission through metal. With only minor modifications, Lawry said he's confident his design will have the capacity to support much higher power levels and data rates. His invention uses a powerful communication technology that allows the transmission system to adapt to non-ideal conditions and mechanical variations over time. This is critical for ensuring successful operation of the system in real-world conditions outside of a controlled laboratory environment.

Lawry's complex combination of electronic and acoustic hardware, signal generation and detection technology, and power generation and collection equipment shares many characteristics with a state-of-the-art communications system such as a cellular phone. Using the three main building blocks of electrical engineering – power, communications, and computing – Lawry has developed a system that can communicate through a thick metal wall without the need for a battery or any supplemental power source. This means sensors on the outer hull of submarines can be made to work with systems on the other side of the wall for many years without the need for human intervention.

In addition to the hulls of ships and submarines, Lawry said his wireless data and power system could benefit many other applications where it is necessary or advantageous to continually power and monitor sensor networks in isolated environments. For example, his system could be used to power and communicate with sensors in nuclear reactors, chemical processing equipment, oil drilling equipment and pipelines, armored vehicles, un-manned underwater deep-sea exploration vehicles, or even space shuttles and satellites.

When not in the lab, Lawry enjoys staying active by playing soccer, hockey, and an exciting round of paintball. At Rensselaer, the Shrewsbury, Vt., native has founded and organized a community outreach program with the Eta Kappa Nu honor society to deliver entertaining science and engineering presentations to local elementary and high school students. Lawry was recently married. His wife, Allison, has provided unwavering support and inspiration throughout his time as a student at Rensselaer. Lawry's mother, a kindergarten teacher back home in Vermont, and his twin older brothers are rooting for him to win the 2011 Lemelson-MIT Rensselaer Student Prize.