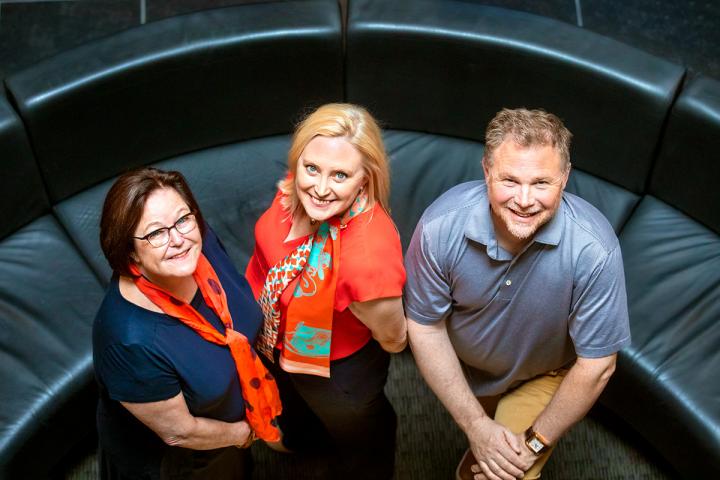 IMAGE: Children from food-insecure households were more likely to attend school on Fridays if they received weekend meals through the BackPack food-distribution program at their school, according to a new study...

CHAMPAIGN, Ill. -- Children living in food-insecure households are more likely to attend school on Fridays if they're participating in a food-distribution program that provides them with backpacks of meals for the weekend, researchers at the University of Illinois found in a new study.

Students participating in the BackPack food program missed one Friday on average during the school year, about the same rate as the 155 children in the comparison group, said Barbara H. Fiese, the first author of the study and the director of the U. of I.'s Family Resiliency Center.

The study included 444 students at 16 schools in east central Illinois. Of these students, 289 were participants in Feeding America's BackPack Program, a national initiative that provides children in food-insecure households with backpacks containing nutritious, easy-to-prepare meals to eat over the weekend.

Children in the program, who received their backpacks of weekend meals at school on Fridays, had fewer absences on Fridays than other school days.

BackPack students' rates of perfect attendance on Fridays were similar to those of students in the comparison group, at 26% and 27%, respectively.

"Given that children in the BackPack program were more likely to miss school than children in the comparison group, we consider this effect noteworthy for academic engagement. Even if these children attend just a few more days per school year, over time that may improve their academic progress," Fiese said.

"Thus, the simple act of distributing food on a Friday may have educational benefits for a particularly vulnerable group of children," she said.

Improved attendance as a result of participating in the food program may have spillover benefits for these children's classmates as well, since chronic absenteeism has been found to negatively affect classmates' academic performance too, the researchers wrote.

The participating elementary schools signed partnership agreements with the local food bank and appointed a staff member such as a principal, social worker or secretary to coordinate the BackPack program and select students from kindergarten to fifth grade to participate.

Eastern Illinois Foodbank provided a one-hour training session for the coordinators to teach them how to identify children from food-insecure households, based upon physical and behavioral indicators such as extreme thinness or students rushing the school lunch line.

Families of students at each school were mailed a six-item questionnaire that assessed whether they were food-insecure, based upon their using a food pantry or receiving Supplemental Nutrition Assistance Program benefits during the prior 30 days.

Of the parents who returned the survey, about 44% were employed and about 20% were unemployed but seeking work, according to the study.

Among households whose children were selected for the BackPack program, 72% were food insecure versus 50% of families on the wait list, the researchers found.

The rates of food insecurity among these families were more than double and triple the national and county rates, which were both around 19% when the study was conducted during the 2011-12 school year, the researchers noted.

When assessing students' families for food programs, it's important for school officials to look beyond any income-based criteria and recognize that families may be struggling with multiple demands and limited resources, the researchers wrote.

"Although food insecurity is associated with poverty and lack of economic resources, it is not equivalent to poverty, as some poor families are not food insecure and some food-insecure families may have incomes above the threshold to participate in some or all of the federal nutrition programs," Fiese said. "In some cases, food insecurity may be associated with being a single parent with a low-paying job, or with being a married couple who had a recent job loss and have multiple mouths to feed."