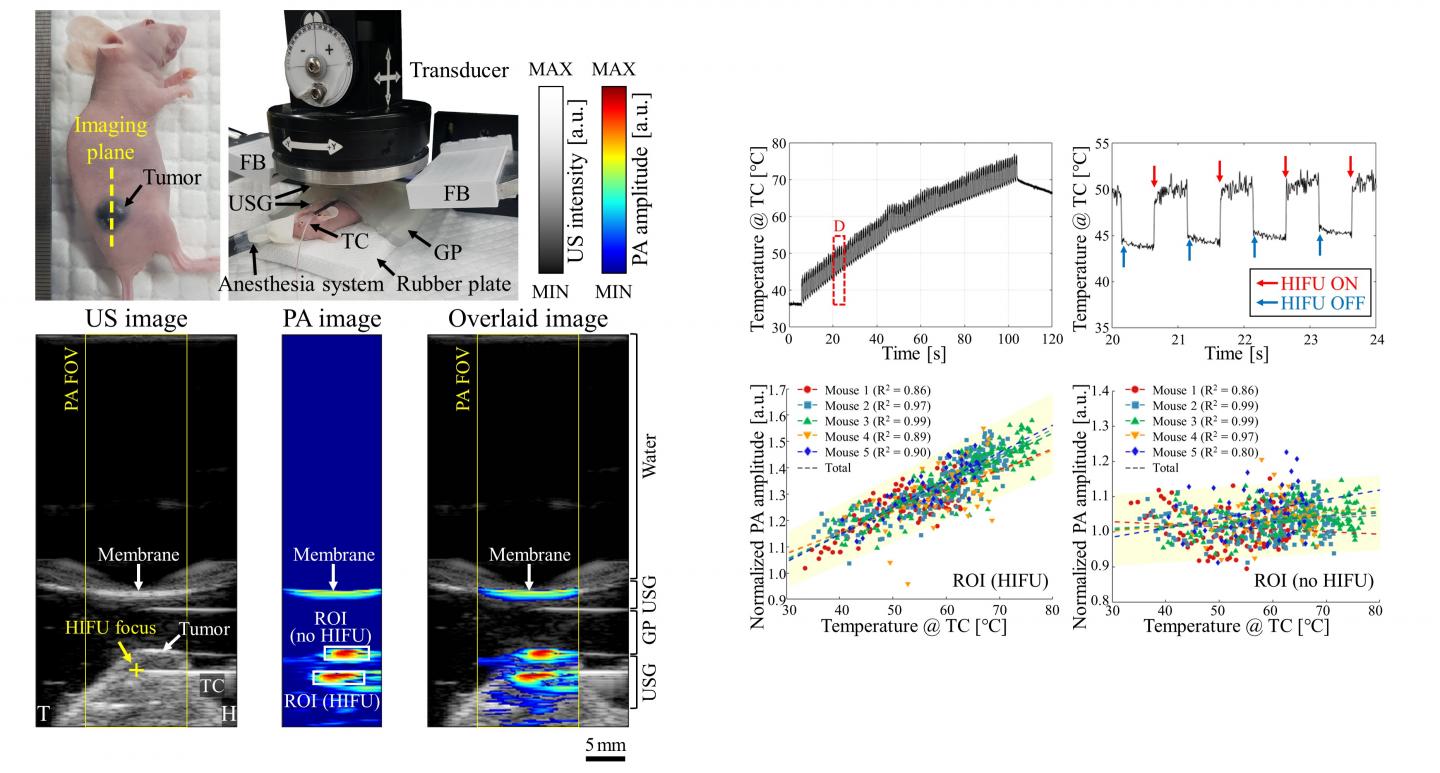 IMAGE: Real-time ultrasound and photoacoustic thermometry images acquired during the cancer treatment and the analysis results of photoacoustic signal increase depending on the temperature.

High Intensity Focused Ultrasound (HIFU) treatment is a non-invasive method that removes unhealthy tissues and tumors by delivering high intensity ultrasound waves from outside of the body to the lesion. It does only a minimal damage to the normal tissues around the lesion and allows fast recovery of a patient which is why this innovative treatment has been called as the "ultrasound of the next generation." Recently, a research team from Korea developed a photoacoustic (PA) thermometry system for HIFU treatment guidance, and demonstrated real-time monitoring of temperature increase at the tumor in living subjects during the HIFU treatment. With this new finding, further development for an exquisite HIFU treatment is anticipated.

Professor Chulhong Kim of the Department of Creative IT Engineering with his post-doctoral researcher Jeesu Kim and a PhD student Wonseok Choi suggested real-time PA thermometry system that was seamlessly integrated with the HIFU treatment system. This new system allows ultrasound imaging, PA imaging and PA thermometry simultaneously during the therapeutic HIFU wave being delivered.

Their research establishment was published in Transactions on Biomedical Engineering of IEEE (Institute of Electrical and Electronics Engineering) and selected as a feature article and the front cover of the issue.

HIFU treatment delivers intense ultrasound energy to the focal site to induce high temperature rise ranging from 65 to 100 degree Celsius. By this principle, HIFU is able to treat internal lesions without using a knife or needle, or even ionizing radiations.

Measuring the temperatures of normal tissue and lesion helps identify location and status of the lesion precisely during the HIFU treatment. It is also crucial in controlling the safety and accurately planning a treatment. In this aspect, medical imaging techniques such as MRI and ultrasound has been necessary to support the non-invasive treatment monitoring.

While there were several previous researches regarding the PA thermometry to monitor HIFU treatment process, none of them were able to image while HIFU is turned on, to provide two-dimensional monitoring, or to show the feasibility for clinical usage.

The research team demonstrated the PA thermometry by studying the relation between the intensity of the PA signal and the temperature using a tumor-bearing laboratory mouse. They successfully tested the feasibility of the real-time PA thermometry by verifying that there was a strong correlation between the PA signal strength and the temperature at the site of lesion that was treated with HIFU. Also, they were able to distinguish the location of lesion according to the level of optical absorption which was impossible with the conventional ultrasound imaging.

Professor Chulhong Kim who led the research said, "This new development of photoacoustic thermometry system allows temperature measurement during HIFU treatment in real time and we are now able to establish an efficient plan of a HIFU treatment. Moreover, it can be clinically used promptly because we only need to combine laser with the conventional HIFU treatment system that uses ultrasound imaging."