In Germany, the rising cost of heating has sparked a renovation boom. In order to lower energy costs, more and more homeowners are investing in insulation facades. But the typical insulation layers on the market have one drawback: they add bulk. The 20-centimeter-thick outer skin changes the building's visual appearance and can result in significant follow-up costs – with a need to fit new, deeper window sills and sometimes even roof extensions. Fraunhofer researchers are now developing films for a material that will insulate homes without much additional structural alteration: vacuum isolation panels, VIPs for short. The panels are only two centimeters thick and yet perform just as well as a classic 15-centimeter-thick insulation layer made from polyurethane foam. The inner workings of the VIPs are made mostly from pyrogenic silica. A high-tech film holds the material together and makes it air-tight.

Dr. Klaus Noller from the Fraunhofer Institute for Process Engineering and Packaging IVV in Freising and Prof. Gerhard Sextl from the Fraunhofer Institute for Silicate Research ISC in Würzburg have been involved with the development of VIPs since the very beginning. They now want to ready the panels for cost-effective mass production. "The key elements are the films: they dictate the quality, life span and price," acknowledges Noller. "The current production method is time-consuming and expensive: three of the five layers of plastic have to be coated with aluminum and stuck together. This requires seven production steps, which drives the price up." At present, these expensive VIPs are employed only where a space saving is worth the money: for example in high-end refrigerators and freezers.

The new film is easier to produce because it is made up of just two plastic films with three barrier layers: one aluminum-coated plastic film is coated with a micrometer-thin layer of ORMOCER® – an ISC invention – and then coated again with aluminum. ORMOCER®s contain an organic-inorganic hybrid silicon-oxygen polymer matrix, which makes the material exceptionally tight and stable. "That's what makes it perfect for insulation panels," says Noller. "Gases and liquids cannot easily penetrate the ORMOCER® layer." The new insulation films can be fashioned in just five stages. First a film is coated, then the ORMOCER® layer applied, then coated a second time before the barrier film is applied to the sealing film. "The end product is better and cheaper than the insulation films already on the market," claims Sextl. 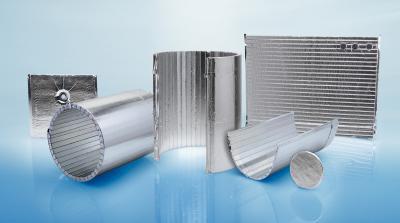 Researchers have also optimized the production of the VIP insulation elements: at the Fraunhofer Application Center for Processing Machines and Packaging Technology AVV in Dresden they have developed an automated process for gently sealing the pyrogenic silica cores with the high-barrier film. The films and production process have now been patented. As soon as the new VIPs are being produced in large enough quantities, the price should fall. Sextl and Noller are convinced that the thin panels will then be of interest for the building industry.

Now researchers want to simplify the production process further and carry out long-term tests. Until now the panels had to last just twelve years – the average lifespan of a refrigerator. The building sector has higher expectations: a facade should last fifty years. Noller and his colleagues are now testing the stability of films and insulation elements in climate chambers, which simulate the seasonal changes in heat and frost and in humidity. The results should be available in just a few months.