SAN FRANCISCO – Dec. 8, 2011 – A groundbreaking study led by University of Miami (UM) scientist Shimon Wdowinski shows that earthquakes, including the recent 2010 temblors in Haiti and Taiwan, may be triggered by tropical cyclones (hurricanes and typhoons). Wdowinski will discuss his findings during a presentation at the 2011 AGU Fall Meeting in San Francisco.

"Very wet rain events are the trigger," said Wdowinski, associate research professor of marine geology and geophysics at the UM Rosenstiel School of Marine and Atmospheric Science. "The heavy rain induces thousands of landslides and severe erosion, which removes ground material from the Earth's surface, releasing the stress load and encouraging movement along faults."

Wdowinski and a colleague from Florida International University analyzed data from quakes magnitude-6 and above in Taiwan and Haiti and found a strong temporal relationship between the two natural hazards, where large earthquakes occurred within four years after a very wet tropical cyclone season.

The 2010 M-7 earthquake in Haiti occurred in the mountainous region one-and-a-half years after two hurricanes and two tropical storms drenched the island nation within 25 days. 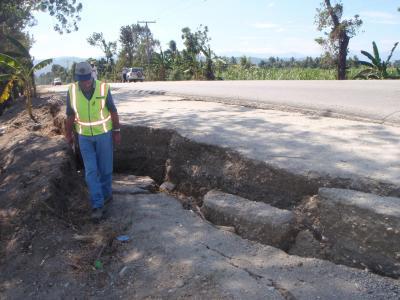 New study presented at AGU by University of Miami professor Shimon Wdowinski may help scientists identify regions at high risk for earthquakes. Wdowinski shows that earthquakes, including the recent 2010 temblors in Haiti and Taiwan, may be triggered by tropical cyclones and the wet rains that accompany them.

The researchers suggest that rain-induced landslides and excess rain carries eroded material downstream. As a result the surface load above the fault is lessened.

"The reduced load unclamp the faults, which can promote an earthquake," said Wdowinski.

Fractures in Earth's bedrock from the movement of tectonic plates, known as faults, build up stress as they attempt to slide past each other, periodically releasing the stress in the form of an earthquake.

According to the scientists, this earthquake-triggering mechanism is only viable on inclined faults, where the rupture by these faults has a significant vertical movement.

Wdowinski also shows a trend in the tropical cyclone-earthquake pattern exists in M-5 and above earthquakes. The researchers plan to analyze patterns in other seismically active mountainous regions – such as the Philippines and Japan – that are subjected to tropical cyclones activity.