LOUISVILLE, Ky. – Paleontologist Guillermo Rougier, Ph.D., professor of anatomical sciences and neurobiology at the University of Louisville, and his team have reported their discovery of two skulls from the first known mammal of the early Late Cretaceous period of South America. The fossils break a roughly 60 million-year gap in the currently known mammalian record of the continent and provide new clues on the early evolution of mammals.

Details of their find will be published Nov. 3 in Nature. Co-authors are Sebastián Apesteguía of Argentina's Universidad Maimónides and doctoral student Leandro C. Gaetano.

The new critter, named "Cronopio dentiacutus" by the paleontologists, is a dryolestoid, an extinct group distantly related to today's marsupials and placentals.

"Dr. Rougier and his colleagues truly have made an outstanding discovery of the first really informative skull remains belonging to a key mammalian group," said Rich Cifelli, Ph.D., Presidential Professor of Zoology at the University of Oklahoma and a researcher who, like Rougier, has spent his career discovering and identifying mammal remains.

"The discovery of 'Cronopio' is especially notable because it provides for the first time the whole cranial morphology (form and structure) of a dryolestoid," writes Christian de Muizon, director of the Muséum National d'Histoire Naturelle in Paris in a "News and Views" article in the same issue of Nature.

"Cronopio" was shrew-sized, about 4-6 inches in length, and was an insectivore with a diet of the insects, grubs and other bugs of the time. It lived when giant dinosaurs roamed the earth – more than 100 million years ago – and made its home in a vegetated river plain.

The skulls reveal that "Cronopio" had extremely long canine teeth, a narrow muzzle and a short, rounded skull. "These first fossil remains of dryolestoids … give us a complete picture of the skull for the group," John R. Wible, Ph.D., curator of mammals at the Carnegie Museum of Natural History, said. "The new dryolestoid, 'Cronopio,' is without a doubt one of the most unusual mammals that I have seen, extinct or living, with its elongate, compressed snout and oversized canine teeth. What it did with that unusual morphology perhaps may come to light with additional discoveries… ."

Rougier describes "Cronopio" in a manner that fans of a popular animated movie series can easily understand. 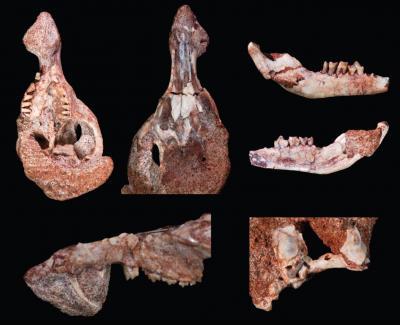 Paleontologist Guillermo Rougier, Ph.D., professor of anatomical sciences and neurobiology at the University of Louisville, and his team have reported their discovery of two skulls from the first known mammal of the early Late Cretaceous period of South America. The new critter, named Cronopio dentiacutus by the paleontologists, is a dryolestoid, an extinct group distantly related to today's marsupials and placentals.

"It looks somewhat like Scrat, the saber-toothed squirrel from 'Ice Age,' " he said.

Cartoon references aside, Rougier, Apesteguía and Gaetano realized almost immediately the importance of the discovery when they located the fossils in 2006 because mammalian skulls are very fragile, small and rarely found.

The skulls were embedded in rock in a remote area of northern Patagonia, about 100 miles from the city of Allen in the Argentinian province of Rio Negro. Removal of the specimens from the rocks encasing them took several years of patient lab work, which eventually confirmed that the skulls were the first of their kind found.

"We knew it was important, based on the age of the rocks and because we found skulls," Rougier said. "Usually we find teeth or bone fragments of this age. Most of what we know of early mammals has been determined through teeth because enamel is the hardest substance in our bodies and survives well the passage of time; it is usually what we have left to study.

"The skull, however, provides us with features of the biology of the animal, making it possible for us to determine this is the first of its kind dating to the early Late Cretaceous period in South America," he said. "This time period in South America was somewhat of a blank slate to us. Now we have a mammal as a starting point for further study of the lineage of all mammals, humans included."

The prospects for further investigation are exciting. "In recent years it has become clear that southern continents hosted their own endemic groups of mammals during the Age of Dinosaurs. But until now, all we have had are isolated teeth and a few jaw fragments … which don't really help much in deciphering broader relationships," Cifelli said. "For this reason, the new fossils provide a sort of Rosetta Stone for understanding the genealogy of early South American mammals, and how they fit in with those known from northern landmasses. Now the burden is on the rest of us to find similarly well preserved fossils from elsewhere, so that the broader significance of Rougier's finds can be fully placed in context."

In addition to conducting research, Rougier teaches anatomy to UofL School of Medicine students and said the discovery extends the knowledge of our lineage.

"This tells us a little more of the full history of our lineage, a very resilient lineage," he said. " 'Cronopio' lived in a completely different world than ours, dominated by dinosaurs and with a different geography; these new fossils give us information on how transient and ever-evolving our world is."

Rougier, a native Argentinian, earned his doctorate at Universidad de Buenos Aires and joined the UofL faculty in 1998 following work at the American Museum of Natural History in New York and Museo Argentino de Ciencias Naturales in Buenos Aires. Funding to support his work came from the National Science Foundation, the Antorchas Foundation and the American Museum of Natural History.