Gold radiates with a violet hue, at least when it is sprayed onto a surface atom by atom, as can be seen by looking into a plasma coating plant when in operation. This particular plant, which is about as large as a household refrigerator, can be found on the premises of the Tersuisse spinning mill in Emmen. Inside the apparatus a piece of gold is bombarded with fast moving argon ions which knock atoms off the metal surface. These gold atoms fly off and land on a polyester fiber which is slowly pulled through the machine. This is the beginning of the production process which for the first time in the world creates a textile material permanently coated with a durable layer of gold. The precious metal remains attached to the fiber even when it is rolled, kinked, woven in a loom and given a final wash.

The culmination of 10 years of research work

The textile specialists at Empa in St Gallen had been researching for ten years to find a method of finely dividing titanium, aluminium, steel, copper and silver and then allowing these powdered metals in atomic form to rain onto polyester fibers. Originally the project aimed to create silver coated fibers, for which there were ready markets. Silver coated fibers possess an antibacterial effect, something which is of interest to sock manufacturers. In addition fashion designers were seeking durable silver coated textiles. And furthermore, silver conducts electricity extremely well, making the Empa-developed fiber eminently suitable for use in various sensors and as an antistatic filter material for industrial applications.

Sooner or later the project partners had the idea that what was possible with silver might also work with gold, so in January 2010 they began work on the "Gold Fiber Project". Nowadays production in the coating plant has reached a stable level. The first kilometer was generated in the summer of 2011 and in 2012 production is expected to increase further. Further processing of the fiber is completed by two project partners, the Weisbrod-Zuerrer AG spinning mill in Hausen am Albis and the embroidery firm Jakob Schlaepfer in St. Gallen.

The cost of exclusivity: 7500 Swiss francs

One of the first customers for the gold fiber was Weisbrod-Zürrer AG, a spinning mill which specializes in exclusive decorative textiles, ties and accessories and which has also partnered Empa projects in the past. Attempts had already been made previously to create a gold tie using conventional techniques. A textile fiber was wound with the finest gold wire in the same way a guitar string is made. However material woven from the fiber had a rough, metallic feel to it and it was also not durable enough for commercial use. As a result it was only possible to make the freestanding front face of the tie in gold thread – those parts which were mechanically stressed, the knot and the neck piece, had to remain black. 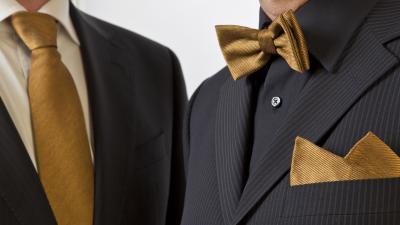 Pictured are an exclusive tie, bow-tie and pocket handkerchief made of the high-tech gold material.

The new gold tie made using the Empa plasma coating process boasts a much more stylish appearance. The golden material, woven from gold fiber and black silk thread, covers the surface of the entire tie and is very soft to the touch. Other exclusive items of clothing from the same material are also imaginable, for example decorative pocket handkerchiefs, bow-ties, scarves, lace decorative work and even handbags. To date material enough for three ties has been manufactured, but a dozen more should be ready in time for Christmas. The first, worldwide exclusive series, tailored in the Zürich tie manufactory Hofmann und Co AG will be on offer to gentlemen with an exclusive sense of style at Swiss francs 7500 apiece.

How much gold is there on it?

This is a question which is bound to interest not just the proud owner of a gold tie, but those around him as well – particularly when the wearer steps out into the sunlight and his neck apparel begins to shimmer with its characteristic hue. The calculation is quite easy; a textile panel large enough to make three ties is coated with 25 grams of pure, 24 carat gold. Each tie therefore glows with 8 grams of gold. There is little chance that these exclusive gold ties will become mass produced fashion accessories in the near future – even at full capacity production is limited to a maximum of 600 pieces annually for the world market. In actual fact it is certain that far fewer will actually be produced, since a part of the gold coated thread which is produced is reserved for other project partners. The Jakob Schlaepfer company, embroiderers and manufacturers of decorative textiles, will also use the gold yarn for items in its Winter 2012/13 Haute Couture collection.