Berkeley — Trees are dying in the Sahel, a region in Africa south of the Sahara Desert, and human-caused climate change is to blame, according to a new study led by a scientist at the University of California, Berkeley.

"Rainfall in the Sahel has dropped 20-30 percent in the 20th century, the world's most severe long-term drought since measurements from rainfall gauges began in the mid-1800s," said study lead author Patrick Gonzalez, who conducted the study while he was a visiting scholar at UC Berkeley's Center for Forestry. "Previous research already established climate change as the primary cause of the drought, which has overwhelmed the resilience of the trees."

The study, which is scheduled for publication Friday, Dec. 16, in the Journal of Arid Environments, was based upon climate change records, aerial photos dating back to 1954, recent satellite images and old-fashioned footwork that included counting and measuring over 1,500 trees in the field. The researchers focused on six countries in the Sahel, from Senegal in West Africa to Chad in Central Africa, at sites where the average temperature warmed up by 0.8 degrees Celsius and rainfall fell as much as 48 percent.

They found that one in six trees died between 1954 and 2002. In addition, one in five tree species disappeared locally, and indigenous fruit and timber trees that require more moisture took the biggest hit. Hotter, drier conditions dominated population and soil factors in explaining tree mortality, the authors found. Their results indicate that climate change is shifting vegetation zones south toward moister areas. 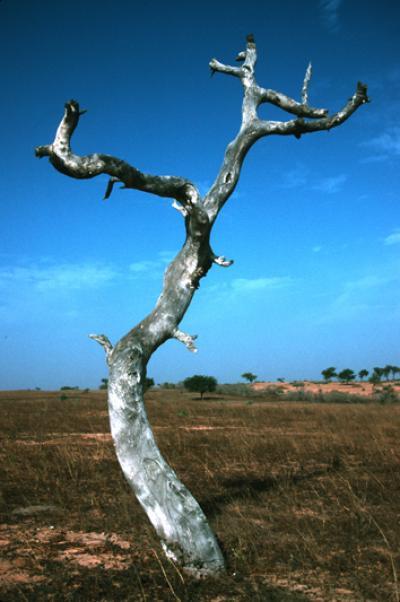 A dead ironwood tree (Prosopis africana) in Senegal, West Africa, is one of many trees that have died due to climate change.

"In the western U.S., climate change is leading to tree mortality by increasing the vulnerability of trees to bark beetles," said Gonzalez, who is now the climate change scientist for the National Park Service. "In the Sahel, drying out of the soil directly kills trees. Tree dieback is occurring at the biome level. It's not just one species that is dying; whole groups of species are dying out."

The new findings put solid numbers behind the anecdotal observation of the decline of tree species in the Sahel.

"People in the Sahel depend upon trees for their survival," said Gonzalez. "Trees provide people with food, firewood, building materials and medicine. We in the U.S. and other industrialized nations have it in our power, with current technologies and practices, to avert more drastic impacts around the world by reducing our greenhouse gas emissions. Our local actions can have global consequences." 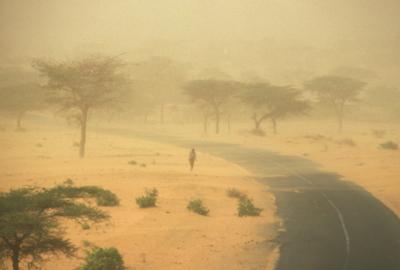 Rainfall in the African Sahel declined more than anywhere else in the world in the period of recorded measurements, causing increased aridity, as evidenced by this dust storm in Senegal.