Blocked holes can enhance rather than stop light going through

Conventional wisdom would say that blocking a hole would prevent light from going through it, but Princeton University engineers have discovered the opposite to be true. A research team has found that placing a metal cap over a small hole in a metal film does not stop the light at all, but rather enhances its transmission.

In an example of the extraordinary twists of physics that can occur at very small scales, electrical engineer Stephen Chou and colleagues made an array of tiny holes in a thin metal film, then blocked each hole with an opaque metal cap. When they shined light into the holes, they found that as much as 70 percent more light came through when the holes were blocked than when they were open.

"The common wisdom in optics is that if you have a metal film with very small holes and you plug the holes with metal, the light transmission is blocked completely," said Chou, the Joseph Elgin Professor of Engineering. "We were very surprised."

Chou said the result could have significant implications and uses. For one, he said, it might require scientists and engineers to rethink techniques they have been using when they want to block all light transmission. In very sensitive optical instruments, such as microscopes, telescopes, spectrometers and other optical detectors, for example, it is common to coat a metal film onto glass with the intention of blocking light. Dust particles, which are unavoidable in metal film deposition, inevitably create tiny holes in the metal film, but these holes have been assumed to be harmless because the dust particles become capped and surrounded by metal, which is thought to block the light completely.

"This assumption is wrong -- the plug may not stop the leakage but rather greatly enhance it," Chou said. 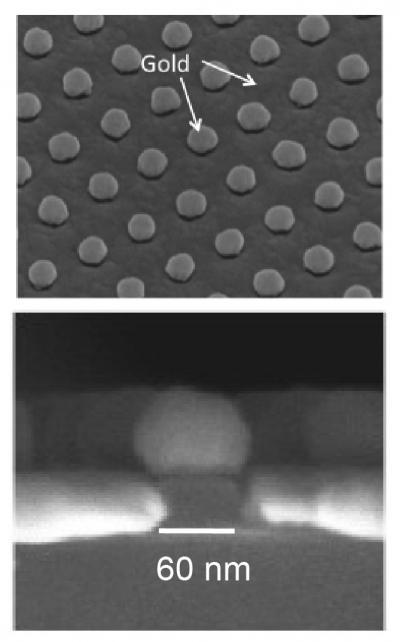 These electron microscope images show an experiment in which Princeton electrical engineer Stephen Chou showed that blocking a hole in a thin metal film could cause more light to pass through the hole than leaving the hole unblocked. The top image shows an array of holes with gold caps, each of which is 40 percent bigger than the hole on which it sits. The bottom image shows a cross-section view of one hole with the cap sitting on top. The hole covered with the cap surprisingly allows more light to be transmitted through the film than a hole without the cap, Chou's research team found.

He explained that in his own field of nanotechnology, light is often used in a technique called photolithography to carve ultrasmall patterns in silicon or other materials. Thin metal film patterns on a glass plate serve as a mask, directing light through certain locations of the plate and blocking other locations. Given the new finding, engineers ought to examine whether the mask blocks the light as expected, Chou said.

Conversely, Chou said, the newly discovered "blocking" technique might be used in situations when a boost in light transmission is desired. In near-field microscopy, for example, scientists view extremely fine details by passing light through a hole as tiny as billionths of a meter in diameter. With the new technique, the amount of light passing through the hole -- and thus the amount of information about the object being viewed -- can be increased by blocking the hole.

Chou and colleagues stumbled on the phenomenon of enhanced light transmission through a blocked hole in their research on developing ultrasensitive detectors that sense minute amounts of chemicals, with uses ranging from medical diagnostics to the detection of explosives. These detectors use a thin metal film with an array of holes and metal disks to boost faint signals produced when laser light encounters a molecule, allowing much greater sensitivity in identifying substances.

In one of their experimental detectors, the researchers studied transmission of light through an array of tiny holes that were 60 nanometers (billionths of a meter) in diameter and 200 nanometers apart in a gold film that was 40 nanometers thick. Each tiny hole was capped with a gold disk that was 40 percent larger than the hole. The disks sat on top of the holes with a slight gap between the metal surface and the disks.

The researchers pointed a laser at the underside of the film and tested to see if any of the laser light went through the holes, past the caps, and could be detected on the other side. To their surprise, they found that the total light transmission was 70 percent higher with the holes blocked by the metal disks than without blockers. The researchers repeated the same experiment shining the light in the opposite direction -- pointing at the side with the caps and looking for transmitted light under the film -- and found the same results.

"We did not expect more light to get through," Chou said. "We expected the metal to block the light completely."

Chou said the metal disk acts as a sort of "antenna" that picks up and radiates electromagnetic waves. In this case, the metal disks pick up light from one side of the hole and radiate it to the opposite side. The waves travel along the surface of the metal and leap from the hole to the cap, or vice versa depending on which way the light is traveling. Chou's research group is continuing to investigate the effect and how it could be applied to enhance the performance of ultrasensitive detectors.