A question of pressure 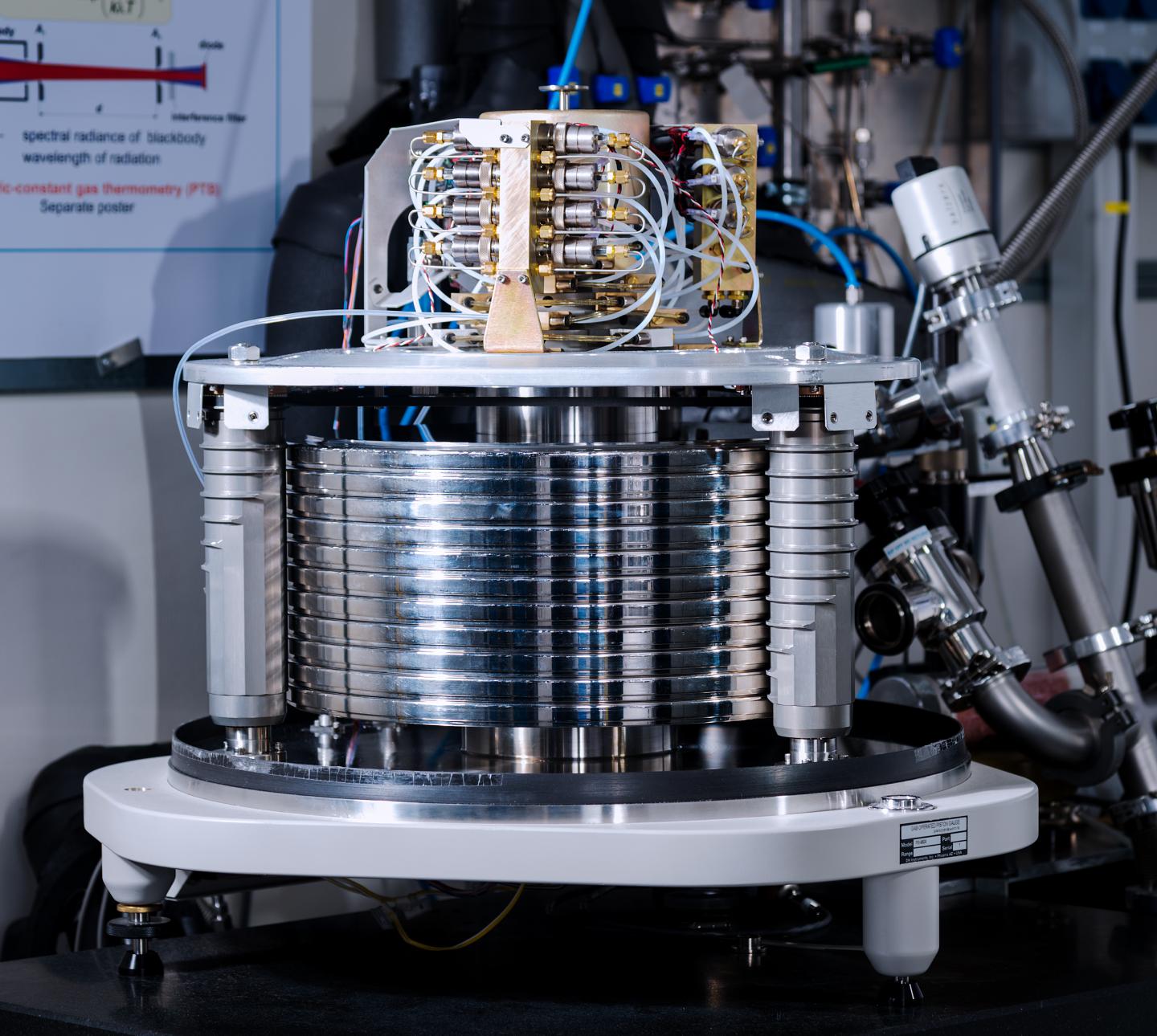 IMAGE: One of the newly developed, highly accurate pressure balances.

Scientists from the Physikalisch-Technische Bundesanstalt (PTB) have implemented a novel pressure measurement method, quasi as a byproduct of the work on the "new" kelvin. In addition to being new, this procedure is a primary method, i.e. it only depends on natural constants. As an independent method, it can be used to check the most accurate pressure gauges, for which PTB is known as the world leader. Checking such instruments was formerly possible in the range of up to 100 000 pascals only; now 7 million pascals are feasible. A comparison between mechanical and electrical pressure measurements has thus been carried out for the first time with a relative uncertainty of less than 5 × 10-6. Moreover, this new method offers unique possibilities to investigate helium - an important model system for the fundamentals of physics. The scientists have reported their work in the current issue of Nature Physics.

Have you ever been stepped on by a person wearing stilettos? If you are familiar with this kind of pain, you may have already considered that pressure corresponds to a force per unit of surface, or, to be more precise, that it is the result of a force applied vertically onto a surface. This is also the principle according to which the most accurate methods of pressure measurement work. When using a pressure balance, you measure the pressure of the gas under a piston of an exactly known surface by determining the gravitational force exerted onto the piston. PTB's pressure balances are currently the most accurate piston gauges in the world - high-precision instruments, each of them manufactured with great effort. As there are, however, pressure ranges in which even the best pressure balances do not measure as accurately as metrologists would like them to. There had been endeavors to develop alternative pressure measurement methods for a long time. "Our new method is actually very simple: it is based on measuring the density of the measuring gas helium by means of a capacitance measurement. It means that we measure to what degree the gas changes the capacitance of a special, highly stable capacitor between the electrodes," explains Christof Gaiser, physicist at PTB. This method only refers to one universal property of helium gas, which is expressed via the dielectric constant; it is therefore a primary method.

Gaiser and his colleagues have thus succeeded in realizing a groundbreaking theoretical approach for the first time in practice. As early as 1998, Mike Moldover of the US American metrology institute NIST had voiced his idea of measuring pressure via an electrical (capacitance) measurement using theoretical calculations of the gas properties of helium. In the following years, however, implementing this thought proved to be a real challenge. Both the precision capacitance measurement and the highly stable capacitors needed for this purpose, as well as the theoretical calculations using solely natural constants (ab initio calculations) were not yet possible with the required accuracy. Moreover, there was no accurate possibility to compare them with conventional pressure balances.

Each of the experimental obstacles has been removed at PTB over the last decade. Due to activities carried out within the scope of the new definition of the base unit kelvin, which reached its apex on 20 May this year with the introduction of an enhanced system of units, conventional pressure measurements both with pressure balances and via capacitance measurements were raised to an unprecedented level worldwide. Thanks to the latest theoretical calculations achieved by diverse research groups across the globe, it has now become possible to measure a pressure of 7 million pascals (i.e. 70 times normal pressure) with a relative uncertainty of less than 5 × 10-6. This measurement has been confirmed by comparison with a conventional pressure balance. It was the first comparison on an equal footing between mechanical and electrical pressure measurements.

Thus, a second method is now available to calibrate pressure with high accuracy. The method itself and the direct comparison with the conventional pressure standard offer, for one thing, the possibility to verify theoretical calculations of helium - an important model system in atomic physics. For another, they also allow other gases to be measured and thus, both theory and gas metrology to be further developed.
(es/ptb)