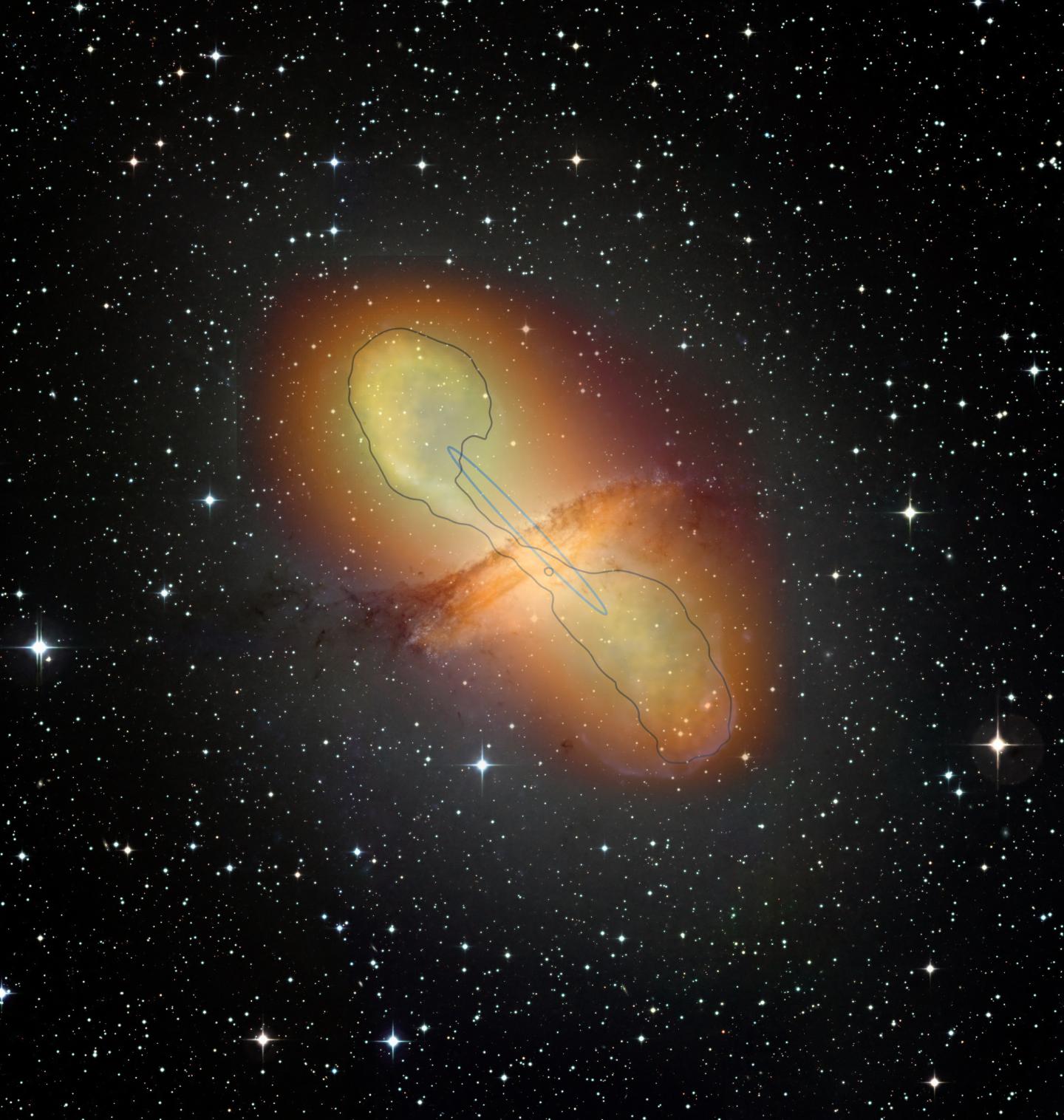 IMAGE: Composite image of Centaurus A, showing the jets emerging from the galaxy's central black hole, together with the associated gamma radiation.

An international collaboration bringing together over 200 scientists from 13 countries has shown that the very high-energy gamma-ray emission from quasars, galaxies with a highly energetic nucleus, is not concentrated in the region close to their central black hole but in fact extends over several thousand light-years along jets of plasma. This discovery shakes up current scenarios for the behaviour of such plasma jets. The work, published in the journal Nature on June 18th, 2020, was carried out as part of the H.E.S.S collaboration, involving in particular the CNRS and CEA in France, and the Max Planck society and a group of research institutions and universities in Germany.

Over the past few years, scientists have observed the Universe using gamma rays, which are very high-energy photons. Gamma rays, which form part of the cosmic rays that constantly bombard the Earth, originate from regions of the Universe where particles are accelerated to huge energies unattainable in human-built accelerators. Gamma rays are emitted by a wide range of cosmic objects, such as quasars, which are active galaxies with a highly energetic nucleus. The intensity of the radiation emitted from these systems can vary over very short timescales of up to one minute. Scientists therefore believed that the source of this radiation was very small and located in the vicinity of a supermassive black hole, which can have a mass several billion times that of the Sun's. The black hole is thought to gobble up the matter spiralling down into it and eject a small part of it in the form of large jets of plasma, at relativistic speeds, close to the speed of light, thus contributing to the redistribution of matter throughout the Universe.

Using the H.E.S.S. (1) observatory in Namibia, an international astrophysics collaboration observed a radio galaxy (a galaxy that is highly luminous when observed at radio wavelengths) for over 200 hours at unparalleled resolution. As the nearest radio galaxy to Earth, Centaurus A is favourable to scientists for such a study, enabling them to identify the region emitting the very high-energy radiation while studying the trajectory of the plasma jets. They were able to show that the gamma-ray source extends over a distance of several thousand light-years. This extended emission indicates that particle acceleration does not take place solely in the vicinity of the black hole but also along the entire length of the plasma jets. Based on these new results, it is now believed that the particles are reaccelerated by stochastic processes along the jet. The discovery suggests that many radio galaxies with extended jets accelerate electrons to extreme energies and might emit gamma-rays, possibly explaining the origins of a substantial fraction of the diffuse extragalactic gamma background radiation.

These findings provide important new insights into cosmic gamma-ray emitters, and in particular about the role of radio galaxies as highly efficient relativistic electron accelerators. Due to their large number, it would appear that radio galaxies collectively make a highly significant contribution to the redistribution of energy in the intergalactic medium. The results of this study required extensive observations and optimized analysis techniques with H.E.S.S., the most sensitive gamma-ray observatory to date. Next-generation telescopes (Cherenkov Telescope Array, or CTA) will no doubt make it possible to observe this phenomenon in even greater detail.