The presence of resonating cavities above sunspots has been confirmed 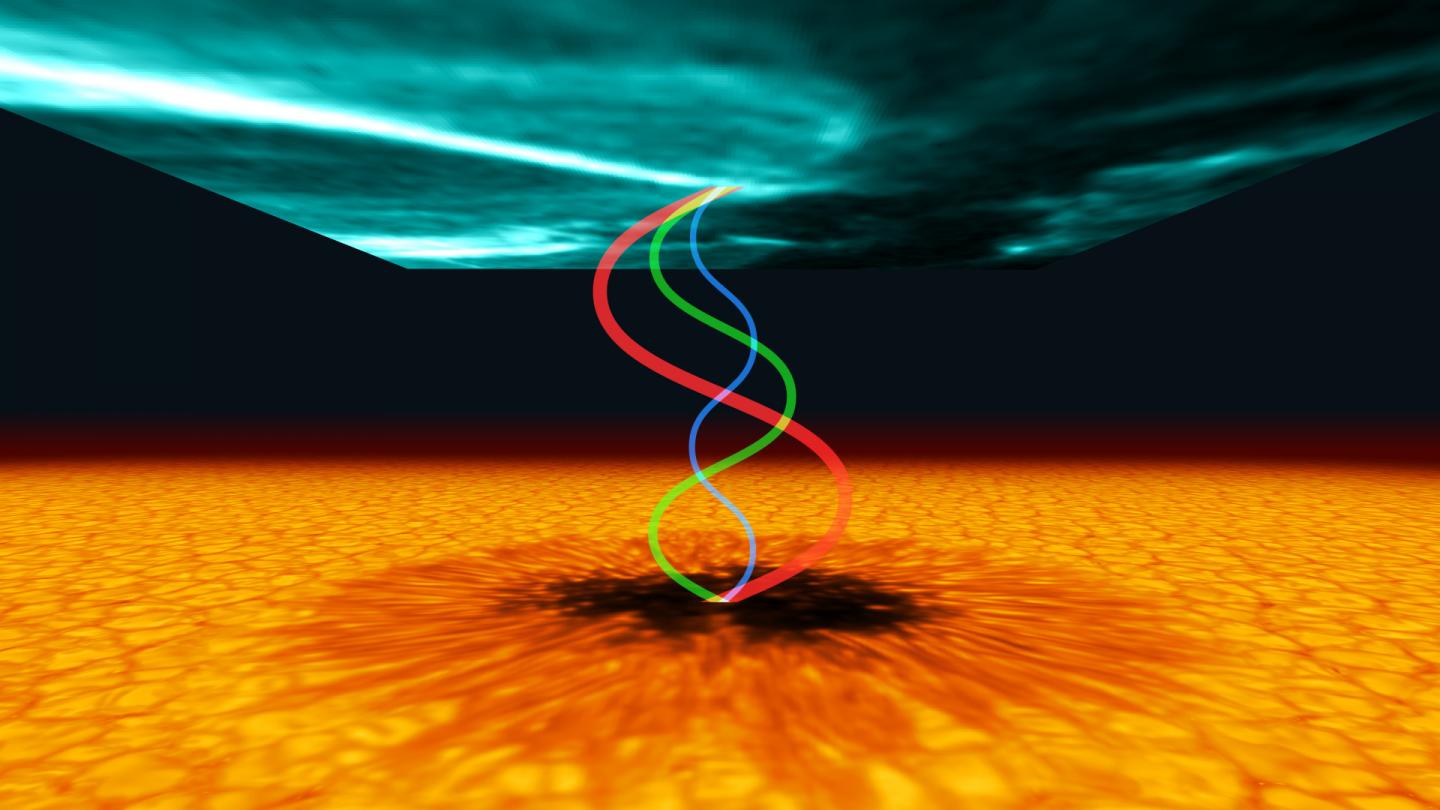 IMAGE: Artist's conception of waves trapped between the surface of a sunspot (lower image, taken with the GREGOR Fabry-Perot Interferometer) and the transition region (upper image, by courtesy of NASA/SDO and...

Sunspots are darker regions which often appear on the Sun's surface. They are caused by strong concentrations of magnetic field, and can be as big as the Earth, or even much bigger.

From the end of the 1960's the presence of oscillations in the atmospheres of these spots has been known, and interpreted as evidence for magnetic waves. These waves have attracted the interest of the researchers, because they could transport energy from the interior layers of the Sun up to the outer regions of the solar atmosphere. They have been proposed as one of the mechanisms which can explain the very high temperatures of the Sun's outer atmosphere, the Corona, one of the major questions in Solar Physics.

The new results show that these waves are partly trapped in a region of the atmosphere above the sunspots, giving rise to resonances. "This phenomenon -says Tobías Felipe, a researcher at the IAC and the first author on both articles- is similar to that produced within a wind instrument or on the strings of a guitar. As the waves are confined within a cavity, certain frequencies are strengthened. In the Sun, the strong variation in temperature close to the surface and in a zone called the transition region causes the waves to be reflected and can be enclosed in these resonant cavities".

For this study numerical simulations have been carried out on the Teide-HPC supercomputer, run by the Institute of Technology and Renewable Energies (ITER), in Tenerife. "Thanks to the simulations, we have been able to evaluate a very large number of models which have allowed us to identify what are the best observational measurements needed to confirm the presence of a resonant cavity, and to rule out those whose interpretation could be challenged", explains Christoph Kuckein, a researcher at the Leibniz Institute for Astrophysics at Potsdam and a coauthor of the studies.

"The high resolution observations taken with the solar telescopes at the Teide Observatory, (GREGOR and VTT) -adds Sergio González Manrique, a researcher who has recently joined the IAC- let us follow in detail the fluctuations in velocity and temperature of several layers of the solar atmosphere. The data agree perfectly with the predictions of the numerical simulations".

As well as explaining a mystery which has lasted several decades, this finding provides a new method for inferring the properties of the solar atmosphere using its oscillations. "Future investigations will benefit from the data obtainable from the coming generation of solar telescopes, such as the European Solar Telescope, which will be installed on La Palma", concludes Tobías Felipe.