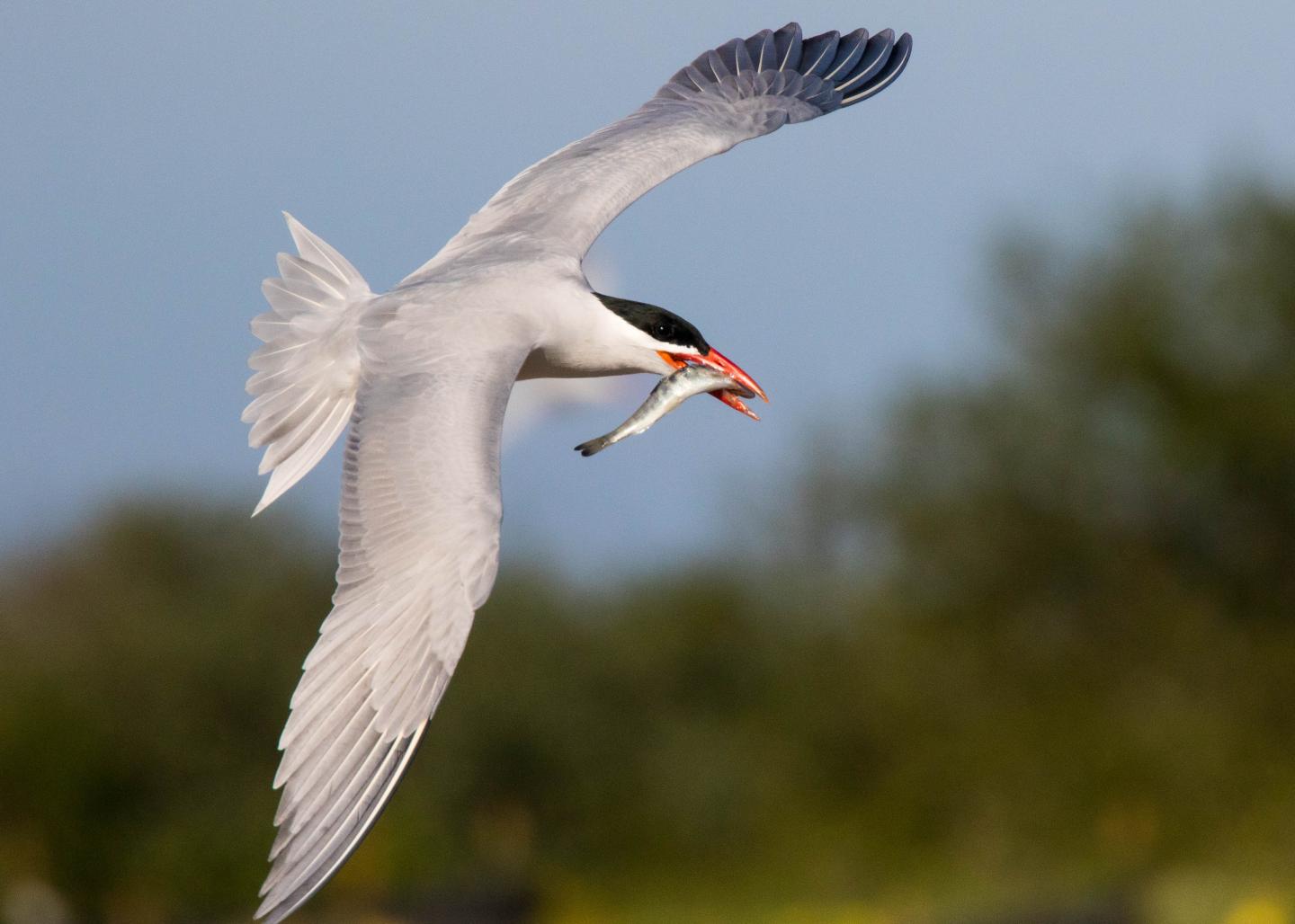 CORVALLIS, Ore. - Caspian terns feeding on young fish have a significant impact on runs of steelhead in the Columbia River, research by Oregon State University suggests.

Through detailed analysis of steelhead survival and Caspian tern predation rates, the researchers found that the birds are not only preying on fish that would perish for some other reason, but are adding to the annual death toll by eating steelhead smolts that would have survived without tern pressure.

In scientific terms, the findings indicate that the terns are having an "additive" effect on prey mortality rather than a "compensatory" one.

The study was published in Ecological Applications.

In the Columbia Basin, 13 of 20 populations of anadromous salmon and steelhead are listed as threatened or endangered under the Endangered Species Act. Caspian terns, a protected migratory bird species native to the region, have been the object of predator management in the Columbia Basin in an effort to protect smolts, especially steelhead smolts, from being eaten before they can swim downstream to the ocean.

The largest breeding colony of Caspian terns in the world was formerly on a small island in the lower Columbia River estuary between Oregon and Washington. It hosted more than 10,000 breeding pairs in 2008, just prior to implementation of nonlethal management to reduce colony size to between 3,125 and 4,375 breeding pairs.

"There has been little research, however, into whether reduced predation actually results in greater overall salmonid survival, either at the smolt stage, where the predation is taking place, or across the lifetime of the fish," said Oregon State's Dan Roby, professor emeritus in the Department of Fisheries and Wildlife of the College of Agricultural Sciences. "Without clear evidence that reduced predation means greater survival to adulthood, management to reduce predator impacts would be a waste of time and resources."

To tackle the question, Roby and collaborators at Real Time Research, Inc., of Bend and the University of Washington looked at 11 years' worth of mark-recapture-recovery data for almost 80,000 steelhead trout smolts from the Upper Columbia population that were tagged and released to continue their out-migration to the ocean.

After release, the tagged fish were exposed to predation throughout multiple stretches of river on their journey toward the Pacific. The tag-recovery data made possible estimates of the weekly probability of steelhead survival, mortality from being eaten by birds and death from other causes.

"This approach allowed us to directly measure the connection between smolt survival and tern predation," Roby said.

"Our results provide the first evidence that predation by Caspian terns may have been a super additive source of mortality during the smolt stage and a partially additive source in the smolt-to-adult life stage," Roby said. "A persistent pattern was clear: For each additional 10 steelhead smolts successfully consumed by Caspian terns, about 14 fewer smolts from each cohort survived out-migration."

Another pattern: On average, for every 10 steelhead smolts eaten by terns, one fewer individual from each cohort returned to the Columbia Basin as an adult.

"Our model shows that mortality from tern predation was primarily additive and therefore has a credible, significant impact on prey survival," Roby said. "Predator-prey models need to consider additive effects of predation across life stages to avoid exaggerating potential benefits from management actions aimed at reducing predator populations to enhance prey populations. The primary value of the study is by analyzing the true effects of natural predators on populations of their prey, and thereby assessing the conservation value to prey of managing predators."

Roby notes that the study by OSU, Real Time Research, and the University of Washington contradicts recently published research by scientists with the U.S. Fish and Wildlife Service and the Fish Passage Center, who found that steelhead mortality due to tern predation is compensatory.

That paper, in the Journal of Wildlife Management, suggests that "management efforts to reduce the abundance of the [tern] colonies are unlikely to improve the survival or conservation status of steelhead."