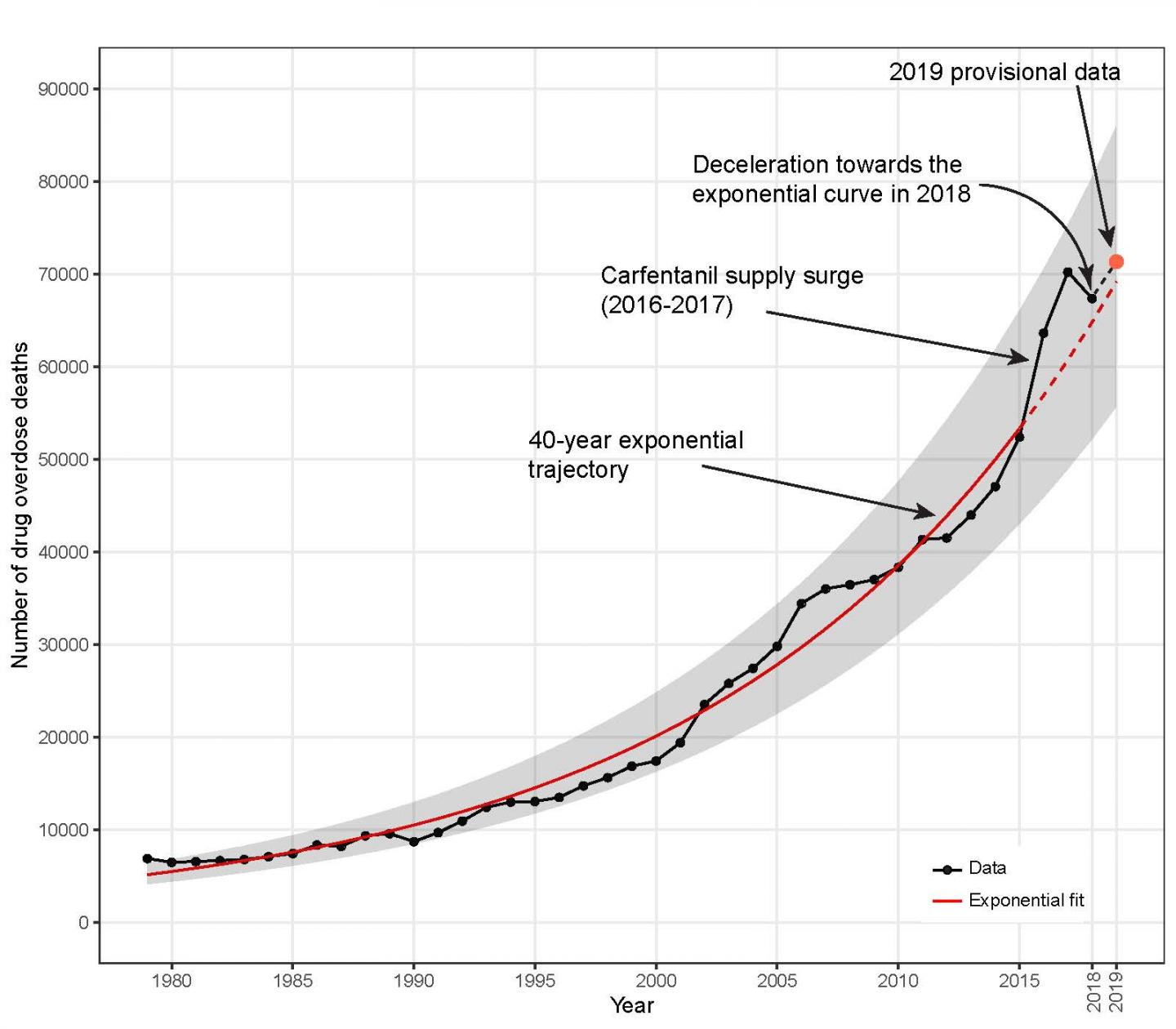 IMAGE: The spike in overdose deaths in 2016-2017, and their return to the expected trajectory in 2018 coincide with availability and disappearance of the powerful drug carfentanil.

PITTSBURGH, Sept. 16, 2020 - The slight decline in drug overdose deaths in 2018 coincided with changing Chinese regulations on a powerful type of opioid, rather than the result of U.S. efforts to curb the overdose epidemic, a University of Pittsburgh Graduate School of Public Health analysis revealed today in the journal Addiction.

What many--including President Donald Trump--perceived as a decline in overdose deaths in 2018 appears to be a return to the historic exponential curve. The finding is backed by preliminary federal data showing that the overdose death rate last year snapped back onto its long-term growth pattern, tallying more than 1 million deaths in the U.S. in the past four decades.

"The U.S. has not bent the curve on the drug overdose epidemic," said lead author Hawre Jalal, M.D., Ph.D., assistant professor of health policy and management at Pitt Public Health. "We are concerned that policymakers may have interpreted the one-year downturn in 2018 as evidence for an especially effective national response or the start of a long-term trend. Unfortunately, that isn't supported by the data."

Pitt Public Health scientists had previously demonstrated that overdose deaths have fit on an exponential curve since at least 1979, with the number of deaths doubling every 10.7 years. In 2016 and 2017, the death rate exceeded the curve's prediction by 22% and 11%, respectively. But in 2018, the rate declined by 4.1%, the first drop in overdose deaths since 1990.

Curious about what drove the drop, Jalal and Donald Burke, M.D., former dean of Pitt Public Health, crossed drug overdose data from the U.S. Centers for Disease Control and Prevention (CDC) with U.S. Drug Enforcement Administration (DEA) information on the types of drugs seized and submitted to state crime labs.

Carfentanil, an opioid that is 10,000 times more powerful than morphine and has no known medical use in humans, was rarely detected by these labs before 2016, when it began popping up in law enforcement drug seizures, peaking in 2017 and suddenly declining in 2018. The 2017 spike was concentrated in five states: Ohio, Florida, Pennsylvania, Kentucky and Michigan.

In 2017, China added carfentanil to its list of controlled substances, and, shortly thereafter, the U.S. supply dried up, coinciding with 2018's drop in overdose deaths.

"We all celebrated when the overdose death rate dropped, but it was premature," said Burke, Distinguished University Professor of Health Science and Policy in Pitt Public Health's Department of Epidemiology. "When policymakers believe a problem is solved, history has shown that funding is reprioritized to other efforts. The drug overdose epidemic is not solved. It continues to track along an ever-rising curve, with deaths doubling nearly every decade. We must address the root causes of this epidemic."

Jalal and Burke noted that the COVID-19 pandemic is likely to drive higher overdose deaths, especially since they tend to follow job losses, and social distancing means people may overdose alone, decreasing their chances of receiving life-saving care.

"This is a particularly critical time for the drug overdose epidemic, given the diversion of health care resources and the national attention to the COVID-19 pandemic," Jalal said. "The epidemic has continued brewing under the COVID-19 pandemic for half a year now. There is no indication that it's slowing."