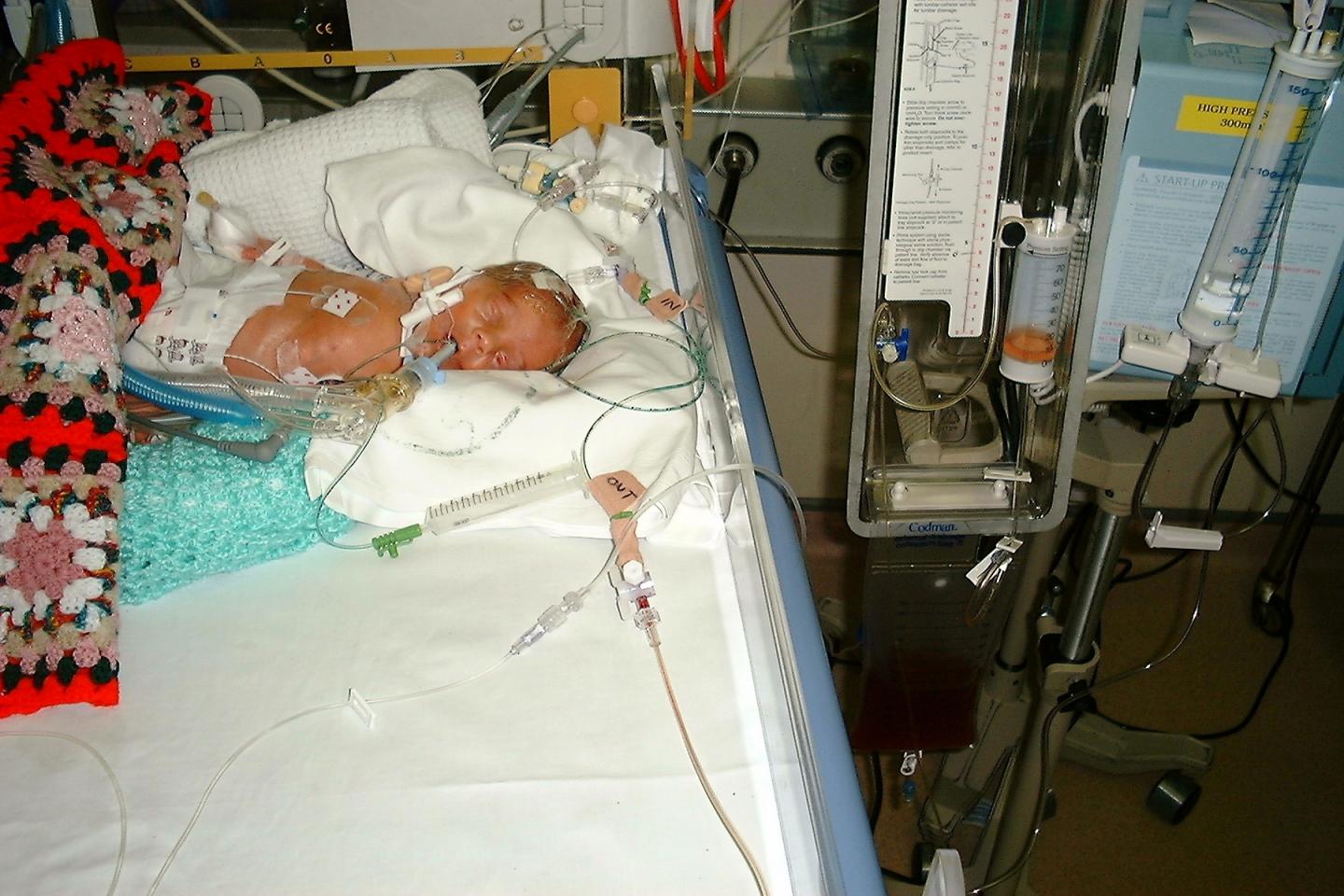 IMAGE: This is an image of Isaac Walker-Cox at hospital during the DRIFT treatment.

Premature babies with serious brain haemorrhage treated with a 'brain washing' technique pioneered by Bristol researchers have shown in a 10-year follow-up study, were twice as likely to survive without severe learning disability when compared with infants given standard treatment. The findings are published today [5 July] in the journal Archives of Diseases in Childhood.

The surgical technique called 'Drainage, Irrigation and Fibrinolytic Therapy' (DRIFT), is the first and only treatment to objectively benefit infants with serious brain haemorrhage, known as intraventricular haemorrhage (IVH) which can lead to severe learning impairment and cerebral palsy.

Pioneered in 1998 and trialled from 2003 by Andrew Whitelaw, Professor of Neonatal Medicine at the University of Bristol and Ian People, Consultant Neurosurgeon from University Hospitals Bristol NHS Foundation Trust, the therapy aimed to reduce disability in premature babies with serious brain haemorrhage by washing out the ventricles in the brain to remove toxic fluid and reduce pressure.

In this NIHR-funded (DRIFT10) ten-year follow-up study, researchers assessed 52 of the 65 survivors from the original (DRIFT) cohort of 77 premature babies with severe brain haemorrhage who had been recruited for the randomised controlled trial. Of these, 39 babies received the DRIFT intervention, and 38 received standard treatment which uses lumbar punctures to control expansion of the ventricles and reduce pressure.

A research team led by Dr Karen Luyt from Bristol Medical School, traced and assessed the children at age ten and at school, to investigate whether the treatment had led to reduced neurodisability rates.

Using results from cognitive, vision, movement and behaviour assessments, parent /guardian interviews, and educational attainment scores, the team found that the pre-term babies who received DRIFT were almost twice as likely to survive without severe cognitive disability than those who had received standard treatment.

They also found that infants given the DRIFT treatment were also more likely to attend mainstream education.

Dr Luyt, the DRIFT10 study's lead author and Reader in Neonatal Medicine at Bristol Medical School, said: "Bleeding in the brain is one of the most serious complications of preterm birth and premature babies are particularly at risk of bleeding, the condition can cause significant brain injury leading to subsequent severe learning disabilities.

"While a two-year follow-up study showed reduced rates of severe cognitive disability, it was important for us to assess whether the DRIFT intervention had longer-term benefits.

"The results of this study clearly demonstrate that secondary severe brain injury is reduced in preterm infants by using this neonatal intervention, and importantly, this is sustained into middle school-age.

"We hope that these results will be used to inform UK and international healthcare guidelines and support implementation of DRIFT as a clinical service to help improve outcomes for vulnerable babies.

"We would also like to thank the families and the children who took part in the study for their support and significant contribution that has helped advance our treatment of this condition."

"Central to this trial has been patient and public involvement - one of the NIHR's key values - with patients and their parents involved throughout the trial design and process, which has led to its success."

A series of short films explaining the findings are available on the NIHR website.