It's essential to all life, and numerous research papers are published about it every year. Yet there are still secrets to reveal about water, that seemingly simple compound we know as H2O.

Equipped with high-speed computers and the laws of physics, scientists from the University of Delaware and Radboud University in the Netherlands have developed a new method to "flush out" the hidden properties of water--and without the need for painstaking laboratory experiments. 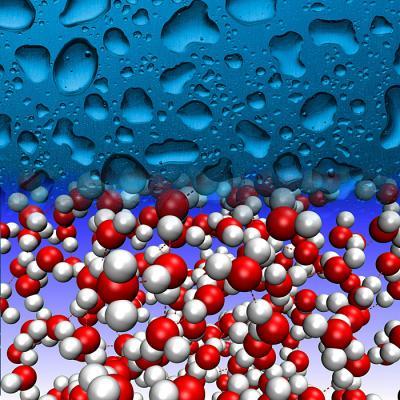 The secrets of water revealed: UD's computer simulation of water molecules is based exclusively on quantum physics laws. Credit: Figure by Omololu Akin-Ojo and David Barczak, University of Delaware.

Their new first-principle simulation of water molecules--based exclusively on quantum physics laws and utilizing no experimental data--will aid science and industry in a broad range of applications, from biological investigations of protein folding and other life processes, to the design of the next generation of power plants.

The research is reported in the article "Predictions of the Properties of Water from First Principles" in the March 2 issue of Science, a prestigious international journal.

Krzysztof Szalewicz, professor of physics and astronomy at the University of Delaware, led the scientific team, which included Robert Bukowski, a former UD postdoctoral researcher who is now at Cornell University, and Gerrit Groenenboom and Ad van der Avoird from the Institute for Molecules and Materials at Radboud University in Nijmegen, Netherlands. The UD research was sponsored by the National Science Foundation.

We all know a molecule of water chemically as H2O--two hydrogen atoms bonded to one oxygen atom. Sounds simple, doesn't it? But liquid water is much more complex than that.

"Water as a liquid is not simple at all and has several properties different from most other liquids," Szalewicz said. "For example, a well-known anomaly of water is that its density is highest at four degrees Celsius above the freezing point. Thus, ice floats on water, whereas the solid state of other compounds would sink in their liquids."

Among its many properties, water also can absorb large amounts of heat before it begins to get hot, and it releases heat slowly during cooling. Otherwise, pools of water, from puddles to oceans, might boil during the day or freeze solid at night, regardless of the season.

Water's unique characteristics are directly related to its molecular structure and the ability of water molecules to form hydrogen bonds with other water molecules.

"For a long time, most researchers agreed that, in its liquid state, each water molecule coordinates on average with four other water molecules by forming hydrogen bonds," Szalewicz said. "However, a 2004 paper in Science claimed that this coordination takes place with only two molecules, a discovery that, if correct, would turn over the whole water paradigm."

The experimental claim was not dismissed right away, Szalewicz said, because existing theoretical models of liquid water were "parameterized" or coordinated to a specific class of experiments.

"However, the ambiguities about the structure of liquid water may be resolved if the structure is predicted directly from the laws of physics," Szalewicz said.

Through the use of quantum mechanics, the application of the laws of physics at the microscopic level, the scientists were able to generate a new theoretical framework for describing the structure and behavior of the water molecule atom by atom.

"This became possible recently when fast multiprocessor computers enabled very accurate solutions of the equations of quantum mechanics describing the forces that water molecules exert on each other," Szalewicz said. "Once these forces are known, one can find motions in an ensemble of water molecules and predict all the properties of liquid water."

The UD researchers used clusters of Linux computers to perform the large-scale computer calculations required for the research. The study took several months to complete.

The result is a new model -- the first that can accurately predict both the properties of a pair of water molecules and of liquid water.

Among its many applications, the research should help scientists better understand water in not only its liquid form, but in other states as well, such as crystalline forms of ice, and water in extreme conditions, including highly reactive "supercritical" water, which is used to remove pollutants in wastewater and recover waste plastic in chemical recycling, Szalewicz said.

Written from a news release by University of Delaware.