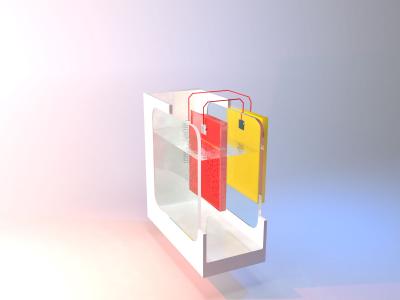 Photoelectrochemical (PEC) water splitting for hydrogen fuel generation has been considered the Holy Grail of electrochemistry. But to achieve it, many scientists believe the materials have to be abundant and low cost.

But there was still a piece missing from the puzzle. Even state-of-the-art Cu2O photocathodes still use metallic back contacts (copper or gold), allowing for considerable electron-hole recombination. Other disadvantages include high cost and that the metal contact won't allow unabsorbed sunlight to pass through.

Now, scientists at EPFL show for the first time, that copper thiocyanate (CuSCN) can be used as a transparent and effective hole transport layer (HTL) for Cu2O photocathodes with overall enhanced performance. The research was led by Professors Anders Hagfeldt, Michael Grätzel, and Kevin Sivula at EPFL's Institute of Chemical Sciences and Engineering.

Detailed analysis on two types of CuSCN showed that a defective structure could be beneficial for hole conduction. Moreover, due to the coincidental alignment between valence bands of CuSCN and Cu2O, the band-tail states assisted hole transport in CuSCN was discovered to allow smooth hole conduction while efficiently block electron transport.

The optical advantages of CuSCN were further exhibited through a standalone PEC-PV tandem delivering a solar-to-hydrogen efficiency of 4.55%. This efficiency (4.55% for 12 h) is currently the highest among all Cu2O-based dual-absorber tandems.

The study presents a clear and impressive advancement beyond the state-of-the-art Cu2O photocathodes, which can contribute and inspire future development in the field.

"Though top numbers are achieved with the oxide material in this work, we believe higher values are not far," says Pan Lingfeng, the paper's first author. "At least three aspects are found to be not optimal, but improving them is very feasible. The efficiency value is getting closer and closer to the one that was previously thought to be the threshold for commercialization."