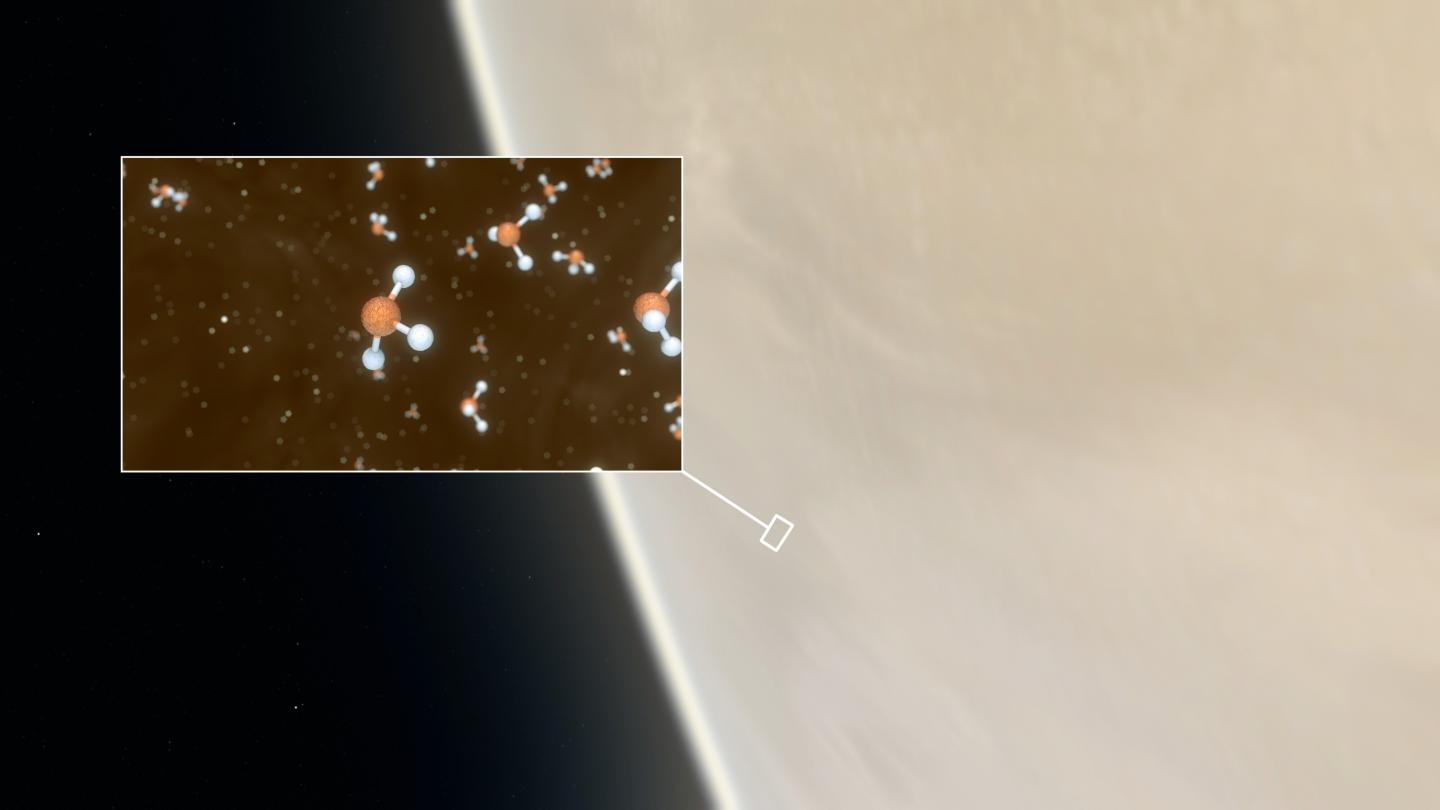 IMAGE: Artist's impression of Venus and the phosphine (PH3) detected in the atmosphere.

An international team of astronomers detected phosphine (PH3) in the atmosphere of Venus. They studied the origin of phosphine, but no inorganic processes, including supply from volcanos and atmospheric photochemistry can explain the detected amount of phosphine. The phosphine is believed to originate from unknown photochemistry or geochemistry, but the team does not completely reject the possibility of biological origin. This discovery is crucial to examine the validity of phosphine as a biomarker.

"When we got the first hints of phosphine in Venus's spectrum, it was a shock!", says team leader Jane Greaves of Cardiff University in the UK, who first spotted signs of phosphine in observations from the James Clerk Maxwell Telescope (JCMT), operated by the East Asian Observatory, in Hawai?i. Confirming their discovery required the Atacama Large Millimeter/submillimeter Array (ALMA) in Chile, a more sensitive telescope. The reason why she was so shocked is that phosphine can be produced by microbes on the Earth [1] , although the research team does not think that they found life on Venus.

How do you find life on a planet from quite far away? One way is to study its atmosphere and find a biomarker that can be evidence of the presence of living forms. If a molecule in the atmosphere is mainly produced by living organisms and the contribution from abiotic origins is negligibly small, it can be a good biomarker.

The international team led by Greaves, including Hideo Sagawa at Kyoto Sangyo University, studied the signal of phosphine in the radio spectra and found that the amount of the molecule is about 20 parts per billion in the atmospheric molecules. This is quite a small amount, but enough to astonish the researchers. This is because researchers have supposed that most of the phosphorus, if it existed in the first place, would bind with oxygen atoms because the Venusian atmosphere has a huge amount of oxygen atoms, although most of them are in the form of carbon dioxide (CO2).

The team carefully examined the possible origins of the phosphine: production by chemical reaction in the atmosphere driven by strong sunlight or lightning, supply from volcanic activity, and delivery by meteorites. The team found that all of these known processes failed to produce the observed amount of phosphine. The amount of phosphine molecules produced by those processes is 10,000 times smaller than the amount detected with the radio telescopes.

The researchers supposed that phosphine is produced by unknown photochemistry or geochemistry, but they also considered the possibility of biological origin. On Earth, some microbes produce and egest phosphine. If similar living organisms were in the Venusian atmosphere, they could produce the detected amount of phosphine.

"Although we concluded that known chemical processes cannot produce enough phosphine, there remains the possibility that some hitherto unknown abiotic process exists on Venus," says Sagawa. "We have a lot of homework to do before reaching an exotic conclusion, including re-observation of Venus to verify the present result itself."

Venus is Earth's twin, in terms of size. However, the atmospheres of the two planets are quite different. Venus has a very think atmosphere and the devastating greenhouse effect raises the surface temperature as high as 460 degrees Celsius. Some researchers argue that the upper atmosphere is much milder and possibly habitable, but the extremely dry and deadly acidic atmosphere would make it difficult for a life form similar to the ones on Earth to survive on Venus.

Further observations with large telescopes on the Earth, including ALMA, and ultimately on-site observations and a sample return of the Venusian atmosphere by space probes will provide crucial information to understand the mysterious origin of the phosphine.