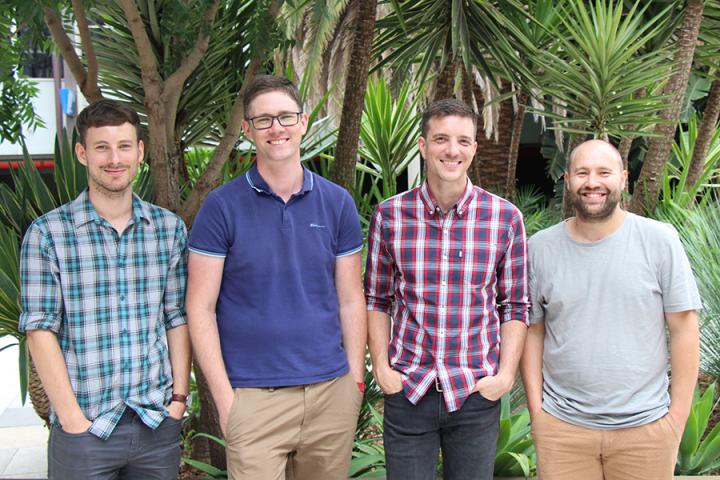 IMAGE: Assistant Professor Max Cryle and members of his lab.

A team of researchers have solved a 20-year riddle of how a crucial step in the biosynthesis of 'last-resort' antibiotics occurs.

In two recent papers published in prestigious journals, the researchers, led by Monash Biomedicine Discovery Institute's Associate Professor Max Cryle, have opened the way to potentially redesigning the antibiotics by altering the peptide assembly involved. This work is linked by a common enzymatic machinery that has great potential to produce highly complex bioactive molecules.

In a study published today in the journal Proceedings of the National Academy of Sciences of the United States of America (PNAS), the team of Monash BDI researchers structurally characterised the peptide bond forming domain in the enzyme 'Ebony' for the first time. Ebony - which is related to the machineries that produce peptide antibiotics in bacteria - plays a central role in the regulation of the neurotransmitters dopamine and histamine in Drosophila. Deletion of Ebony affects external pigmentation but has also been found to alter important functions like vision and circadian regulation.

The study is expected to generate widespread interest in the scientific community from scientists studying protein structure and function, bioengineers and researchers interested in mechanisms of neurotransmitter regulation.

"Ebony is a rare example of a non-ribosomal peptide synthetase (NRPS) from a higher eukaryote," Associate Professor Cryle said, who is also a member of EMBL Australia and the ARC Centre of Excellence in Advanced Molecular Imaging.

"We showed it contains novel types of condensation domain for a NRPS and explained the structure, function and relationship of this enzyme for the first time," he said.

Although this domain appears confined to Drosophila, examples of enzymes related to Ebony have been identified in plants and vertebrates, he said.

"Beyond the interest for neural signalling, this system could be used as an interesting example of taking a eukaryotic enzyme and exploiting it in a bacterial system to make new bioactive compounds."

The rate at which this process works is about 60,000 times faster than that used in the bacteria in the complementary study on peptide-based condensation domains, where specificity is more important than speed.

The team published their findings on the glycopeptide antibiotic biosynthesis of vancomycin and teicoplanin-type antibiotics in the journal Chemical Science late last year.

It sought to reconcile two conflicting hypotheses on the process that had previously been generated based on different approaches - in vitro and in vivo.

"These peptide antibiotics are in clinical use so it's important to understand how they're made," Associate Professor Cryle said.

"This is a prerequisite for re-engineering the biosynthetic machinery to make new ones," he said.

Associate Professor Cryle's team collaborated with the German scientists who concentrated on in vivo approaches, and found that the different approaches used were looking at the biosynthetic machinery working at different rates, and hence affecting the outcomes of each experiment.

"These results show how critical the timing of peptide assembly is to the effective production of these antibiotics, and establishes guidelines for re-engineering efforts to produce new, effective antibiotics," he said.

"That's very important given the rise in antibiotic resistance, which is now recognised as a serious problem."

These two studies have improved our understanding of how the enzymatic machinery that produces many important bioactive peptides ensures the exquisite selectivity naturally found in such assembly lines.

More importantly, it shows ways in which such machineries can be effectively redesigned to produce new, more effective compounds. Many important clinical antibiotics are produced through these machineries. With the threat of antimicrobial resistance looming ever larger, there has never been a greater need to be able to alter these biosynthetic processes to generate new, highly active compounds to control infection. These two studies provide important steps along the road to this goal.