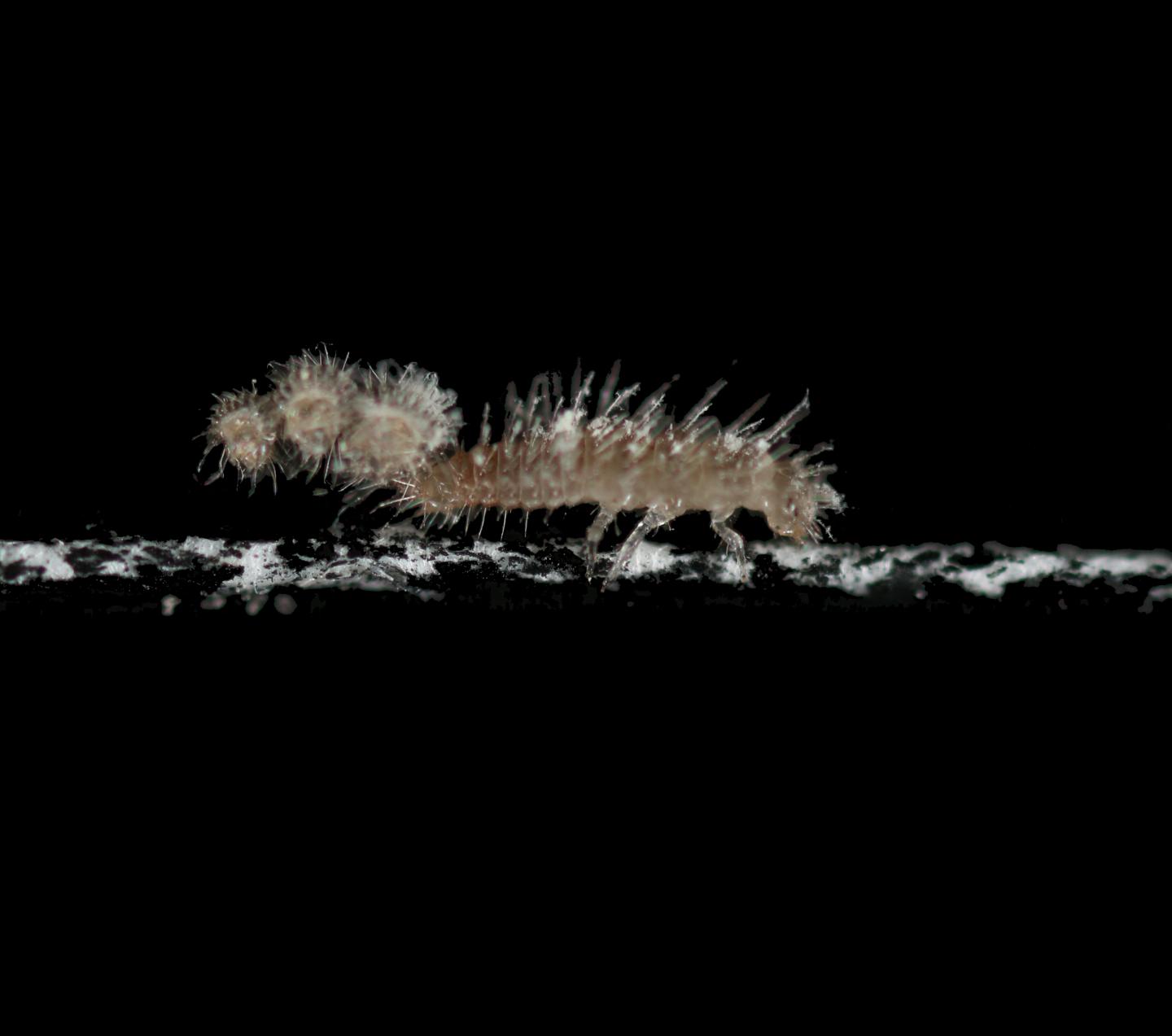 The beetles of family Erotylidae (Coleoptera: Cucujoidea) are morphologically and biologically diversified into six subfamilies, 10 tribes, and over 3,500 species. The tribe Toramini includes 4 genera and is distributed worldwide. Although, the biology of this group is poorly investigated, Leschen (2003) reported that larvae of Toramus and Loberoschema retain exuviae on their abdomen throughout larval development.

In this study, the toramine larvae of 3 species of Toramus and 1 species of Loberoschema are fully described (Fig. 1), and the morphological character states of larval Toramini and within Toramus are discussed. We found that larvae of the genus Toramus attach their exuviae to their distal abdomen, with each exuvia from the preceding instar attached to the next. In live condition, they retain all exuviae, and these exuviae are piled vertically and directed posteriorly as seen in Fig. 2. The exuvial attachment is facilitated by modified hook-like setae with flattened shafts on abdominal tergite VIII, which are inserted into the posterior end of the ecdysial line of the exuvia of the previous instar (Fig. 3).

Why do they carry their exuviae? Among insects, debris-cloaking with feces, exuviae and/or other debris gathered from the habitat occurs in immature insects belonging to assassin bugs (Reduviidae: Hemiptera), lacewings (Chrysopidae: Neuroptera), two families of small beetles (Derodontidae and Anamorphidae: Coleoptera), tortoise beetles (Cassidinae: Chrysomelidae: Coleoptera), geometer moths (Geometridae: Lepidopter) and owlet moths (Noctuidae: Lepidoptera). There have been few studies on the function of debris-cloaking and the exuvial retention of Toramus and anamorphines is distinctive in forming a vertical pile-like "tail" (Fig. 2). We hypothesized that the exuvial attachment of Toramus serves as a kind of autotomy, whereby the exuviae are removed by a predator, thus leaving the body of the larva unharmed -- "exuvial autotomy".

The loss of a tail (caudal autotomy) is well known in lizards, and the loss of an appendage in arthropods (appendage autotomy) has evolved independently and several times within each group. In general, "true" autotomy occurs along a weakened portion, called the breakage plane, to shed body parts. Although we observed no such specific areas of weakness on the hook-like setae, exuvial autotomy, if it exists in these beetles, may not require breakage planes because the anchoring setae of such small beetle larvae may be fragile enough and easily broken, either by moving through the environment or under attack by potential predators. Actually, among the larvae we examined, some larvae with fractured hook-like setae were observed.