Partners in crime: genetic collaborator may influence severity of the rare disease, NGLY1 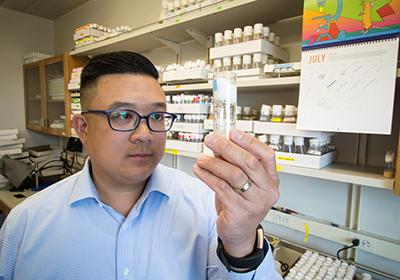 In 2012, four-year-old Bertrand Might became the first-ever patient diagnosed with a rare genetic disorder called N-glycanase (NGLY1) deficiency. The discovery of this condition and Bertrand's diagnosis allowed doctors to look for other children with the same genetic defect. Since then, more than 60 additional patients have been found. The disease affects every system of the body and is characterized by low muscle tone, seizures, developmental delays, and an inability to produce tears.

Sadly, Bertrand passed away in October at the age of 12. Although his life was cut short, his legacy will benefit children around the world. Through their website, NGLY1.org, Bertrand's parents collect and share a wealth of research and family stories to help educate and inform the community. As more patients have been identified, it's become apparent that even though the same gene is deactivated in all of them, their symptoms and severity of disease vary widely.

Geneticist Clement Chow, Ph.D., assistant professor in the Department of Human Genetics at University of Utah Health, studies NGLY1 deficiency in the fruit fly, Drosophila melanogaster. To understand how the disease symptoms can vary so much, he and his colleagues are hunting for other genes that interact with NGLY1. In a paper published in eLife, Chow reports that his lab has found that one of these interacting genes moderates disease severity. The gene, called ncc69, has a human counterpart called NKCC1. Their experiments showed that NGLY1 chemically modifies NKCC1. Studying this interaction could help illuminate how NGLY1 deficiency affects the body.

Common diseases, such as heart disease or cancer, arise from a combination of many genetic and environmental causes, while rare diseases are more likely caused by a single gene. But every single-gene disease occurs against the individual patient's unique genetic backdrop, a patchwork of different genetic variants inherited from both parents. Children with NGLY1 deficiency start experiencing serious symptoms early in life, suggesting that environmental differences, such as diet, aren't a key factor. More likely, differences in their other genes are influencing the clinical course of the disease.

To search for genes that work together with NGLY1, the researchers needed to use flies with varied genetic backgrounds. Laboratory flies, however, are inbred to be genetically identical. To approximate the natural genetic diversity found in humans, Chow turned to a resource called the Drosophila Genetic Reference Panel. It's a collection of 200 different fruit fly lines, all bred from the same original population--but each one is just a bit different from the others.

"It's like if you sampled 200 Northern Europeans," Chow says. "They'd share lots of genetic variants, but lots of differences as well."

In each strain of flies, Chow and his research team swapped in a non-working copy of the NGLY1 gene, then looked for differences in survival. Strikingly, the flies' genetic background heavily influenced how long the young flies could survive without NGLY1.

The researchers analyzed the genes that varied among the flies that survived and those that died, coming up with a list of candidate genes that could be playing a role. They began studying one of these candidates, NKCC1, and soon switched from flies to mice.

"When we hit a wall in what we could do with flies, we decided to turn to the mouse model to try to fully characterize what NKCC1 and NGLY1 are doing to interact with each other," Chow says.

In cells from mice, the researchers discovered that the NKCC1 protein assumes its correct shape through glycosylation, a chemical process that tacks sugar molecules onto the protein. NGLY1 acts to remove these sugar molecules from specific targets.

In the absence of NGLY1, Chow found, NKCC1 was overloaded with extra sugars, reducing activity in the cell by 50%. Without NGLY1, NKCC1 can't do its job properly, which is to move fluids and ions out of the cell.

While application to human disease is still a long way off, the role of NKCC1 makes sense in terms of the symptoms seen in NGLY1 patients. One of the hallmark features of NGLY1 deficiency is the inability to make tears, sweat, and saliva. It turns out that patients who lack NKCC1 also have this symptom. NKCC1 is active in salivary glands, sweat glands, and tear ducts, which supports the idea that the molecule plays a role in causing the symptoms.

"This was all discovered through a genetic screen in Drosophila," Chow says. "This really speaks to the power of using simpler model organisms, especially for rare diseases, where you want to get results faster."