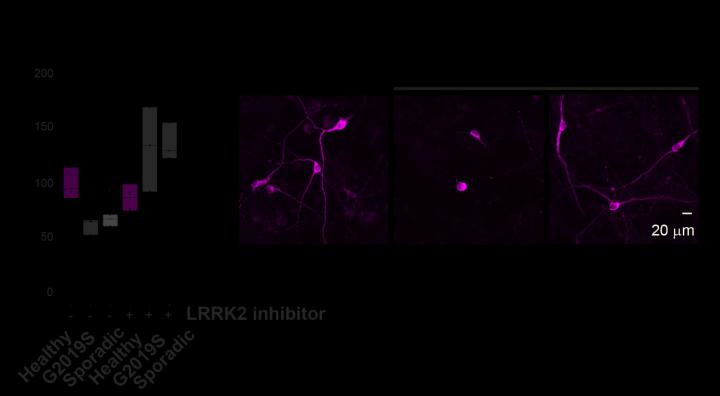 IMAGE: A. The first panel shows the relative levels of protein synthesis in cells from healthy donors compared to those from two classes of Parkinson's patients; those carrying a gain of function...

In a recently published study, researchers from the Turku Bioscience Centre at the University of Turku and Åbo Akademi University in Finland monitored the production of new proteins as they were produced by the cells' protein building machinery, the ribosome.

"These results are interesting because LRRK2 is thought to contribute to Parkinson's disease, but precisely how, it is not yet known," says lead author Eleanor Coffey, the lead author of the article.

"Although drug programmes developing LRRK2 inhibitors for treating Parkinson's are already underway, it is still important to understand what LRRK2 is doing in cells that may contribute to the disease," adds first author of the study Prasannakumar Deshpande.

When the researchers added LRRK2 inhibitor drugs to the patient samples, they found that the synthesis of new proteins returned to control levels. They next used the pesticide rotenone, exposure to which induces Parkinson's-like symptoms in humans, to model Parkinson's disease in rodent brain cells. They found that rotenone repressed protein synthesis and caused the axons of dopamine-producing nerve cells, which also die in Parkinson's, to waste away.

Both effects were reversed when treated with LRRK2 inhibitor drugs. Moreover, in mice lacking the gene for LRRK2, protein synthesis was increased in nerve cells.

"These data identify a critical role for LRRK2 in the control of the process that converts genetic code into protein," tells Coffey.

To understand how LRRK2 reduced protein synthesis, researchers examined a brain region called the substantia nigra, which is affected in Parkinson's disease. In rats exposed to rotenone, they found that controllers of protein synthesis acquired "phosphate marks" which signal protein synthesis to stop. One such mark was particularly prominent in patient skin cells. The authors were able to show that LRRK2 inhibitor drug reversed these marks and allowed the cell to resume making new proteins.

Reduced protein synthesis might be an indicator for Parkinson's disease

"It is significant in this study that we found no evidence of decreased protein synthesis in individuals with multiple system atrophy, a movement disorder that is symptomatically difficult to distinguish from Parkinson's disease, but with distinct etiology and prognosis," Coffey explains.

This suggests that a reduction in the synthesis of certain proteins are specific to Parkinson's disease and could be used as a biomarker readout. Also, as patients aged and the disease progressed, the repression of protein synthesis was more notable, adds Deshpande. This did not happen in healthy individuals. Analysing the repression of the synthesis of certain proteins will provide a means to monitor disease progression.

The research group is now examining hundreds of patient samples to determine which group of downregulated proteins shows the best discriminating power to identify Parkinson's disease and if it can be used to detect Parkinson's before motor symptoms appear.

"If such a signature can be found, it could help improve clinical trial outcome by providing a tool for patient stratification. If successful, this would help accelerate the development of better treatments for Parkinson's disease patients," summarises Coffey.

The study was carried out on samples from individuals from Finland and the United States. The work was done in collaboration with Drs Valtteri Kaasinen and Sirkku Peltonen at Turku University Hospital and Prof. Peter James at Åbo Akademi University.