Oxygen shaped the evolution of the eye 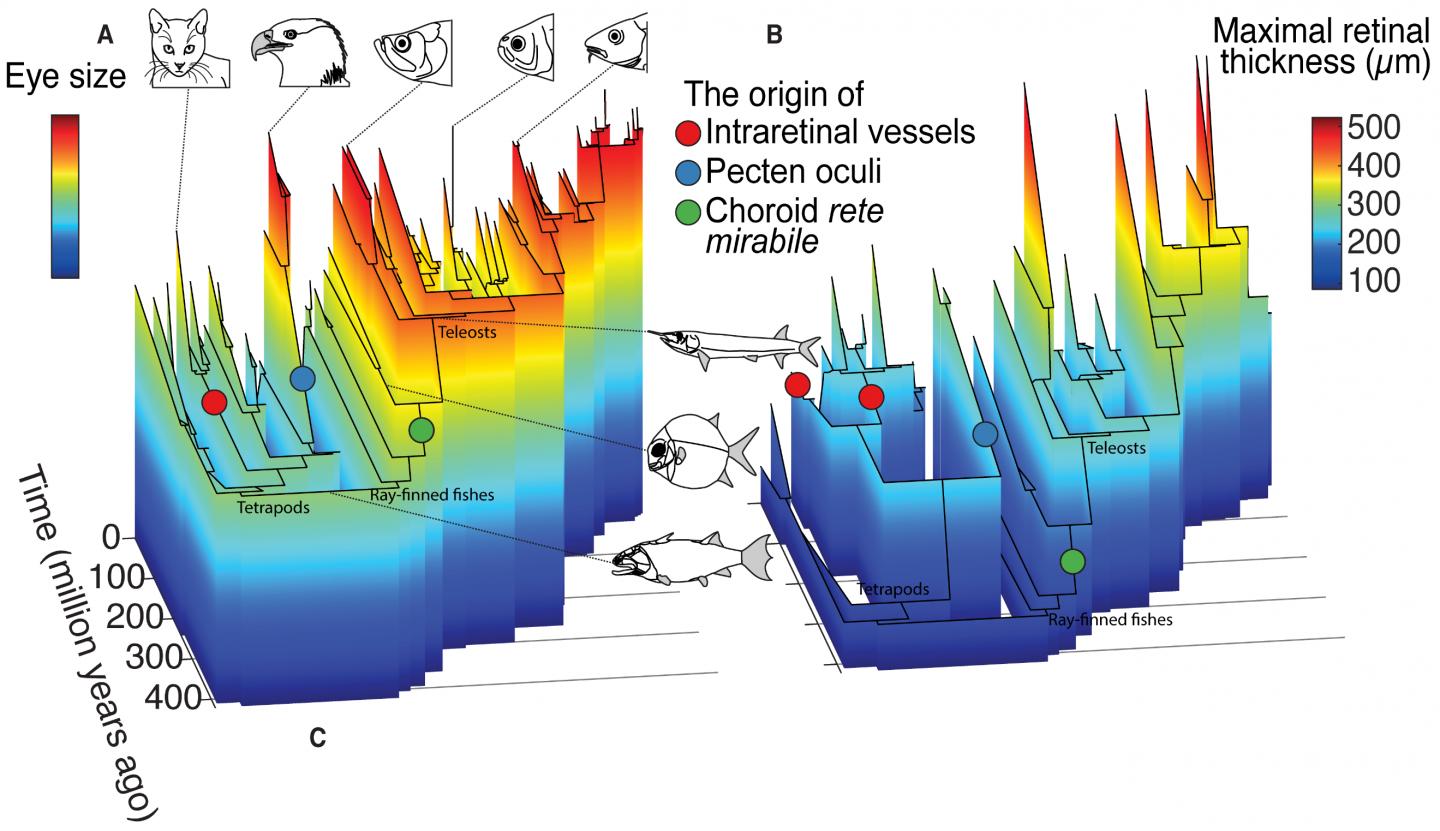 Convergent origins of new mechanisms to supply oxygen to the retina were directly linked to concurrent enhancements in the functional anatomy of the eye.

In his "On the Origin of Species", Darwin used the complexity of the eye to argue his theory of natural selection and the eye has continued to fascinate and trouble evolutionary biologists ever since.

In a paper published today in eLife, researchers from Aarhus University teamed up with scientists from eight international institutions to explore the physiological requirements for the evolution of improved eyesight.

They argue that the evolution of high-acuity vision in ancestral animals was constrained by the ability to deliver sufficient amounts of oxygen to cells in the retina. Their study uncovered a fascinating pattern of mechanisms to improve retinal oxygen supply capacity that evolved in concert with enhanced retinal morphology to improve vision. The model fits across all bony vertebrates from fish through to birds and mammals. These findings add an additional component to our understanding of the evolution eye, which has fascinated and troubled evolutionary biologists for centuries.

The rises and falls of retinal oxygen supply

The study took advantage of the diversity in the physiology and anatomy among eyes from 87 animal species, including fishes, amphibians and mammals. By placing these species on the tree of life, the authors unravelled the evolutionary history of the eye from a 425 million-year-old extinct ancestor of modern vertebrates to current day animals. They identified three distinct physiological mechanisms for retinal oxygen supply that are always associated with improved vision. Thus, in fishes, mutations in haemoglobin were associated with the ability to deliver oxygen to the retina at exceptional high oxygen partial pressures to overcome the significant diffusion distance to the retinal cells.

The authors show that the origin of this mechanism around 280 million years ago was associated with a dramatic increase in eye size and retinal thickness that directly links to improved light sensitivity and spatial resolution. This mechanism in hemoglobin was subsequently lost several times, possibly to avoid oxidative damage and gas bubble formation in the eye.

The authors show that increased reliance on vision in mammals was associated with the evolution of capillary beds inside the retina despite the potential trade-off to visual acuity imposed by the bending of light by red blood cells.

Retinal capillaries in mammals originated around 100 million years ago when dinosaurs evolved endothermy. Endothermy allowed these Mesozoic dinosaurs to hunt at night, which forced the previously nocturnal mammals into a diurnal lifestyle with an increased reliance of vision.

Overall, this analysis shows that the functional morphology of the eye has changed dynamically throughout animal evolution. It shows that eye morphology goes hand in hand with parallel changes in retinal oxygen supply, and they are likely driven by different tradeoffs to retinal oxygen supply. These tradeoffs appear acceptable in place of the improved visual acuity available when the thickness of the retina was allowed to increase.

Overall, this study shows that adaptations to ensure oxygen delivery to the retina was a physiological prerequisite for the functional evolution of the eye.