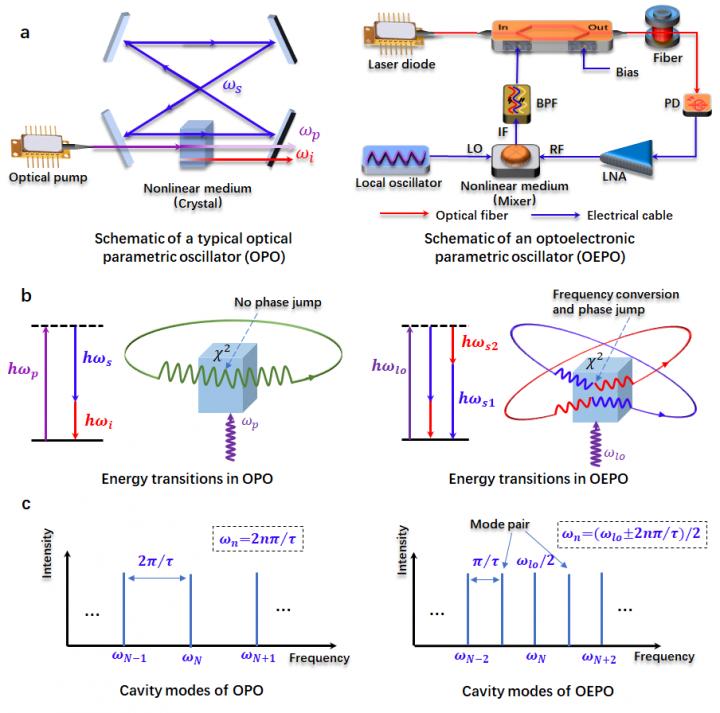 Parametric oscillators are a driven harmonic oscillator that based on nonlinear process in a resonant cavity, which are widely used in various areas of physics. In the past, parametric oscillators have been designed in pure optical and pure electrical domain, i.e., an optical parametric oscillator (OPO) and a varactor diode, respectively. Particularly, the OPO has been widely investigated in recent years since it greatly extends the operating frequency of laser by utilizing the second-order or third-order nonlinearity, noted that the operating frequency range of the ordinary laser is limited to the simulated atomic energy level. On the other hand, the oscillation in both the OPO and electrical parametric oscillator is a delay-controlled operation, which means that a steady oscillation is confined by the cavity delay since the signal must repeat itself after each round-trip. This operation leads difficulty in frequency tuning, and the frequency tuning is discrete with a minimum tuning step determined by the cavity delay.

A pair of oscillation modes is converted into each other in the nonlinear medium by a local oscillator in the proposed OEPO. The sum phase of each mode pair is locked by the local oscillator, which ensures stable multimode oscillation that is difficult to realize in conventional oscillators. Moreover, owing to the unique energy transition process in the optoelectronic cavity, frequency of the single-mode oscillation can be independent of the cavity delay. Continuous frequency tuning is achieved without the need for modification of the cavity delay. These scientists summarize the difference between the OEPO and traditional oscillators:

"Owing to the unique phase-controlled oscillation in the proposed OEPO, stable and tuneable multimode oscillation is easy to realize. The OEPO can therefore be applied in scenarios requiring stable, wideband and complex microwave waveforms. By increasing the cavity length of the OEPO, the mode spacing of the optoelectronic cavity can be as small as several kHz, which would allow many densely distributed modes to oscillate in the cavity simultaneously. Oscillator-based computation can benefit from such a large mode number. Furthermore, when the OEPO operates in single-mode, the parametric frequency conversion actually works as a phase conjugate operation. Therefore, the OEPO can be used for phase-stable RF transfer since the phase error resulting from cavity turbulence can be auto-aligned." the scientists forecast.