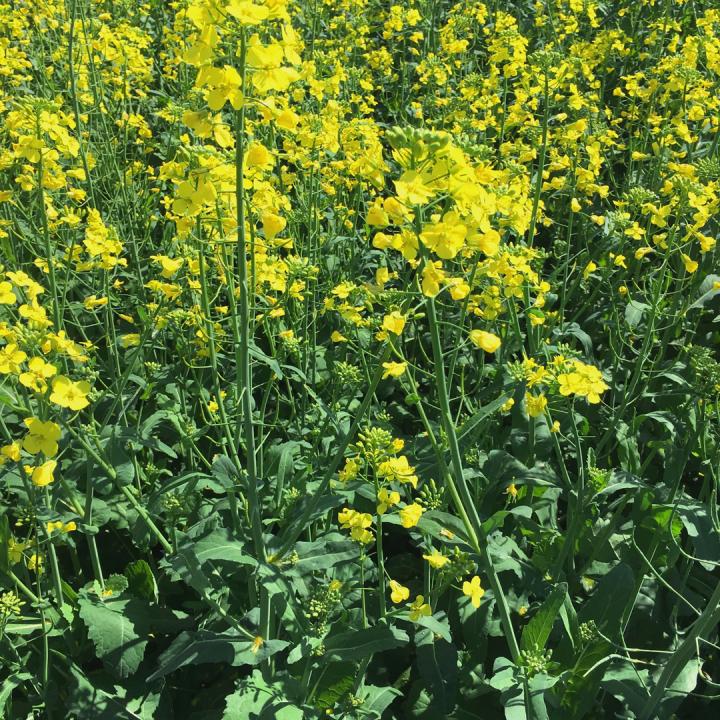 IMAGE: Canola is a crop from which seeds are commonly harvested to create canola oil and meal. Canola is in the family of Brassica plants.

Fertilizer is used worldwide in farming. It's used to give plants a boost, increasing yield and ultimately farmers' profits.

But, as the old adage goes: the dose makes the poison. Similar effects are seen in over-the-counter medicines. They need to take the right dose, at the right intervals, to be safe and effective. Fertilizer works the same way.

In particular, the rate and source of the fertilizer can make the difference, especially in a method called banding. It's a method where the fertilizer is placed in a band in the soil below the seed. While banding has many advantages, it can also cause damage to the plant roots if used incorrectly.

"While banding below and to the side is the recommended practice, banding directly below the seed continues to be a common practice used in dryland systems," says Isaac Madsen. "It can reduce the number of passes across the field required in a growing season. Banding also allows you to put on all or most of your fertilizer at one time. This generally causes less disturbance in a minimum or no-till system." Madsen is a postdoctoral research associate at Washington State University.

Researchers like Madsen are trying to find the ideal rate and source that will help the plants without damaging the roots. Madsen and his team studied canola in particular. New imaging and analysis techniques allowed them to see canola roots interacting with fertilizer in a way never previously done.

"In this study, we imaged canola roots growing into a fertilizer band and measured the damage to the canola tap root," Madsen explains. "Using scanner-based rhizoboxes (glass boxes filled with soil), we were able to collect a series of root images over time. This allowed us to look at the effect of fertilizer rate and source on the seedling root systems."

The reason the root damage is of such concern in canola is because it has a long tap root. These larger roots are especially affected by fertilizer. If the tap root is damaged, the plant can't properly take up nutrients and water.

The team's end goal was to determine what is called a dose-response curve. This will help farmers better apply their fertilizer and know if it will harm their crops' roots or not. They used the data they collected from the root images to develop these curves for the different fertilizer sources.

"A dose-response curve helps determine the amount or dose of a substance that will result in a specific response," Madsen says. "In this instance we modeled tap root survival, depth, and distance from fertilizer band."

They used three sources of nitrogen fertilizer in their study: urea, ammonium sulfate, and urea ammonium nitrate. Each one reacts differently in the soil, and the researchers thought they would cause different amounts of damage to the roots.

Madsen says their results show that banding urea ammonium nitrate rather than urea, along with keeping the rates low, is the best option for canola. He adds that this research is important for canola growers in the Pacific Northwest area. It helps establish guidelines for them to apply nitrogen fertilizers.

"I think banding is, indeed, frequently the best practice," says Madsen. "But we need to be careful with our rates and sources. Banding of fertilizers will not cause problems as long as the rates used are low enough and the sources used are safe enough. My research goal is to develop rate and source guidelines that growers can use to minimize damage and maximize fertility."

Madsen says the imaging techniques used in this study were unique and very useful. Getting a glimpse at the roots can be valuable. It allows something usually hidden beneath the soil and important for plant health to be studied in real time.