Oncotarget: Sirolimus-eluting stents -- opposite in vitro effects on the clonogenic cell potential 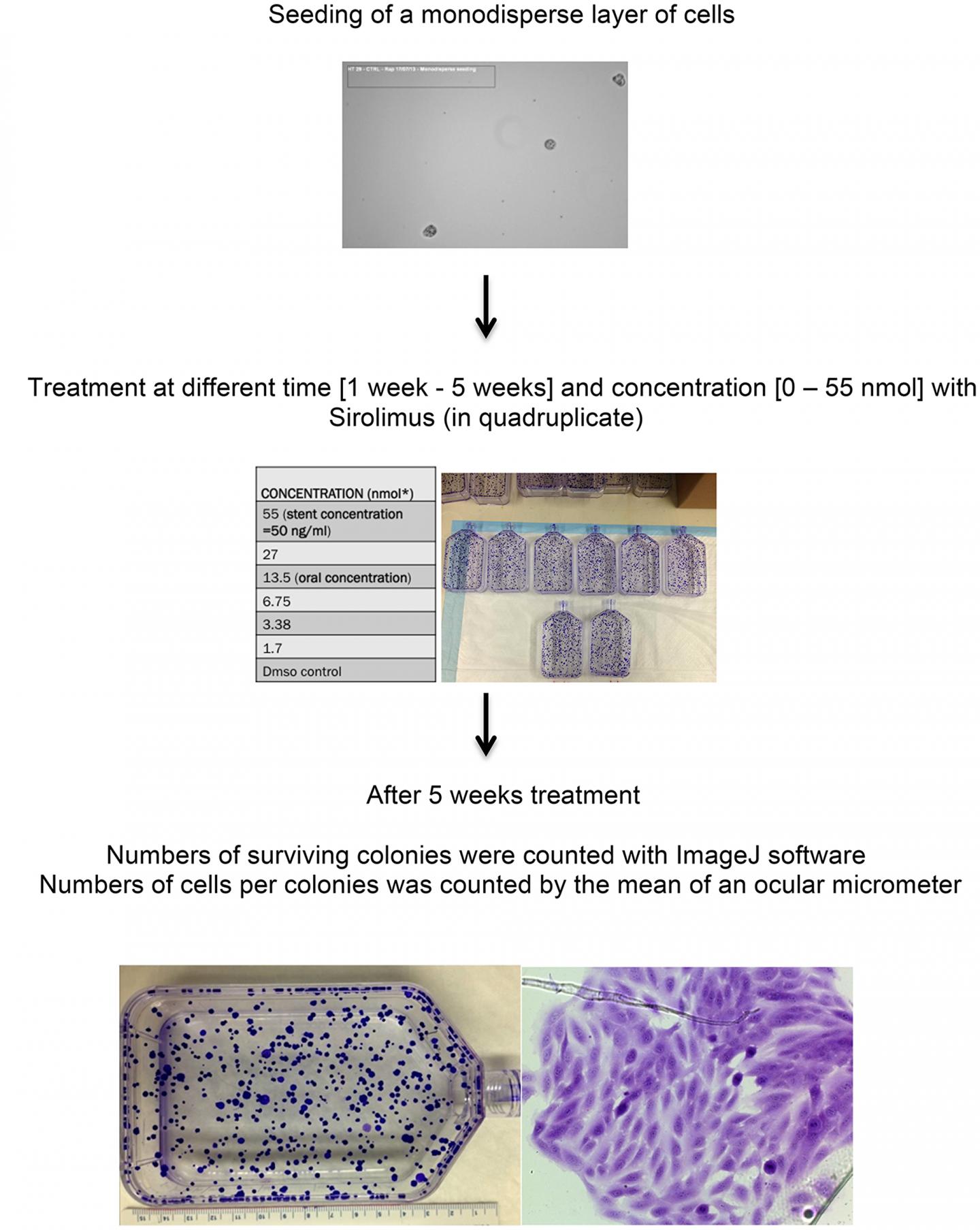 IMAGE: Experiment design for clonal assay in T75 flasks in cell lines treated with sirolimus at different time and concentration. Experiments parameters used were: - synchronized colonies, no use of CO2,...

The cover for issue 31 of Oncotarget features Figure 4, "Concentration dose-response curves of sirolimus effect [55 nM–1 nM] on the number of cells per surviving colony in U2OS cell line after 2 weeks exposure," by Vasuri, et al. which reported that the authors evaluated the long-term effects of sirolimus on three different cell in vitro models, cultured in physiological conditions mimicking sirolimus-eluted stent, in order to clarify the effectiveness of sirolimus in blocking cell proliferation and survival.

Three cell lines were selected and growth in 10 ml of Minimum Essential Medium for 5 weeks with serial dilutions of sirolimus.

As a result, the number of WPMY-1 surviving colonies increased in a dose-dependent manner when treated with sirolimus, while the number of U2OS colonies progressively decreased.

In conclusion sirolimus showed the well-known cytostatic effect, but with an effect on clonogenic potential different among the different cell types.

Dr. Gianandrea Pasquinelli from The Bologna University said, "Rapamycin (sirolimus) is a widely used cytostatic drug blocking the cell cycle in the phase G1/S through the inhibition of the mammalian target of Rapamycin (mTOR) pathway, that has found several clinical applications, from immunosuppression in diabetes and organ transplantation to cancer therapy and drug-eluting stents (DES)"

Beside to its cytostatic activity, sirolimus was also discovered to protect normal human oral keratinocytes from apoptosis by activating autophagy, and to act as a basal stem cell keratinocyte-protecting drug in irradiated mice.

Sirolimus seems to block the proliferation and the migration of vascular smooth muscle cells, but we lack information concerning the effects on other cells composing atherosclerotic plaques.

The aim of the present paper is to evaluate the long-term effects of sirolimus, rather than short-term cell survival, on three different cell in vitro models, cultured in Minimum Essential Medium, which simulates physiological conditions (w/o CO2 and glucose, in order to clarify the effectiveness of sirolimus in blocking cell proliferation and survival.

The Pasquinelli Research Team concluded in their Oncotarget Research Paper that the plaque typology and the different cell composition of the plaque, e. g., the presence of inflammatory cells, angiogenesis, prevalence of fibrosis, presence of osteogenic progenitors, may influence the response to sirolimus.

"The presence of inflammatory cells, angiogenesis, prevalence of fibrosis, presence of osteogenic progenitors, may influence the response to sirolimus"

Moreover, it is known that the clonal capacity varies between cells and we should consider this matter when evaluating the effectiveness of eluted stent.

Finally, additional mechanisms can have a role, such as amitotic cell division.

These mechanisms were also observed in human atherogenesis and could be fundamental to evaluate the in vivo effect of sirolimus too.