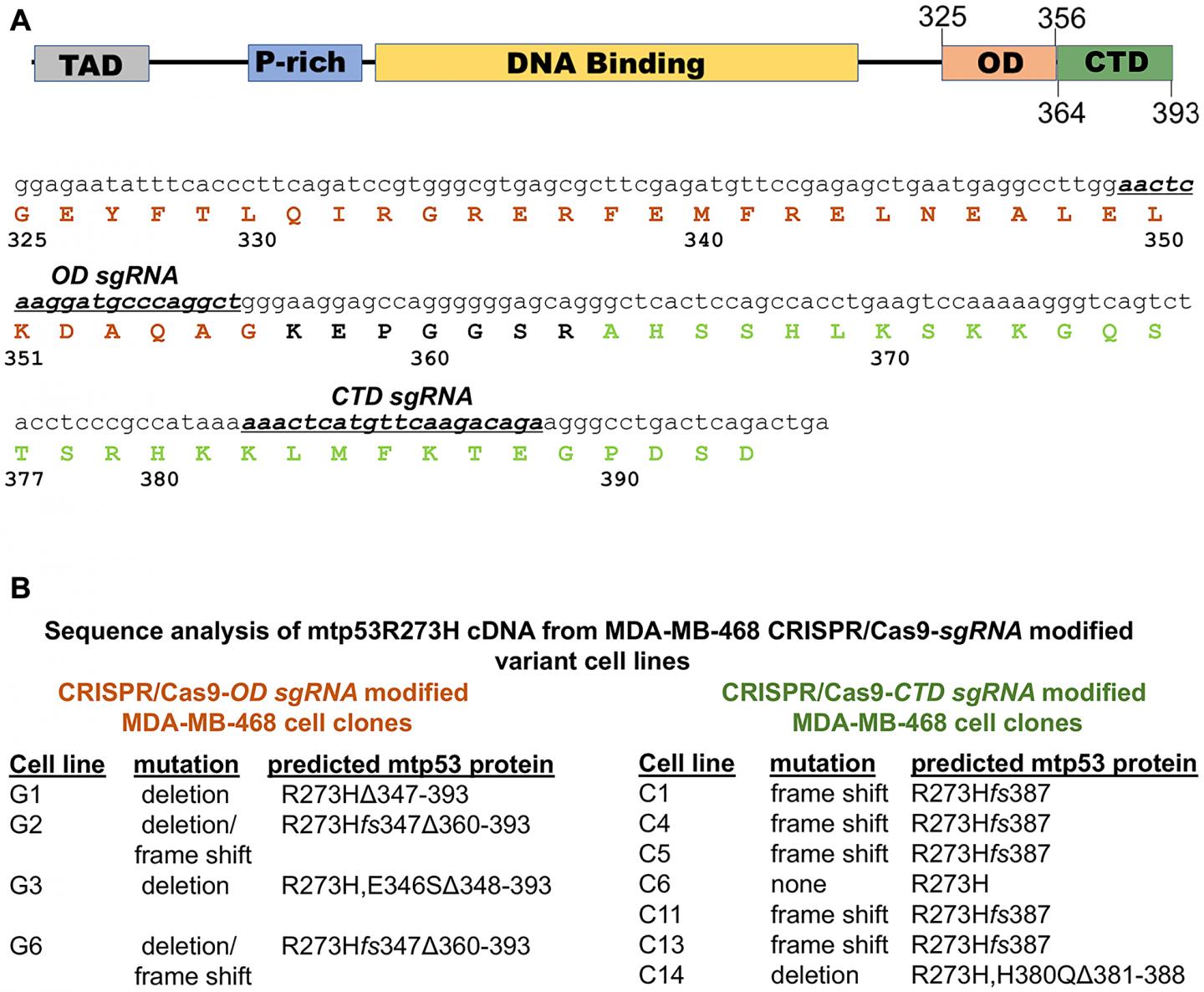 image: Domain architecture of p53 and nomenclature of clones generated via CRISPR-Cas9. (A) Highlights the domain architecture of p53 with emphasis on the sgRNA designed to target the oligomerization (OD) and C-terminal domain (CTD) of mtp53. (B) CRISPR-Cas9 was used to generate clones with either OD or CTD mutations. Clones were selected with FACS sorting of eGFP positive cells. Selected clones were named based on the region and type of mutation that resulted.

Oncotarget published "Frame-shift mediated reduction of gain-of-function p53 R273H and deletion of the R273H C-terminus in breast cancer cells result in replication-stress sensitivity" which reported that these authors recently documented that gain-of-function mutant p53 R273H in triple negative breast cancer cells interacts with replicating DNA and PARP1. The missense R273H GOF mtp53 has a mutated central DNA binding domain that renders it unable to bind specifically to DNA, but maintains the capacity to interact tightly with chromatin.

Both the C-terminal domain and oligomerization domain of GOF mtp53 proteins are intact and it is unclear whether these regions of mtp53 are responsible for chromatin-based DNA replication activities.

The mtp53 R273HΔ347-393 existed exclusively as monomers and disrupted the chromatin interaction of mtp53 R273H.

Taken together these Oncotarget findings show that the CTD and OD domains of mtp53 R273H play critical roles in mutant p53 GOF that pertain to processes associated with DNA replication.

Taken together these Oncotarget findings show that the CTD and OD domains of mtp53 R273H play critical roles in mutant p53 GOF that pertain to processes associated with DNA replication.

While tumor-derived missense mtp53 proteins have altered functions they contain the two N-terminal transactivation domains, followed by a proline rich domain, an altered central DNA binding domain, and the oligomerization domain and the C-terminal regulatory domain.

Herein they further examine the ability of mtp53 R273H, and its OD and CTD regions, to influence cell proliferation, DNA replication, and cell cycle progression of breast cancer cells.

The choice to investigate a potential role for the OD and CTD domains within the context of the mtp53 R273H allele was two-fold:

They delineated the above GOF pathway in this background and in parallel with the studies reported, worked to generate more tools to elucidate the role of each domain in mtp53 GOF activity;
Their pursuit of a genetic approach using CRISPR-Cas9 technology to create specific alterations within each domain necessitated that we focus first on one mtp53 R273H expressing-cell line.

They saw that a frameshift mutation in C-terminal end of mtp53 reduced stable mtp53 R273H protein levels compared to the parental MDA-MB-468 cells, reduced cell proliferation, and reduced the chromatin association of replication proteins that mirrored their slow progression through S-phase.

The Bargonetti Research Team concluded in their Oncotarget Research Output that their current studies do not point to a specific function executed by the OD and CTD domains in response to thymidine; however, they can show that their loss does not impact replisome assembly at the onset of S-phase as measured by PCNA chromatin loading and they will address this finding in the future.

Thus, OD and CTD domain function(s) correlate with events post S-phase entry, in contrast with that function conferred by other p53 domain(s) deficient in the mtp53fs387 cell line, whose loss impedes S-phase entry. Although currently the authors are unable to articulate the precise roles of these distinct regions of p53 in response to thymidine, their studies suggest that they may function at temporally distinct stages of S-phase.