Odors as navigational cues for pigeons 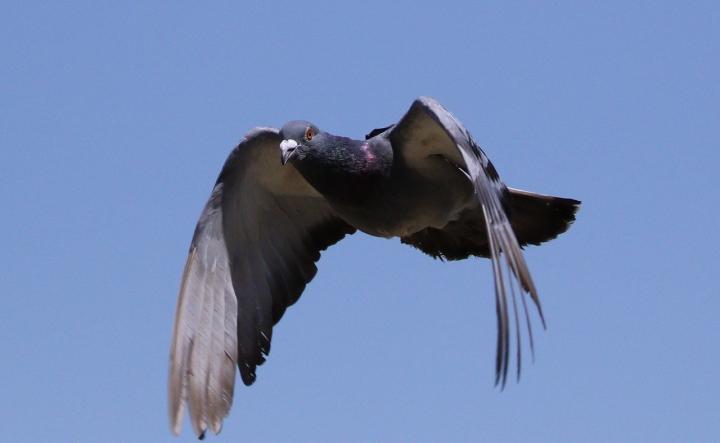 IMAGE: Scientists were able to identify volatile organic compounds that can be used by carrier pigeons for olfactory navigation.

Odors are known to be essential for navigation during homeward orientation and migration of some bird species. Yet little was known about their chemical composition. An international team has now identified volatile organic compounds that can be used for olfactory navigation by homing pigeons and proved the existence of suitable regional chemical gradients in the air on a landscape-scale in Tuscany.

Many bird species can find their way home even after being brought to remote or unfamiliar locations. Over 40 years of research on homing pigeons have shown that environmental odors play a crucial role in this process. Yet the chemical identity of these odors has remained a mystery. An international team of scientists from the Max Planck Institutes for Chemistry (Mainz) and of Animal Behavior (Radolfzell), and the Universities of Konstanz, Pisa and Mainz has now identified potential chemical navigational cues that could be used by homing pigeons. Based on the collected data, the researchers were also able to create regional olfactory maps for marine emissions, biogenic compounds, and anthropogenic mixed air and to establish the existence of regional navigable chemical gradients in the air.

During the scientific mission, which took place in 2017 and 2018 in the Italian region of Tuscany, the researchers measured a suite of airborne volatile organic compounds (VOCs) over a period of months at the pigeon's home aviary. Some of these compounds are emitted by trees, the pine fragrance one smells during a walk in the forest. Other pungent natural emissions come from the sea, while still further VOCs can be emitted from industry. The measurements enabled regional maps to be constructed connecting chemicals with wind direction and speed. Additional measurements were taken in selected regional forest environments and by air using an ultralight plane flying at 180 meters - the average altitude of flying pigeon. The scientists merged the information they had gathered during the field campaigns with GPS tracks obtained from released birds. Thus, they generated multiple regional, horizontal and vertical spatial chemical gradients that can form the basis of an olfactory map.

Olfactory maps based on environmental odors

"Ornithologists from Germany and Italy have shown in more than 40 years of experiments, that pigeons use airborne odors to navigate home," explains Nora Zannoni, post-doctoral researcher at Max Planck Institute for Chemistry and the study's first author. Those results have shown that pigeons construct an olfactory map based on the distribution of environmental odors they have perceived over several months at the home aviary. This knowledge is then used as a compass at the point of release to return back home from unfamiliar sites. "By proving the existence of regional chemical gradients in the air around the experimental site we provide support for the olfactory navigation hypothesis and with atmospheric measurements we have found which chemicals can be used for navigation," adds Zannoni. Some compounds come from forested areas (monoterpenes) or the sea (DMS) while others are emitted from cities and industrial complexes (trimethylbenzene), spots that act like chemical lighthouses.

One of the biggest challenges during this research campaign was its multidisciplinary character. "We had to combine the different approaches of several scientific disciplines - atmospheric and analytical chemistry, ornithology and animal behavior, computer science and statistics," says Martin Wikelski, managing director at the Max Planck Institute of Animal Behavior.

"It's amazing really," adds Jonathan Williams the project leader at the MPIC's Atmospheric Chemistry Department in Mainz. "We uncovered these chemical gradients using several tones of ultrasensitive scientific equipment, but the same complex odor information can be analyzed and converted to a regional map by a 400-gram pigeon."