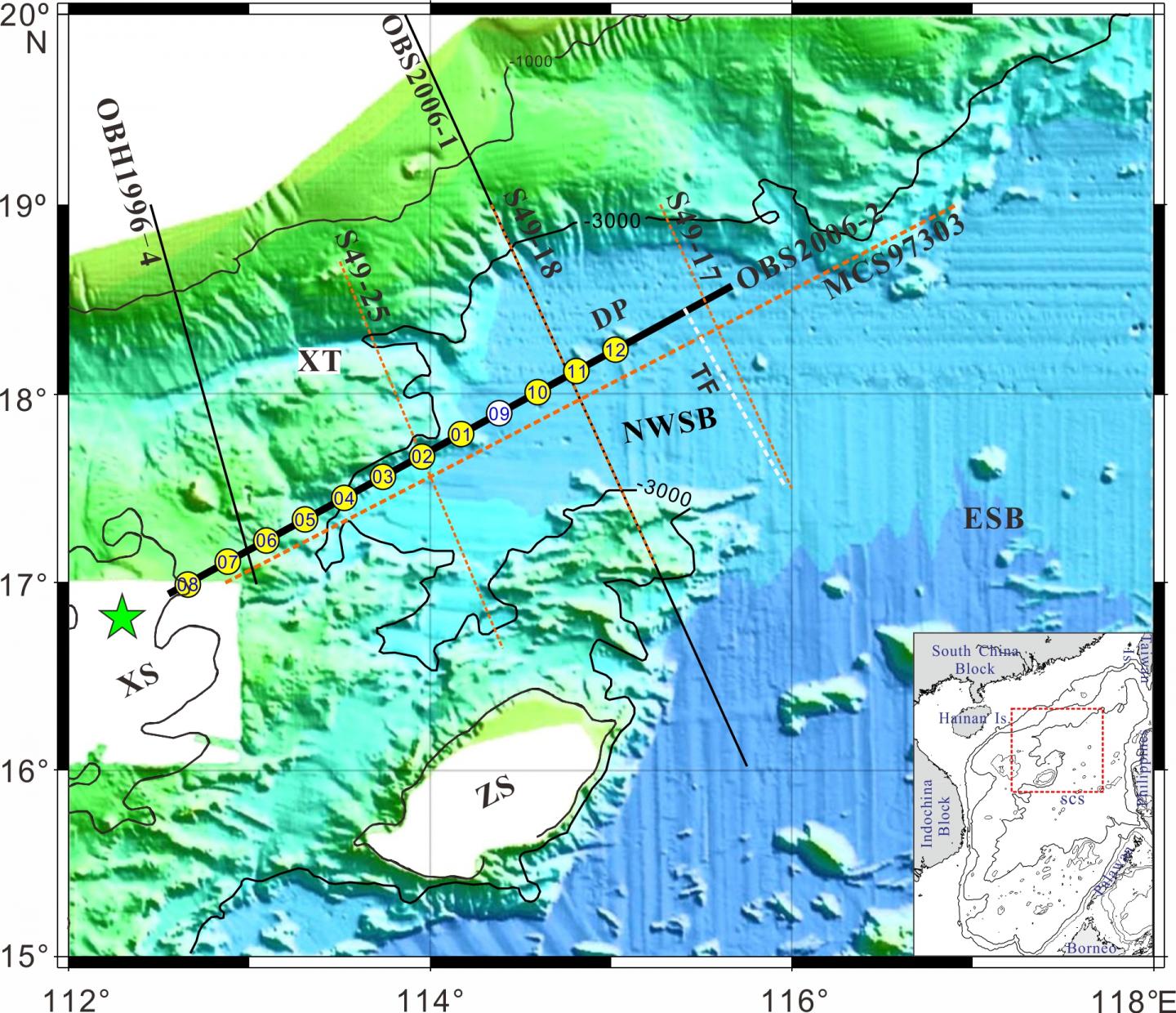 IMAGE: Bathymetry map and location of OBS2006-2 seismic profile in the Northwest Sub-basin of the SCS

The Northwest Sub-basin (NWSB) is an indispensable and essential part of the South China Sea (SCS) since it is one of three sub-basins of the SCS. In this paper, researchers used 11 OBSs' data along the profile OBS2006-2 (Fig. 1) by means of the latest data converting programs, elaborated the velocity structures of extinct spreading ridge by the employ of forward/inverse modeling software (RayInvr and Tomo2d), and then clarified the formation mechanism of the Double-peak seamount in the NWSB.

The paper titled "Crustal velocity structure of the Northwest Sub-basin of the South China Sea based on seismic data reprocessing" is published in the Science China: Earth Sciences, which has been finished by Prof. Minghui Zhao's research team at the Key Laboratory of Ocean and Marginal Sea Geology, South China Sea Institute of Oceanology, Chinese Academy of Sciences, and the first author is Dr. Qiang Wang.

The SCS is the mother sea of the China. As one of the largest marginal seas around the western Pacific, the SCS acts as the first priority of scientific breakthrough for China's geoscience research from lands to oceans (Wang et al., 2009, 2018). The SCS can be divided into the Northwest Sub-basin, Southwest Sub-basin, and East Sub-basin based on bathymetric topography and the characteristics of the magnetic anomalies (Yao, 1996; Sun et al., 2019). The short spreading period (~7 Ma) of the NWSB (Briais et al., 1993; Ding et al., 2009; Ding et al., 2011), and the limited scope of the basin, resulting in multiple solutions for the recognition of magnetic anomalies; The relatively thicker sedimentary strata covered the submarine tectonics; Besides, intensive post-spreading magmatism transformed the pre-existing submarine tectonics; The above factors bring challenges to the understanding of the crustal structure and the division of the continent-ocean transition (COT) of the NWSB.

The ocean bottom seismometer (OBS)deep seismic survey is one of the most effective and mature methods to obtain the lithospheric velocity structures. The velocity structures along the 2-D wide-angle reflection/refraction seismic profile OBS2006-2 (Fig. 1) elaborates the characteristics of extinct spreading ridge in the NWSB. The sedimentary basement changes greatly; the depth of the Moho (23.5-11.8 km) and crustal thickness (20.5-6.5 km) systematically changes from continental crust of the Xisha Block to the oceanic crust within the NWSB. Combined with gravity and magnetic anomaly data, the location and geophysical characteristics of the COT in the NWSB is determined (Fig. 2), with a width of ~20 km, and the Moho depth decreases from 15 km to 11 km. A high velocity layer (HVL, 7.2-7.4 km s-1) exists at the bottom of the crust at the location where the sharp lateral transition of the continental crust to the oceanic crust occurs corresponding to a ~4 km decrease in crustal thickness (6-10 km).

The HVL may be related to in-situ mantle serpentinization based on previous results of magnetic anomaly analysis (Li et al., 2010; Li and Song, 2012); or it may be linked with the lower crust magma underplating due to the abrupt increase of magmatic supply at COT, which results in the rupture of the continental crust and the following onset of seafloor spreading (Huismans and Beaumont, 2011). The 40Ar/39Ar dating results of two trachyte samples (~23 Ma) indicating that the Double-peak Seamount is formed by magmatic intrusion ~2 Myr after the cessation of seafloor spreading in the NWSB. The crustal thickness beneath the Double-peak seamount is ~9 km, accompanying the low-velocity anomalies in the upper mantle. ~2 Myr after the cessation of seafloor spreading in the NWSB, the residual magma upwells due to buoyancy-driven decompression melting and intrudes into the bottom of the crust and leads to higher heat flow. Then the molten magma erupts to the seafloor along the pre-existing tectonic weak zone (e.g., extinct spreading ridge, transform fault) to form the Double-peak Seamount, which showing the tectono-magmatic processes.

This research enriches the deep crustal structure of the NWSB. It does not only accumulate important practical experiences for the OBS cruises and data processing, but also deepen the knowledge of magmatic activities, the characteristics of the COT and their dynamic mechanisms.