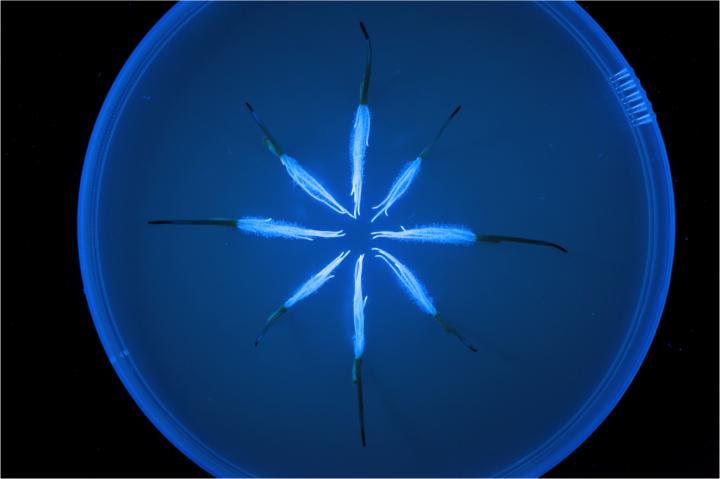 IMAGE: Researchers have identified the critical last pieces of a genetic defence system that gives oats resistance to soil pathogens.

Researchers have identified the critical last pieces of a genetic defence system that gives oats resistance to soil pathogens.

The discovery opens significant opportunities for scientists and breeders to introduce versions of this defence mechanism into other crops.

It is an important milestone in research into avenacins, defensive antimicrobial compounds produced in the roots of oats. These were first identified more than 70 years ago and belong to the triterpene glycoside family of natural products which have diverse industrial and agricultural applications.

Avenacins give oats resistance against soil pathogens including Take-all, a notorious disease that causes major losses in wheat and barley.

Professor Anne Osbourn of the John Innes Centre and an author of the study said: "When we started 20 years ago we didn't have any of the genetic pieces in this avenacin defence pathway. Now we have found the last critical steps we have the potential to engineer it into other crops.

"Wheat, other cereals and grasses are not good at making antimicrobial compounds. Oat, on the other hand, is a prime example of a super-fit plant that has not been extensively bred and has disease resistance which could benefit more cultivated crops."

In this study, which appears in the journal PNAS, researchers used a range of genomic analysis techniques to identify the enzymes that catalyse this process.

They discovered the final component in this sugar chain was added by an unexpected class of enzyme. Furthermore, the sugar was added in the cell vacuole not the cytosol where most glycosylation steps occur in the avenacin pathway.

"This transglucosidase enzyme elucidated in this study belongs to a large family of enzymes not generally thought of as providing this function," explains first author Dr Anastasia Orme.

"Understanding the contribution of this family opens up a whole new sphere of carbohydrate biology that is relevant to natural products and hence to drugs and other valuable compounds."

The study was carried out in collaboration with Professor Bin Han as part of the Centre of Excellence for Plant and Microbial Science (CEPAMS) a partnership between the Chinese Academy of Sciences and the John Innes Centre.

One of the potential benefits of greater understanding this large family may be in biosynthesis of traditional Chinese medicine using resources such as the plant transient expression system technology developed by the John Innes Centre.