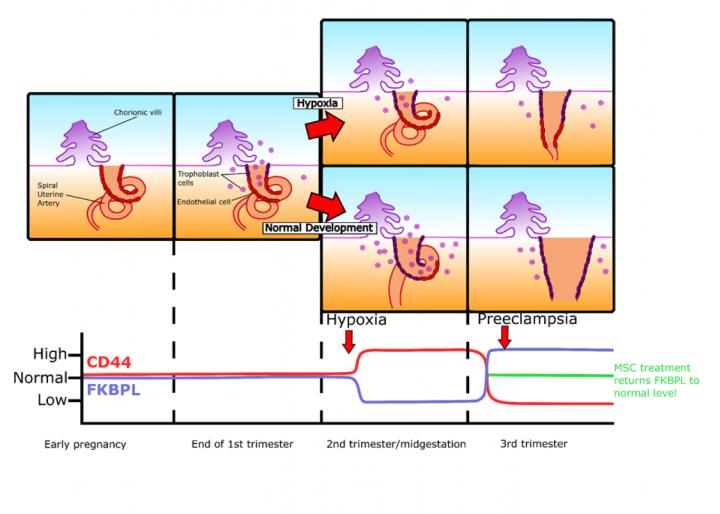 IMAGE: Summary of changes FKBPL and CD44 changes throughout gestation in pregnancies complicated by pre-eclampsia.

Preeclampsia is a devastating disorder that occurs very suddenly in the second half of pregnancy and causes severe health problems for both mother and baby. Preeclampsia also increases the risk of developing life-long chronic diseases such as diabetes and heart disease.

The discovery of two novel biomarkers, called FKBPL and CD44, has the potential to change the way the condition is managed according to research published in the Journal of Clinical Endocrinology and Metabolism. Preeclampsia can cause high blood pressure and organ failure in mothers and lead to preterm births and even stillbirth.

Senior author, Dr Lana McClements from the University of Technology Sydney, said the biomarkers can be used to diagnose and assess the risk of getting preeclampsia in both early and late pregnancy, "in women who otherwise appear healthy".

"The vast majority of the current screening and monitoring strategies are focused on early-onset preeclampsia, which comprises only 10-15% of all preeclampsia cases, whereas late preeclampsia has been largely neglected," she said.

The researchers say the two biomarkers are particularly useful for diagnosing cases of late-onset preeclampsia, between the second and third trimester, a period that currently lacks reliable biomarkers.

" The biomarkers allow the prediction of irregular placenta or maternal vascular function, which are key underlying causes of preeclampsia.

"This could lead to the early diagnosis and prevention of severe preeclampsia and associated complications including death, therefore also giving insight into disease mechanisms and possible treatment targets," Dr McClements said.

" This is why we are so excited by the discovery. In addition to their use in diagnosis, FKBPL and CD44 also show potential as drug and cell therapy targets of emerging treatments for preeclampsia, which offers hope for a future cure to this terrible disorder," Dr McClements said.