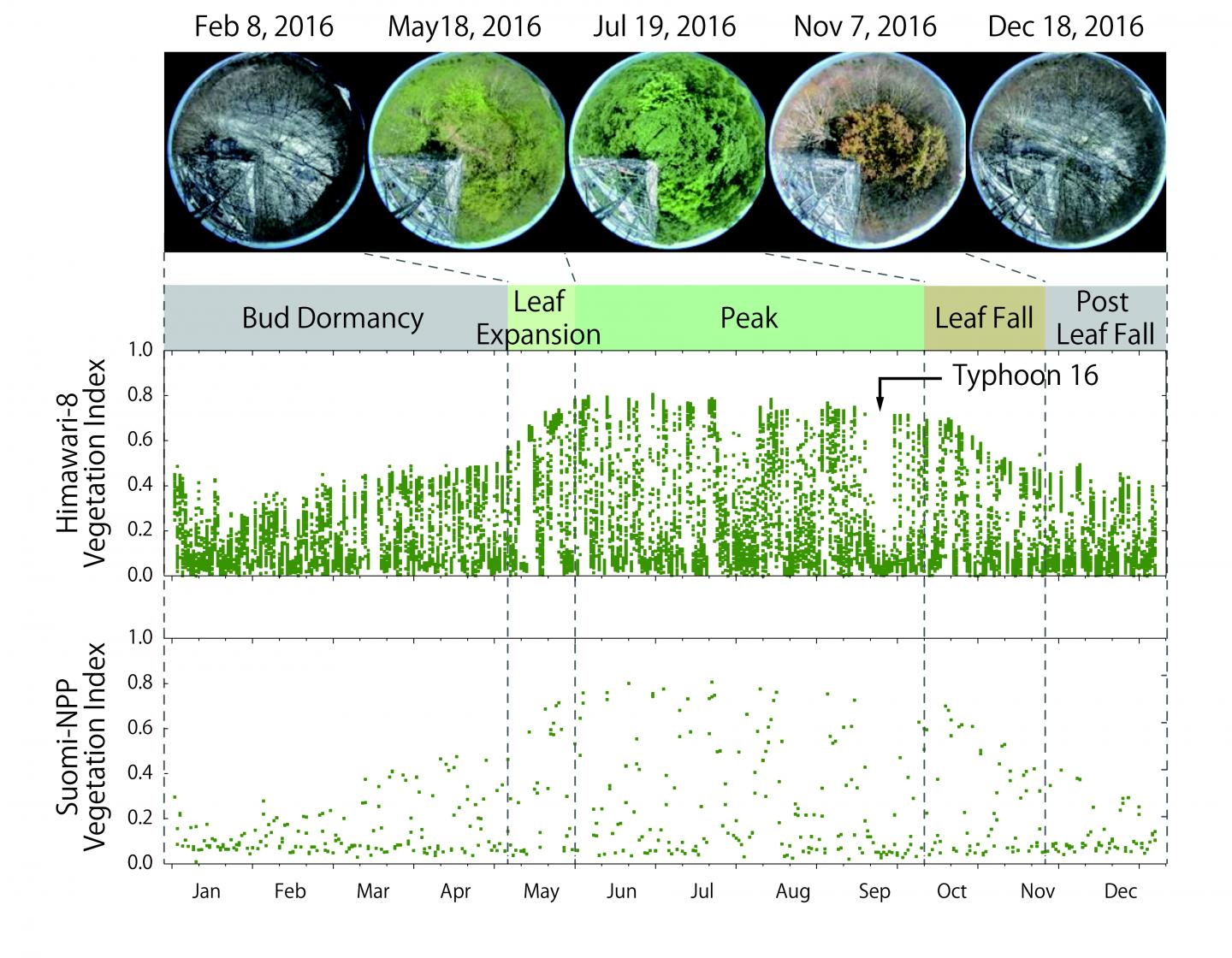 Satellite remote sensing has widely been used to monitor and characterize the spatial and temporal changes of the Earth's vegetative cover. Satellites used in these analyses have conventionally been polar-orbiting satellites, which orbit from "pole to pole" and obtain only one to two images of the Earth per day. The utility of these polar-orbiting satellites has, however, often been limited because frequently occurring clouds block their view of the land surface.

New-generation geostationary satellites present an opportunity to observe land surfaces in a more efficient manner. Being in geostationary orbit, the Advanced Himawari Imager (AHI) sensor onboard Himawari-8, for example, can obtain multi-band color images over Japan every 10 minutes, increasing the chance of obtaining "cloud-free" observations. In a new study published in Scientific Reports, an international team of researchers, including Tomoaki Miura from University of Hawaii, Shin Nagai and Mika Takeuchi from Japan Agency for Marine-Earth Science and Technology, Kazuhito Ichii from Chiba University, and Hiroki Yoshioka from Aichi Prefectural University, examined this possibility and the utility of Himawari-8 AHI geostationary satellite data for capturing seasonal vegetation changes in Central Japan.

"Detailed vegetation seasonal information from the Himawari-8 geostationary satellite can be useful for many applications such as short- term drought monitoring and assessing the impact of heavy rainfall events," said Prof Miura, the lead author of the study. "This study has shown that the Himawari-8 meteorological satellite can be used to monitor land surface and vegetation. With new-generation geostationary satellites, we may begin to see various types of vegetation changes that could not be seen with previous satellites. The new findings contribute to understanding land-atmosphere carbon dioxide budgets," said Prof Ichii of Chiba University, a co-author of this study.

The Himawari-8 AHI geostationary satellite also acquires multi-band color images over the tropical Southeast Asia region every 10 minutes. It is expected that AHI geostationary sensor data would contribute to improving our understanding of vegetation dynamics and the effect of climate change in this cloud-prone tropical region.