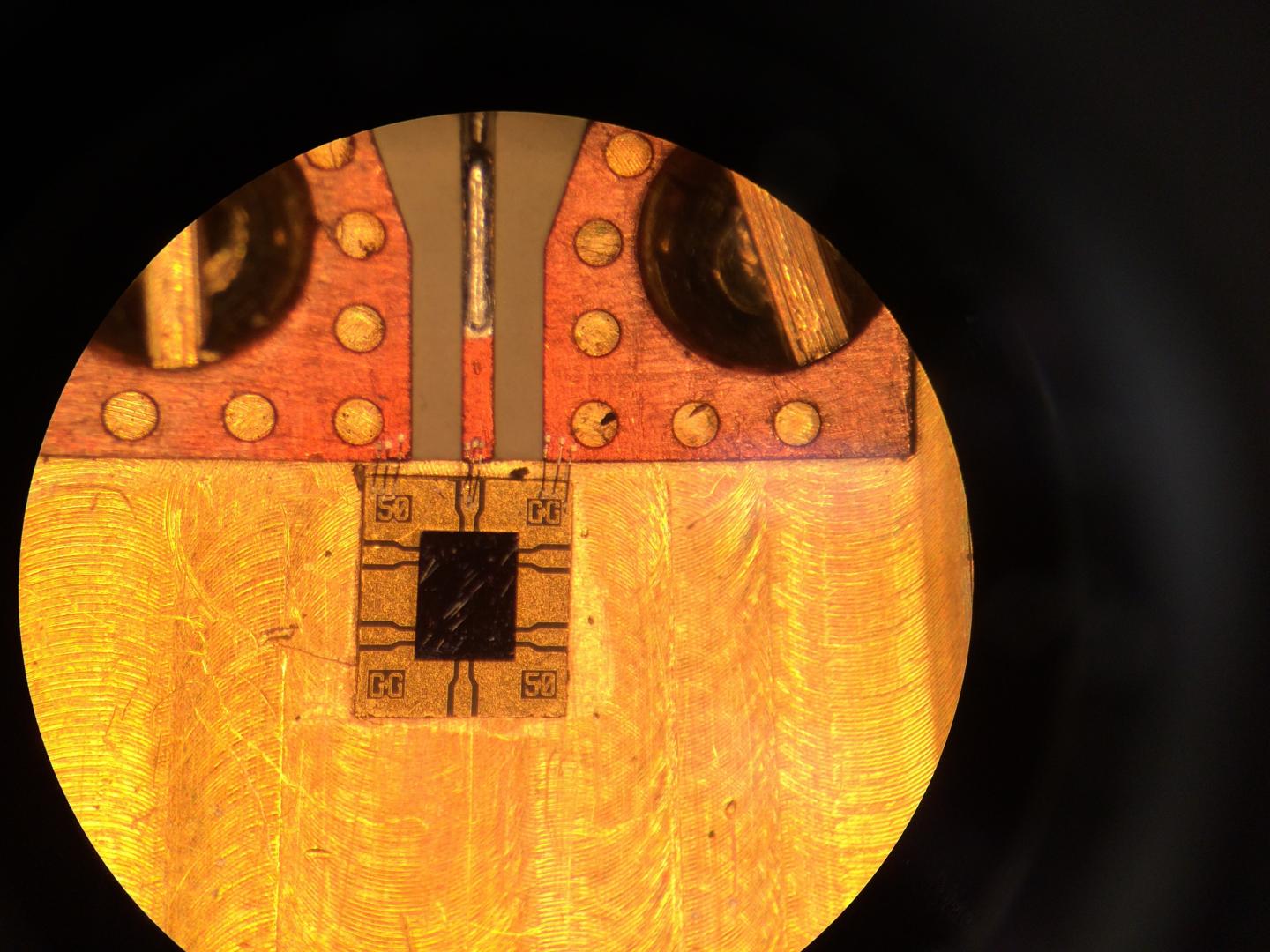 IMAGE: The black rectangle (center) is a high-speed, semiconductor photodiode that converts laser pulses to super-stable microwave frequencies. The diode is surrounded by a gold-coated border in which electrical leads are...

Researchers at the National Institute of Standards and Technology (NIST) have used state-of-the-art atomic clocks, advanced light detectors, and a measurement tool called a frequency comb to boost the stability of microwave signals 100-fold. This marks a giant step toward better electronics to enable more accurate time dissemination, improved navigation, more reliable communications and higher-resolution imaging for radar and astronomy. Improving the microwave signal's consistency over a specific time period helps ensure reliable operation of a device or system.

The work transfers the already superb stability of the cutting-edge laboratory atomic clocks operating at optical frequencies to microwave frequencies, which are currently used to calibrate electronics. Electronic systems are unable to directly count optical signals, so the NIST technology and techniques indirectly transfer the signal stability of optical clocks to the microwave domain. The demonstration is described in the May 22, 2020, issue of Science.

In their setup, the researchers used the "ticking" of two of NIST's ytterbium lattice clocks to generate light pulses, as well as frequency combs serving as gears to translate the higher-frequency optical pulses accurately into lower-frequency microwave signals. Advanced photodiodes converted light pulses into electrical currents, which in turn generated a 10 gigahertz (GHz, or a billion cycles per second) microwave signal that tracked the clocks' ticking exactly, with an error of just one part in a quintillion (1 followed by 18 zeros).This performance level is on par with that of both optical clocks and 100 times more stable than the best microwave sources.

"Years of research, including important contributions from NIST, have resulted in high-speed photodetectors that can now transfer optical clock stability to the microwave domain," lead researcher Frank Quinlan said. "The second major technical improvement was in the direct tracking of the microwaves with high precision, combined with lots of knowhow in signal amplification."

Optical waves have shorter, faster cycles than microwaves do, so they have different shapes. In converting stable optical waves to microwaves, the researchers tracked the phase--the exact timing of the waves--to ensure they were identical, and not shifted relative to one another. The experiment tracked phase changes with a resolution corresponding to just one millionth of a cycle.

"This is a field where just doubling microwave stability can take years or decades to achieve," group leader Chris Oates said. "A hundred times better is almost unfathomable."

Some components of the NIST system, such as the frequency combs and detectors, are ready to be used in field applications now, Quinlan said. But NIST researchers are still working on transferring state-of-the-art optical clocks to mobile platforms. The ytterbium clocks, which operate at frequencies of 518 terahertz (trillion cycles per second), currently occupy large tables in highly controlled laboratory settings.

Ultra-stable electronic signals could support widespread applications, including future calibration of electronic clocks, such as electric devices powered by oscillating quartz crystals. This is an important consideration for the redefinition of the international time standard, the SI second, now based on the microwave frequencies absorbed by the cesium atoms in conventional clocks. In the coming years, the international scientific community is expected to select a new time standard based on optical frequencies that other atoms, such as ytterbium, absorb. Super-stable signals could also make wireless communications systems more reliable.

Optically derived electronic signals could make imaging systems more sensitive. Radar sensitivity, particularly for slow-moving objects, is now limited by microwave noise and could be greatly enhanced. New photodiodes, produced in a collaboration between NIST and the University of Virginia, convert the optical signals to microwave signals more predictably and with lower noise than earlier designs. In addition, microwaves could carry signals from distant optical clocks for applications in navigation and fundamental physics research.

Astronomical imaging and relativistic geodesy, which measures the Earth's gravitational shape, are now based on detecting microwave signals at receivers around the world and combining them to form images of objects. Remote calibration of these receivers could make it possible to move the network from Earth into space, which would enhance image resolution and avoid atmospheric distortions that limit observation time. With hours of observing time instead of seconds, researchers could image many more objects.

Credit:
National Institute of Standards and Technology (NIST)
May 21, 2020