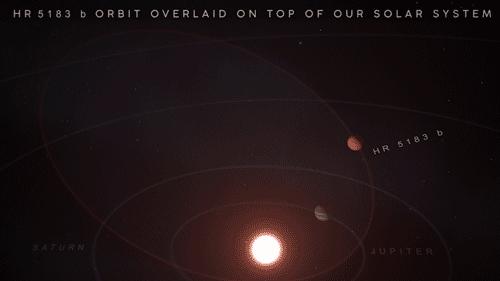 IMAGE: This illustration compares the eccentric orbit of HR 5183 b to the more circular orbits of the planets in our own solar system.

Maunakea, Hawaii - Astronomers have discovered a planet three times the mass of Jupiter that travels on a long, egg-shaped path around its star. If this planet were somehow placed into our own solar system, it would swing from within our asteroid belt to out beyond Neptune. Other giant planets with highly elliptical orbits have been found around other stars, but none of those worlds were located at the very outer reaches of their star systems like this one.

"This planet is unlike the planets in our solar system, but more than that, it is unlike any other exoplanets we have discovered so far," says Sarah Blunt, a Caltech graduate student and first author on the new study publishing in The Astronomical Journal. "Other planets detected far away from their stars tend to have very low eccentricities, meaning that their orbits are more circular. The fact that this planet has such a high eccentricity speaks to some difference in the way that it either formed or evolved relative to the other planets."

The planet was discovered using the radial velocity method, a workhorse of exoplanet discovery that detects new worlds by tracking how their parent stars "wobble" in response to gravitational tugs from those planets.

However, analyses of these data usually require observations taken over a planet's entire orbital period. For planets orbiting far from their stars, this can be difficult: a full orbit can take tens or even hundreds of years.

The California Planet Search, led by Caltech Professor of Astronomy Andrew W. Howard, is one of the few groups that watches stars over the decades-long timescales necessary to detect long-period exoplanets using radial velocity.

The data needed to make the discovery of the new planet were first provided by W. M. Keck Observatory in Hawaii. In 1997, the team began using the High-Resolution Echelle Spectrometer (HIRES) on the Keck I telescope to take measurements of the planet's star, called HR 5183.

"The key was persistence," said Howard. "Our team followed this star with Keck Observatory for more than two decades and only saw evidence for the planet in the past couple years! Without that long-term effort, we never would have found this planet."

The astronomers have been watching HR 5183 since the 1990s, but do not have data corresponding to one full orbit of the planet, called HR 5183 b, because it circles its star roughly every 45 to 100 years. The team instead found the planet because of its strange orbit.

"This planet spends most of its time loitering in the outer part of its star's planetary system in this highly eccentric orbit, then it starts to accelerate in and does a slingshot around its star," explains Howard. "We detected this slingshot motion. We saw the planet come in and now it's on its way out. That creates such a distinctive signature that we can be sure that this is a real planet, even though we haven't seen a complete orbit."

The new findings show that it is possible to use the radial velocity method to make detections of other far-flung planets without waiting decades. And, the researchers suggest, looking for more planets like this one could illuminate the role of giant planets in shaping their solar systems.

Planets take shape out of disks of material left over after stars form. That means that planets should start off in flat, circular orbits. For the newly detected planet to be on such an eccentric orbit, it must have gotten a gravitational kick from some other object.

The most plausible scenario, the researchers propose, is that the planet once had a neighbor of similar size. When the two planets got close enough to each other, one pushed the other out of the solar system, forcing HR 5183 b into a highly eccentric orbit.

"This newfound planet basically would have come in like a wrecking ball," says Howard, "knocking anything in its way out of the system."

This discovery demonstrates that our understanding of planets beyond our solar system is still evolving. Researchers continue to find worlds that are unlike anything in our solar system or in solar systems we have already discovered.

"Copernicus taught us that Earth is not the center of the solar system, and as we expanded into discovering other solar systems of exoplanets, we expected them to be carbon copies of our own solar system," Howard explains, "But it's just been one surprise after another in this field. This newfound planet is another example of a system that is not the image of our solar system but has remarkable features that make our universe incredibly rich in its diversity."