An electrode designed like a pomegranate – with silicon nanoparticles clustered like seeds in a tough carbon rind – overcomes several remaining obstacles to using silicon for a new generation of lithium-ion batteries, say its inventors at Stanford University and the Department of Energy's SLAC National Accelerator Laboratory.

"While a couple of challenges remain, this design brings us closer to using silicon anodes in smaller, lighter and more powerful batteries for products like cell phones, tablets and electric cars," said Yi Cui, an associate professor at Stanford and SLAC who led the research, reported today in Nature Nanotechnology.

"Experiments showed our pomegranate-inspired anode operates at 97 percent capacity even after 1,000 cycles of charging and discharging, which puts it well within the desired range for commercial operation." 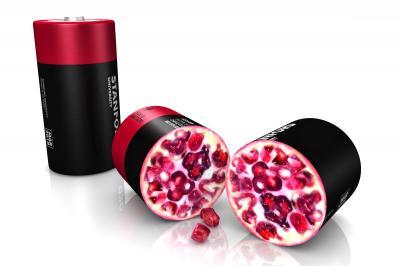 A novel battery electrode features silicon nanoparticles clustered like pomegranate seeds in a tough carbon rind. (This is an artistic concept, not representative of the actual battery.)

The anode, or negative electrode, is where energy is stored when a battery charges. Silicon anodes could store 10 times more charge than the graphite anodes in today's rechargeable lithium-ion batteries, but they also have major drawbacks: The brittle silicon swells and falls apart during battery charging, and it reacts with the battery's electrolyte to form gunk that coats the anode and degrades its performance.

Over the past eight years, Cui's team has tackled the breakage problem by using silicon nanowires or nanoparticles that are too small to break into even smaller bits and encasing the nanoparticles in carbon "yolk shells" that give them room to swell and shrink during charging.

The new study builds on that work. Graduate student Nian Liu and postdoctoral researcher Zhenda Lu used a microemulsion technique common in the oil, paint and cosmetic industries to gather silicon yolk shells into clusters, and coated each cluster with a second, thicker layer of carbon. These carbon rinds hold the pomegranate clusters together and provide a sturdy highway for electrical currents. 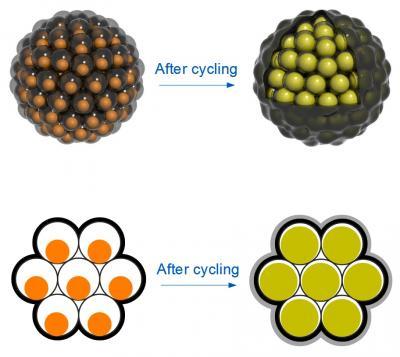 Left: Silicon nanoparticles are encased in carbon "yolk shells" and clustered like seeds in a pomegranate. Each cluster has a carbon rind that holds it together, conducts electricity and minimizes reactions with the battery's electrolyte that can degrade performance.

Right: Silicon nanoparticles swell during battery charging to completely fill their yolk shells; no space is wasted, and the shells stay intact.

And since each pomegranate cluster has just one-tenth the surface area of the individual particles inside it, a much smaller area is exposed to the electrolyte, thereby reducing the amount of gunk that forms to a manageable level.

Although the clusters are too small to see individually, together they form a fine black powder that can be used to coat a piece of foil and form an anode. Lab tests showed that pomegranate anodes worked well when made in the thickness required for commercial battery performance.

While these experiments show the technique works, Cui said, the team will have to solve two more problems to make it viable on a commercial scale: They need to simplify the process and find a cheaper source of silicon nanoparticles. One possible source is rice husks: They're unfit for human food, produced by the millions of tons and 20 percent silicon dioxide by weight. According to Liu, they could be transformed into pure silicon nanoparticles relatively easily, as his team recently described in Scientific Reports.

"To me it's very exciting to see how much progress we've made in the last seven or eight years," Cui said, "and how we have solved the problems one by one."

By precisely controlling the process used to make them, Stanford and SLAC researchers can produce pomegranate clusters of a specific size for silicon battery anodes.

Left: Microscopic clusters form a fine black powder that can be coated on foil to create an anode. Middle: A single cluster.

Right: In this close-up of a cluster, a silicon nanoparticle can be seen inside its yolk shell, with space to swell during battery charging.