A research group led by scientists from the University of Bristol has demonstrated the quantum operation of new components that will enable compact circuits for future photonic quantum computers.

Quantum computers, holding the great promise of tremendous computational power for particular tasks, have been the goal of worldwide efforts by scientists for several years. Tremendous advances have been made but there is still a long way to go.

Building a quantum computer will require a large number of interconnected components – gates – which work in a similar way to the microprocessors in current personal computers. Currently, most quantum gates are large structures and the bulky nature of these devices prevents scalability to the large and complex circuits required for practical applications.

This is a representation of a circuit for quantum information processing that makes use of multiport MMI devices. These circuits will be more compact and robust to fabrication tolerances compared to the current 2x2 portsdevices.

Recently, the researchers from the University of Bristol's Centre for Quantum Photonics showed, in several important breakthroughs, that quantum information can be manipulated with integrated photonic circuits. Such circuits are compact (enabling scalability) and stable (with low noise) and could lead in the near future to mass production of chips for quantum computers.

Now the team, in collaboration with Dr Terry Rudolph at Imperial College, London, shows a new class of integrated divides that promise further reduction in the number of components that will be used for building future quantum circuits.

These devices, based on optical multimode interference (and therefore often called MMIs) have been widely employed in classical optics as they are compact and very robust to fabrication tolerances. "While building a complex quantum network requires a large number of basic components, MMIs can often enable the implementation with much fewer resources," said Alberto Peruzzo, PhD student working on the experiment. 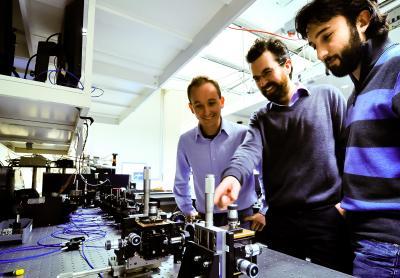 Until now it was not clear how these devices would work in the quantum regime. Bristol researchers have demonstrated that MMIs can perform quantum interference at the high fidelity required. 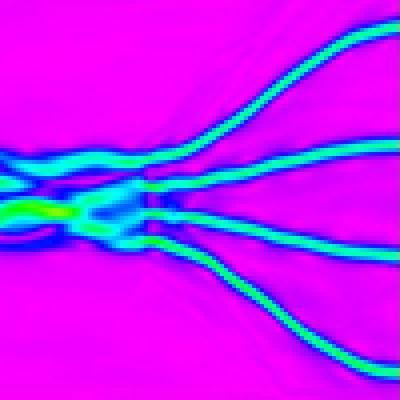 This is a simulation of classical light propagating in a multimode interference device. The multimode propagation results in equal intensity in each of the four output waveguides.