A team of University of Georgia researchers has developed a new biofuel derived from wood chips. Unlike previous fuels derived from wood, the new and still unnamed fuel can be blended with biodiesel and petroleum diesel to power conventional engines.

"The exciting thing about our method is that it is very easy to do," said Tom Adams, director of the UGA Faculty of Engineering outreach service. "We expect to reduce the price of producing fuels from biomass dramatically with this technique." 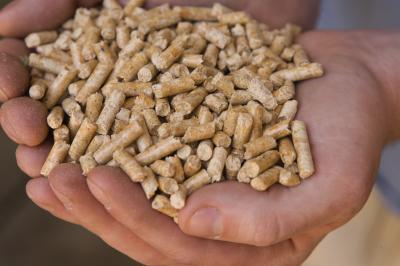 UGA researchers have developed a way to turn wood pellets such as these into fuel. Credit: Peter Frey/The University of Georgia

Adams, whose findings are detailed in the early online edition of the American Chemical Society journal Energy and Fuels, explained that scientists have long been able to derive oils from wood, but they had been unable to process it effectively or inexpensively so that it can be used in conventional engines. The researchers have developed a new chemical process, which they are working to patent, that inexpensively treats the oil so that it can be used in unmodified diesel engines or blended with biodiesel and petroleum diesel.

Here's how the process works: Wood chips and pellets – roughly a quarter inch in diameter and six-tenths of an inch long – are heated in the absence of oxygen at a high temperature, a process known as pyrolysis. Up to a third of the dry weight of the wood becomes charcoal, while the rest becomes a gas. Most of this gas is condensed into a liquid bio-oil and chemically treated. When the process is complete, about 34 percent of the bio-oil (or 15 to 17 percent of the dry weight of the wood) can be used to power engines. The researchers are currently working to improve the process to derive even more oil from the wood.

"This research will really benefit the citizens of the state, and that fits perfectly into the mission of a land grant institution," Adams said. "Georgia has 24 million acres of forested land, and we could see increased employment and tax revenues based on this research. Another huge benefit is that this fuel would reduce the amount of fuel we import from other states and from other countries."

Adams pointed out that the new biofuel also offers environmental benefits. The fuel is nearly carbon neutral, meaning that it does not significantly increase heat-trapping carbon dioxide in the atmosphere as long as new trees are planted to replace the ones used to create the fuel.

The researchers have also set up test plots in Tifton, Ga., to explore whether the charcoal that is produced when the fuel is made can be used as a fertilizer. Adams said that if the economics work for the charcoal fertilizer, the biofuel would actually be carbon negative.

"You're taking carbon out of the atmosphere when you grow a plant, and if you don't use all of that carbon and return some of it to the soil in an inert form, you're actually decreasing the amount of carbon dioxide in the atmosphere," Adams explained. "We're optimistic because in most types of soil, carbon char has very beneficial effects on the ecology of the soil, its productivity and its ability to maintain fertility."

Although the new biofuel has performed well, Adams said further tests are needed to assess its long-term impact on engines, its emissions characteristics and the best way to transport and store it.

"It's going to take a while before this fuel is widely available," Adams said. "We've just started on developing a new technology that has a lot of promise."