A new window to see hidden side of magnetized universe 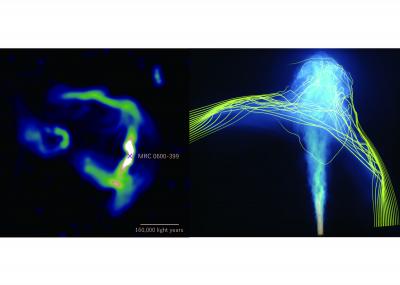 IMAGE: The bent jet structures emitted from MRC 0600-399 as observed by the MeerKAT radio telescope (left) are well reproduced by the simulation conducted on ATERUI II (right). The nearby galaxy...

New observations and simulations show that jets of high-energy particles emitted from the central massive black hole in the brightest galaxy in galaxy clusters can be used to map the structure of invisible inter-cluster magnetic fields. These findings provide astronomers with a new tool for investigating previously unexplored aspects of clusters of galaxies.

As clusters of galaxies grow through collisions with surrounding matter, they create bow shocks and wakes in their dilute plasma. The plasma motion induced by these activities can drape intra-cluster magnetic layers, forming virtual walls of magnetic force. These magnetic layers, however, can only be observed indirectly when something interacts with them. Because it is simply difficult to identify such interactions, the nature of intra-cluster magnetic fields remains poorly understood. A new approach to map/characterize magnetic layers is highly desired.

An international team of astronomers including Haruka Sakemi, a graduate student at Kyushu University (now a research fellow at the National Astronomical Observatory of Japan - NAOJ), used the MeerKAT radio telescope located in the Northern Karoo desert of South Africa to observe a bright galaxy in the merging galaxy cluster Abell 3376 known as MRC 0600-399. Located more than 600 million light-years away in the direction of the constellation Columba, MRC 0600-399 is known to have unusual jet structures bent to 90-degree angles. Previous X-ray observations revealed that MRC 0600-399 is the core of a sub-cluster penetrating the main cluster of galaxies, indicating the presence of strong magnetic layers at the boundary between the main and sub-clusters. These features make MRC 0600-399 an ideal laboratory to investigate interactions between jets and strong magnetic layers.

The MeerKAT observations revealed unprecedented details of the jets, most strikingly, faint "double-scythe" structure extending in the opposite direction from the bend points and creating a "T" shape. These new details show that, like a stream of water hitting a pane of glass, this is a very chaotic collision. Dedicated computer simulations are required to explain the observed jet morphology and possible magnetic field configurations.

Takumi Ohmura, a graduate student at Kyushu University (now a research fellow at the University of Tokyo's Institute for Cosmic-Ray Research - ICRR), from the team performed simulations on NAOJ's supercomputer ATERUI II, the most powerful computer in the world dedicated to astronomical calculations. The simulations assumed an arch-like strong magnetic field, neglecting messy details like turbulence and the motion of the galaxy. This simple model provides a good match to the observations, indicating that the magnetic pattern used in the simulation reflects the actual magnetic field intensity and structure around MRC 0600-399. More importantly, it demonstrates that the simulations can successfully represent the underlying physics so that they can be used on other objects to characterize more complex magnetic field structures in clusters of galaxies. This provides astronomers with a new way to understand the magnetized Universe and a tool to analyze the higher-quality data from future radio observatories like the SKA (the Square Kilometre Array).