A new way to look for life-sustaining planets 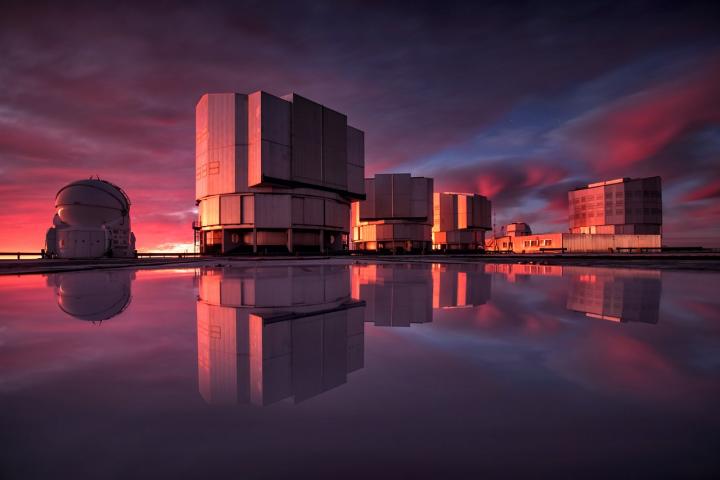 IMAGE: The Very Large Telescope, or VLT, at the Paranal Observatory in Chile's Atacama Desert. VLT's instrumentation was adapted to conduct a search for planets in the Alpha Centauri system as...

It is now possible to capture images of planets that could potentially sustain life around nearby stars, thanks to advances reported by an international team of astronomers in the journal Nature Communications.

Using a newly developed system for mid-infrared exoplanet imaging, in combination with a very long observation time, the study's authors say they can now use ground-based telescopes to directly capture images of planets about three times the size of Earth within the habitable zones of nearby stars.

Efforts to directly image exoplanets - planets outside our solar system - have been hamstrung by technological limitations, resulting in a bias toward the detection of easier-to-see planets that are much larger than Jupiter and are located around very young stars and far outside the habitable zone - the "sweet spot" in which a planet can sustain liquid water. If astronomers want to find alien life, they need to look elsewhere.

"If we want to find planets with conditions suitable for life as we know it, we have to look for rocky planets roughly the size of Earth, inside the habitable zones around older, sun-like stars," said the paper's first author, Kevin Wagner, a Sagan Fellow in NASA's Hubble Fellowship Program at the University of Arizona's Steward Observatory.

The method described in the paper provides more than a tenfold improvement over existing capabilities to directly observe exoplanets, Wagner said. Most studies on exoplanet imaging have looked in infrared wavelengths of less than 10 microns, stopping just short of the range of wavelengths where such planets shine the brightest, Wagner said.

"There is a good reason for that because the Earth itself is shining at you at those wavelengths," Wagner said. "Infrared emissions from the sky, the camera and the telescope itself are essentially drowning out your signal. But the good reason to focus on these wavelengths is that's where an Earthlike planet in the habitable zone around a sun-like star is going to shine brightest."

The team used the Very Large Telescope, or VLT, of the European Southern Observatory in Chile to observe our closest neighbor star system: Alpha Centauri, just 4.4 light-years away. Alpha Centauri is a triple star system; it consists of two stars - Alpha Centauri A and B - that are similar to the sun in size and age and orbit each other as a binary system. The third star, Alpha Centauri C, better known as Proxima Centauri, is a much smaller red dwarf orbiting its two siblings at a great distance.

A planet not quite twice the size of Earth and orbiting in the habitable zone around Proxima Centauri has already been indirectly detected through observations of the star's radial velocity variation, or the tiny wobble a star exhibits under the tug of the unseen planet. According to the study's authors, Alpha Centauri A and B could host similar planets, but indirect detection methods are not yet sensitive enough to find rocky planets in their more widely separated habitable zones, Wagner explained.

"With direct imaging, we can now push beneath those detection limits for the first time," he said.

To boost the sensitivity of the imaging setup, the team used a so-called adaptive secondary telescope mirror that can correct for the distortion of the light by the Earth's atmosphere. In addition, the researchers used a starlight-blocking mask that they optimized for the mid-infrared light spectrum to block the light from one of the stars at a time. To enable observing both stars' habitable zones simultaneously, they also pioneered a new technique to switch back and forth between observing Alpha Centauri A and Alpha Centauri B very rapidly.

"We're moving one star on and one star off the coronagraph every tenth of a second," Wagner said. "That allows us to observe each star for half of the time, and, importantly, it also allows us to subtract one frame from the subsequent frame, which removes everything that is essentially just noise from the camera and the telescope."

Using this approach, the undesired starlight and "noise" - unwanted signal from within the telescope and camera - become essentially random background noise, possible to further reduce by stacking images and subtracting the noise using specialized software.

Similar to the effect to noise-canceling headphones, which allow soft music to be heard over a steady stream of unwanted jet engine noise, the technique allowed the team to remove as much of the unwanted noise as possible and detect the much fainter signals created by potential planet candidates inside the habitable zone.

The team observed the Alpha Centauri system for nearly 100 hours over the course of a month in 2019, collecting more than 5 million images. They collected about 7 terabytes of data, which they made publicly available at http://archive.eso.org .

"This is one of the first dedicated multi-night exoplanet imaging campaigns, in which we stacked all of the data we accumulated over nearly a month and used that to achieve our final sensitivity," Wagner said.

After removing so-called artifacts - false signals created by the instrumentation and residual light from the coronagraph - the final image revealed a light source designated as "C1" that could potentially hint at the presence of an exoplanet candidate inside the habitable zone.

"There is one point source that looks like what we would expect a planet to look like, that we can't explain with any of the systematic error corrections," Wagner said. "We are not at the level of confidence to say we discovered a planet around Alpha Centauri, but there is a signal there that could be that with some subsequent verification."

Simulations of what planets within the data are likely to look like suggest that "C1" could be a Neptune- to Saturn-sized planet at a distance from Alpha Centauri A that is similar to the distance between the Earth and the sun, Wagner said. However, the authors clearly state that without subsequent verification, the possibility that C1 might be due to some unknown artifact caused by the instrument itself cannot be ruled out just yet.

"We are very grateful to the Breakthrough Initiatives and ESO for their support in achieving another steppingstone towards the imaging of Earthlike planets around our neighbor stars," said Markus Kasper, lead scientist of the NEAR project and a co-author on the paper.

The team intends to embark on another imaging campaign in a few years, in an attempt to catch this potential exoplanet in the Alpha Centauri system in a different location, and to see whether it would be consistent with what would be expected based on modeling its expected orbit. Further clues may come from follow-up observations using different methods.

The next-generation of extremely large telescopes, such as the Extremely Large Telescope of the European Southern Observatory, and the Giant Magellan Telescope, for which the University of Arizona produces the primary mirrors, are expected to be able to increase direct observations of nearby stars that might harbor planets in their habitable zones by a factor of 10, Wagner explained. Candidates to look at include Sirius, the brightest star in the night sky, and Tau Ceti, which hosts an indirectly observed planetary system that Wagner and his colleagues will try to directly image.

"Making the capability demonstrated here a routine observing mode - to be able to pick up heat signatures of planets orbiting within the habitable zones of nearby stars - will be a game changer for the exploration of new worlds and for the search for life in the universe," said study co-author Daniel Apai, a UArizona associate professor of astronomy and planetary science who leads the NASA-funded Earths in Other Solar Systems program that partly supported the study.